An iPhone app aggregating data from FourSquare and Facebook in order to show personal data around the user’s location has been pulled off the AppStore by its developer. The fact that FourSquare has decided to disallow it access to its technology has basically rendered it useless.

An iPhone app aggregating data from FourSquare and Facebook in order to show personal data around the user’s location has been pulled off the AppStore by its developer. The fact that FourSquare has decided to disallow it access to its technology has basically rendered it useless. 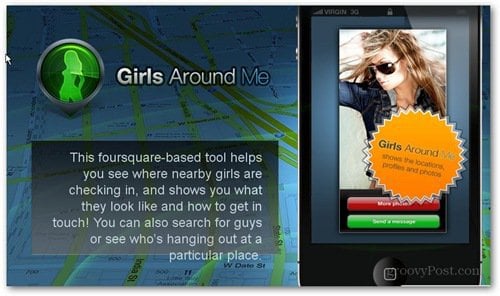 First, let’s see how it works. It’s actually quite a simple concept. It takes info women publish on FourSquare and pairs it with what they have on their Facebook profile.

The app’s official website says it “scans your surroundings and helps you find out where girls or guys are hanging out. You can also see the ratio of girls to guys in different places around you.”

Voila! Stalker’s paradise. The user knows where he can, basically, go and pick up women. Theoretically. In practice, it opens doors for lots of creepy behavior. Sexual predators could easily use it to find victims.

FourSquare has disallowed the app’s access to its services, so its developers had to take it off the AppStore.

Even so, the developer has defended it in a message sent to the Wall Street Journal, saying that it is unethical to find a scapegoat to talk about privacy concerns. The developer was quoted as saying the app’s “goals, purposes, abilities and restrictions” have been misunderstood.

He added that the app only offers information that’s already available publicly available. It only helps people find public venues in the vicinity.

iFree, the Russian developer of the app, also says that it would continue its development, but that it would limit it to showing only public places and venues. I’m really curious to see whether FourSquare will allow the use of its services in that situation.

For more on Internet privacy, which seems to be a popular topic these days, check out my article on Yahoo embracing Do Not Track.