Mozilla launched a major revision of its web browser Firefox today called Quantum. Let’s dig in and review the details of the announcement.

Firefox 57 has been in development for 6 months and is aimed at reclaiming losses to Google over the years, which has become the favorite of most users worldwide. But Chrome has been experiencing a bit of dislike among users who describe it begrudgingly as a memory hog; an issue Mozilla focuses on with the new multi-process architecture, which chops up background activities run by the browser in each tab and on the web pages.

Mozilla says users should see a boost of up to 30% performance as it uses less memory when loading a web page in a new window or tab. In addition to the under the hood improvements, users can expect a refreshed user interface that cleans up a bit of the clunkiness collected over the past decade. Called Photon, the new user experience is cleaner and easier to navigate. Common areas of the web browser such as Bookmarks, Synced tabs, Browsing History and Pocket lists are streamlined and better integrated.

It’s fast. Really fast. Firefox Quantum is over twice as fast as Firefox from 6 months ago, built on a completely overhauled core engine with brand new technology stolen from our advanced research group, and graced with a beautiful new look designed to get out of the way and let you do what you do best: surf a ton of pages, open a zillion tabs, all guilt-free because Firefox Quantum uses less memory than the competition. Your computer will thank you. Source 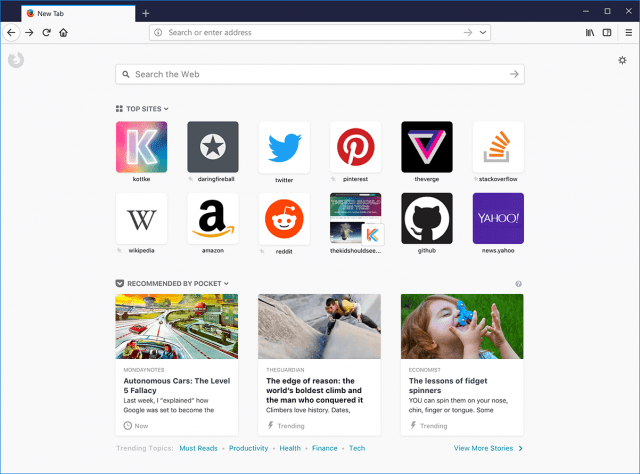 The new version comes with the new screenshot tool which Brian recently reviewed. There is also support for new web standards such as WebVR and better security using a new Tracking Protection mechanism; which blocks requests from websites that want to track you.

Users might want to think carefully about upgrading though. If you love Firefox Add-ons; a staple of the browser since the early days, you might want check if yours are supported. With the overhaul, something had to give and this was extensions written in XUL.

Firefox Quantum only supports web extensions at the moment and the last I checked there are only about 73 available. So, if you aren’t dependent on extensions like me, then you should be fine. Then again, it’s 2017 and you’re likely browser-agnostic like me, too. If you don’t find something new in the update, you can always jump over to Chrome.

This change is desperately needed to keep up with the rapid changes in browser development. Firefox 1.0 launched in 2004 and there really hasn’t been much that has changed since; except for the move to a rapid release similar to Google Chrome. I personally like Firefox because of how well it handles bookmark syncing. But, I am not rushing to upgrade just yet; since I depend on Grammarly and a couple other extensions.

Firefox 57 is available a free download for Windows, macOS, and Linux.