Fruit Ninja is one of the most popular game for mobile platforms. Now an awesome fan-made video has surfaced that shows a real-life fruit ninja to dubstep. 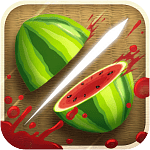 Halfbrick Studios has made a number of truly addictive games primarily for mobile devices with some of its more popular titles made available on console and handheld gaming devices. Out of all of Halfbrick’s games, Fruit Ninja probably takes the top spot in most gamer’s lists. Which is why a fan-made parody video of the game would do become so popular nearly overnight.

Film maker Scott DW teamed up with Halfbrick Studios — who also created Jetpack Joyride — to help create his awesome fan-made video, even creating his own dubstep track to be used in the video.

Many of the shots were done in slow motion, which shows just how impressive his skills are. The addition of dubstep into the video add another layer of awesomeness. What makes the video even more great is the surprise twist at the end of it, which we won’t spoil for you, but trust us when we say it’s worth finishing the video for.