Over the past decade, we’ve seen an explosion of innovation which has led to new products and services we couldn’t have dreamed of in the past. Although there are several explanations for this explosion, a key driving force has been a competitive market. In the technology arena, the hot product or service of today is usually outdated and sitting on the shelf no more than 18 months later – and that’s why I’m a passionate technologist!

Perhaps this is why I found myself particularly annoyed recently when I attended my local Rotary club meeting (rotary.org). The speaker of the day was Patrick Lynch, former Attorney General for the State of Rhode Island and spokesperson for FairSearch.org. On each table was a stack of colorful flyers from FairSearch.org. The flyers had graphs, statistics, and quotes, all aimed at exposing Google’s so-called misconduct as the dominant global search engine on the internet. Being techy, I was glad I didn’t miss the meeting. 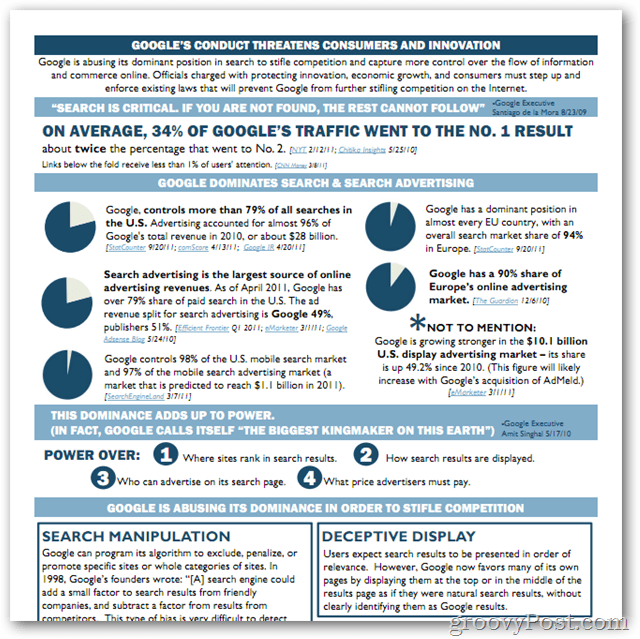 Reading over the flyer, it was obvious at the time that the information was a 1 sided attack against Google. Really? You can’t compete in the marketplace so now you’re going to try and attack Google from behind? Annoyed.

In line with the flyer, Lynch focused his presentation on Google and its anti-competitive practices, which according to Lynch, has allowed the company to maintain control of online searches. He claimed his organization FairSearch.org, had a number of members, including Microsoft; however, the group was made up of other concerned companies and citizens.

According to its website, FairSearch.org “is a group of businesses and organizations united to promote a healthy Internet future, where economic growth is driven by competition, transparency, and innovation in search verticals and online services.”

The call to action? Lynch urged all attendees to write letters to our state legislators and other officials urging them to take action against Google’s illegal practices.

After the meeting, I did some quick research to confirm my suspicion that this was all just a bunch of Google competitors who wanted to fight Google using politics vs. innovation. Here’s what I found.

FairSearch.org was founded in 2010 in response to Google’s attempted, now successful, purchase of the ITA flight data company. Founding members include the corporations most concerned with losing access to ITA’s information, such as Expedia and Kayak.

According to an email I received from Microsoft’s Jack Evans, Director of Public Relations, “Microsoft joined FairSearch.org in December 2010 to help raise awareness of how the Google-ITA merger could hurt travelers by slowing innovation and contributing to higher travel costs. As an ITA Software customer, we believe our ability to continue providing innovative ways for consumers to find the best flights at the lowest prices online rests on a competitive market for travel technology.” Microsoft is still involved in FairSearch.org, even though the ITA deal was approved in April of this year.

Google hasn’t been silent on FairSearch.org, producing some internal blog posts as well as webpages addressing specific claims made by FairSearch.org. in Google’s side of the conversation, I called Adam Kovacevich, Head of Competition and Public Policy and Public Affairs at Google.

Among other things, I asked Adam to comment on the claims of FairSearch.org regarding unfair business practices by Google. He said, “FairSearch is an organization created by Microsoft to oppose Google.”

Mr. Kovacevich also pointed me to The Association for Competitive Technology, another group that lobbies on behalf of Microsoft, as well as ICOMP (i-comp.org), which is an organization similar to FairSearch.org but with a more global focus.

I sought comment from FairSearch.org themselves, and my emails were returned by Ben Hammer of the public affairs firm Glover Park Group. According to Hammer, “It’s worth noting that the coalition’s founding members when it launched in October 2010 were Expedia and its brands HotWire and TripAdvisor, KAYAK, Sabre and its brand Travelocity, and Farelogix. Microsoft wasn’t even a member until December 2010.”

The information that FairSearch.org presents on its website and through its online fact sheet I was given at the Rotary event mentions specific claims of injustice which Google actively practices. These include the ability to manipulate search results through algorithms and the practice of displaying search results involving Google’s own properties, such as maps and shopping results, ahead of the competition. I asked Mr. Hammer why his group thought it was wrong for Google to engage in these practices when Microsoft’s own search engine, Bing, and probably Yahoo! did the same thing.

He responded, “Our nation’s antitrust laws protect consumers and the free economy by preventing companies with a dominant position, and Google controls 70% of search and search advertising in the U.S. and more than 90 percent in Europe, from abusing that power to advantage and extend its power over the market by disadvantaging competitors”. In other words I stated, “Google has to act differently because of their market share.” Yes, confirmed Mr. Hammer. It appears Mr. Hammer feels Google has reached the status of a monopoly, yet his own colleague at FairSearch.org, Patrick Lynch, disagrees.

During a local radio interview with host Mark Johnson Mr. Lynch admitted several times that Google was not a monopoly, though it was “dangerously close.” He said, “You have a responsibility, like any company, to properly display what you are and operate in a way that promotes competition [and] provides a level playing field.” He then cited the example of a local florist quoted in a newspaper article a few weeks earlier. The 7 Days (7dvt.com) publication quoted Jon Houghton of Maplehurst, a Florist in Essex Junction, VT, as saying, “I used to pop up at the top when you Googled florists in Essex. Now, when I do a search, it comes back with a whole list of florists above me — eight of them not even based in Vermont. I’m the most longstanding florist in Vermont. How do you get more legitimate than that?”.

If only it was that easy, Mr. Houghton. Although longevity is a piece of SEO, it’s only one component as thousands of other factors go into being #1 on any Search Engine Query.

Microsoft doesn’t always take such a formal or backdoor approach and has produced the short video “Gmail man,” which takes a comical jab at Google’s Gmail service, a direct competitor it its Windows Live Hotmail Service.

I would argue that Google has achieved market leadership through innovation and quality, not deceptive practices Microsoft and its competitors would want you to believe.

Microsoft has built an empire on quality innovation for both consumers and corporations and if Microsoft wants to stay relevant, they need to continue this tradition and bring quality products to market vs. attacking its competitors using underhanded methods like Fairsearch.org.

I do believe it’s important for governments to maintain a healthy and level playing field for companies and should take action when they engage in unfair or unethical business practices against the market or consumers. So long as its objective and without a preconception of guilt, as FairSearch.org has asserted, I agree.

What do you think? Has Google done something wrong by leveraging its successful products to continue to grow its business, or do you think they are being unfair or unethical to its competitors? I would love to hear your opinion on this piece in the comments!