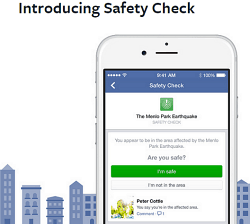 Facebook announced today that it is launching Safety Check, a tool that lets you notify friends and family if your safe during a natural disaster.

Facebook announced today that it is launching a new tool that lets you notify friends and family if your safe during a natural disaster. It’s called Safety Check and if you happen to be in an area where a natural disaster occurs, Facebook will pop up an alert asking if you’re safe. 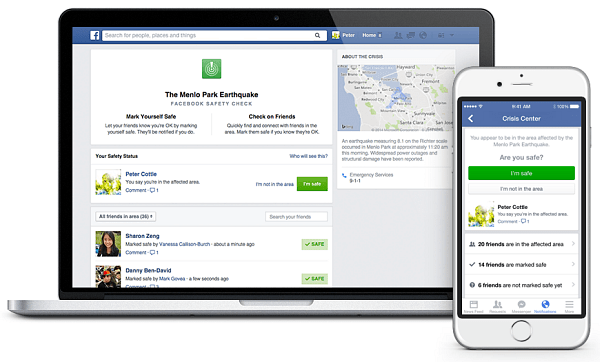 Apparently the idea for this came from a disaster message board that Facebook engineers created in after the earthquake and tsunami hit Japan in 2011.

According to Facebook, once you activate Safety Check: “We’ll determine your location by looking at the city you have listed in your profile, your last location if you’ve opted in to the Nearby Friends product, and the city where you are using the internet.”

Also, if you have friends who are in an area where a natural disaster occurs, you’ll be able to receive notifications from them as to whether they’re safe or not.

It’s rolling out to all Facebook users in the coming weeks, and will be available on your computer and mobile device via the Facebook app. Apparently even the low-end feature phones that are popular in the developing world will be able to use it too.

This seems like a good idea since there are so many users on on Facebook already. However, I am curious to what else is behind this, and how it will benefit Facebook. Under the guise of being a helpful app for mankind, it seems that it will keep track of where you are all of the time more than it does already. Of course that data will be collected and more relevant ads served up. Cynical I know, but I always consider the ulterior motives are whenever Facebook introduces something new.

What do you think about Facebook’s upcoming Safety Check feature? Leave a comment below and tell us about it.