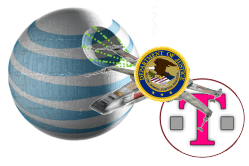 A little over 5 months ago AT&T publicly announced their agreement with Deutsche Telekom for the $39 billion purchase of T-Mobile USA.  But, despite their plans –it might not work out….  Hopefully you’re not a T-Mobile customer waiting for an iPhone because earlier this week the U.S. Department of Justice filed suit to block the merge from taking place.  Unfortunately, this isn’t the first time AT&T has been up against the DOJ so I probably don’t need to tell you where my money would lie if I was a betting man…

For full coverage of the Department of Justice’s complaint, check out the official pdf copy.  It’s 21 pages long, so if you’d rather just checkout the highlights – we have them below.

“The merged firm would have approximately 132 million connections to mobile wireless devices in the United States, with more than $72 billion in mobile wireless telecommunications services revenues.”

“In 2010, revenues from the sale of mobile wireless telecommunications services in the United States were approximately $160 billion.”

“unless this acquisition is enjoined, customers of mobile wireless telecommunications services likely will face higher prices, less product variety and innovation, and poorer quality services due to reduced incentives to invest than would exist absent the merger.”

“In AT7T’s revenues from mobile wireless telecommunications services were $53.5 billion, and its total revenues were more than $124 billion.”

“Although smaller providers exist, they are significantly different from these four.  For instance, none of the smaller carrier’ voice networks cover even one-third of the U.S. population, and the largest of these smaller carriers has less than one-third the number of wireless connections.”

So what do you think?  Will the deal go through?  Do you think the DOJ should let this ride or nuke?