If you’re a gamer and fan of BioShock, chances are you’re doing your best to wait for the followup. And you check out the first few minutes of the game now.

If you’re a gamer and fan of BioShock, chances are you’re doing your best to wait for the followup, BioShock Infinite to be released in March 2013. The game’s release date has been pushed back a few times, but I’m sure it’ll worth the wait, especially after seeing today’s video showcasing the first few minutes of the next release. 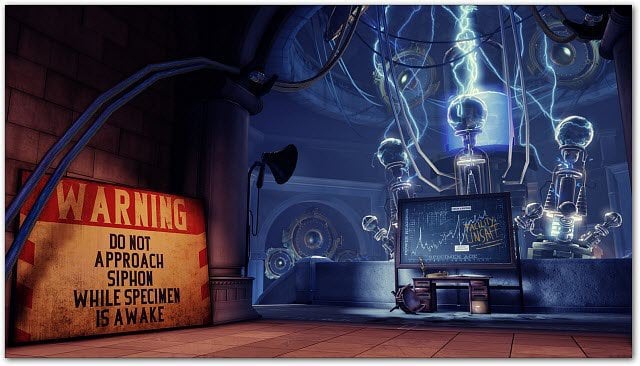 I should warn you, the following video includes some light spoilers, and you may want to steer clear from if you’re looking to go into BioShock Infinite fresh. But for the fanatics, I can tell you the following video doesn’t give too much away and it’s definitely worth spoiling the first few minutes for.

The video released by Irrational Games takes us through the opening moments in BioShock Infinite. The video starts off with Booker Dewitt on a boat being rowed by a man and a woman, who are discussing Booker and the storm they’re in the middle of. The woman on the rowboat hands Booker a box with his name on it and indicates he was in the military as the words “7th Cavalry, Wounded Knee” can be seen on the box. Upon opening the box, there’s a pistol, a pamphlet to “Monument Island,” and a photo of a woman with the words “Bring to New York Unharmed.”

At this time, you can see just how gorgeous the game is shaping up to be, especially when you consider it’s running on the Xbox 360. The water and light effects are amazing and at one point, we catch some water droplets on Booker’s hand.

Booker finally reaches his destination to what we believe may be this “Monument Island” Booker had a pamphlet to in his box. Booker makes his way up the lighthouse, and that’s where things get interesting. We won’t spoil the rest of the video for you, but we can tell you after watching it a bunch of times, we can’t wait until March 2013 for BioShock Infinite’s release.