Amazon has done what even Kryptonite couldn’t. It’s made the nation’s largest brick-and-mortar book retailer, Barnes& Noble, kick Superman to the curb. The Man of Steel and other heroes of DC Comics –Batman, Green Lantern, the Sandman and Watchmen — will no longer be at B&N, which is responding to an exclusive deal Amazon struck for 100 popular strips on its upcoming Amazon Kindle Fire. YOW! 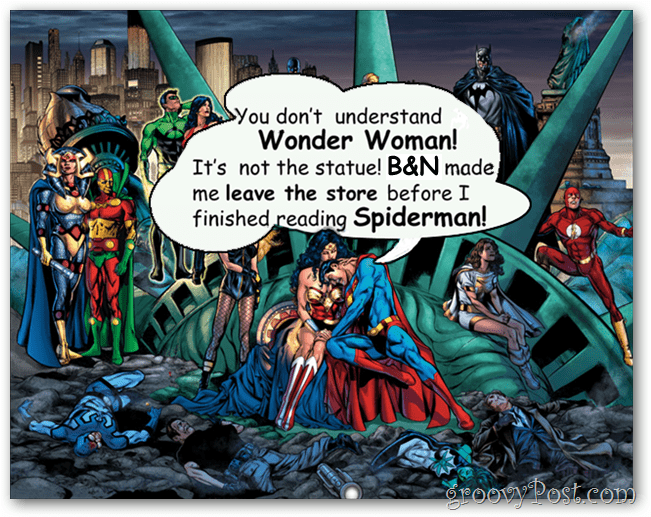 The deal Amazon struck with DC Comics gives the upcoming Amazon Kindle fire the exclusive rights to 100 plus popular graphic novels. As a result, B&N removed all copies of DC comics and hard-cover books from all its 1,300 stores. Just like that. POW! BAM! That’s got to hurt.

Understandably, book retailers don’t want to let Amazon use them as a retail showroom for comics they then might buy off the Kindle Fire electronically.

For DC Comics, that long-time creator of action comics, losing big retailers is hardly a big win. The New York Times quoted NinjaZilla, who posted an ironic lament on a web site devoted to comics:

What will (I) and my poor iPad do? I’m so sorry, DC! Because it is not like I can download all those comics for free — oh, wait, yes I can — and now I guess I will and maybe I will download every comic DC produces while I’m at it.

KAPOW! If you’re into classic comics, I’d love to know. Are you glad or annoyed that Amazon and DC have an exclusive deal that’s driving the comics you love out of regular retail stores? Would you buy an Amazon Fire for comics? I’d love to hear your comments below in my informal poll, here. Stay tuned — same bat time, same bat channel. Metaphorically, anyway.