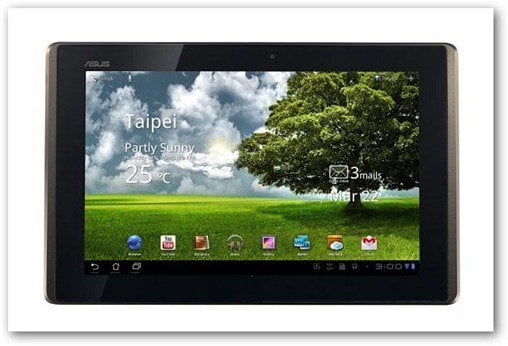 As much as that title sounds like a restaurant scene in a science fiction movie, it actually means great news for fans and owners of one of the most beloved Android tablets out there.

Even if Asus has already released the follow-up, called Transformer Prime, and is upgradeable to Android Ice Cream Sandwich (ICS) and sporting a quad-core CPU, the dual-core Eee PadTransformer still has impressive specs. And, to be frank, there’s not much you can use a quad-core CPU on a tablet (at the moment, at least).

The good news is that the upgrade has stopped being a rumor. Asus North America was asked by a user on its Facebook page when the upgrade would be available. The company answered that the update is in the approval process by Google and would be pushed as soon as it’s done.

Then, the representative came back, saying that the update will probably come in mid-February for the Transformer.

And that’s not the only good news the company had. It added that the Eee Pad Slider would also get the update, but will happen after the Transformer gets it.

I for one can’t wait to see these devices running ICS. I’ve seen it run on the Prime and I think that’s how an Android tablet should feel.

And since we’re talking about tablets, here’s how to use Windows 7 and Office 2010 on an iPad.