If you turn on your Apple TV (2nd or 3rd gen) you should see the new FX Now channel in the lineup. And this time Apple TV gets the channel before Roku

If you turn on your Apple TV (2nd or 3rd gen) you should see the new FX Now channel in the lineup. While Roku usually touts the availability of more channels in its lineup compared to Apple and Amazon’s Fire TV, this time Apple has a slight edge, for its set-top box anyway. 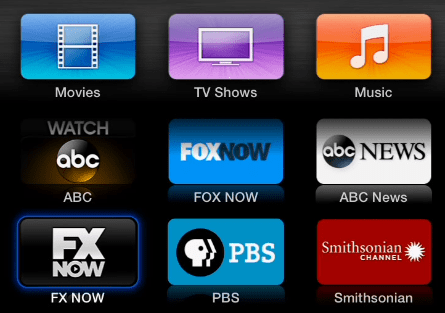 FX is known for the popular TV shows Sons of Anarchy, American Horror Story, Fargo, and more, including the Simpsons. Previously FXX Networks acquired the rights to broadcast The Simpsons first 24 seasons and the app is due to start streaming all 530 episodes sometime this in October.

The FX Now channel requires you to authenticate a cable subscription to access the content. It looks like the big companies in the U.S. are on board. Companies like AT&T U-Verse, Comcast Xfinity, Time Warner, Cox, and other smaller providers.

You can get a full list of participating cable providers here. As regular readers know, I live in the sticks of rural Minnesota, and am lucky to get DSL and cable TV. Luckily, my small provider is on the list and I will be checking out this new app over the coming days.

You don’t need to do an update to get the FX Now channel, it should just show up as part of your lineup. However, when I fired up my Apple TV (2nd generation) it didn’t appear. So I did a hard reset of the box and when it came back it was present.

After you check out the FX Now channel, leave a comment below and let us know your thoughts on it.