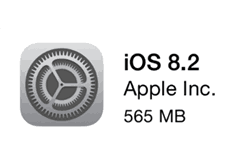 This week Apple released iOs 8.2 — its largest update for iOS 8 to date. The update can be installed on the iPhone 4s and later, iPad Touch (5th generation) and iPod 2 and later. As with all updates, the question is… should you install it?

iOS 8.2 is packed full of updates, bug fixes and security fixes. Oh, and of course a new app which you won’t be able to remove – the Apple Watch. Specifically, the update includes improvements to the Health App, Stability enhancements for the Music, Mail and Maps apps and fairly significant bug fixes in the Mail, Maps and Calendar apps. Let’s take a deeper look at the details. 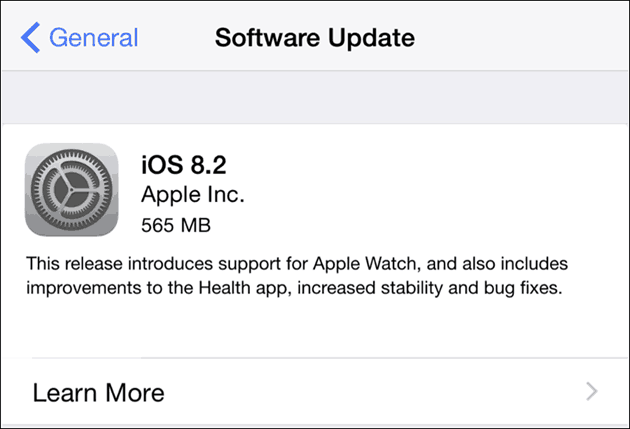 The size of the update depends on your device however on my iPhone 6 Plus, the update was 565 MB. Not bad overall as long as you have the drive space. If you’re bothered with “not enough drive space” head over to Settings > General > Usage > Manage Storage for a report on what’s taking up all the space on your device. In regards to time-to-upgrade, if you have the space, the update should take no longer than 3-5 minutes.

As mentioned earlier, iOS 8.2 contains the following updates to support the new Apple Watch on iPhone 5 and later:

As with most iOS updates from Apple, iOS 8.2 is also packed full of Security updates. If you want more details on the security updates included in the release, visit this Apple KB article – https://support.apple.com/en-us/HT204413. 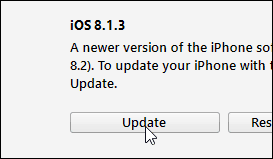 Although I normally like to take things slow with iOS updates, my recommendation is to go ahead with the 8.2. Included are several key bug fixes and stability updates you really don’t want to miss, not to mention security patches. Although the update doesn’t mention performance updates for older devices… past experience shows Apple likes to slip that in from time-to-time. With that in mind, if you have a 4S device, would love to hear how 8.2 performs on your device after the update.