The year 2017 ended on a brutal note for Apple in regards to security. The iPhone maker has always prided itself on its sterling track record on security. But security flaws showed up in the latest version of its desktop operating system, macOS High Sierra, version 10.13 in late November 2017.

While iOS updates are known for the usual bug fixes, performance and feature improvements, this release is one you probably want to do your utmost best to download as soon as possible. Spectre and Meltdown are severe vulnerabilities that affect how the brains of your iOS device execute code. This hole opens up your device making it possible for hackers to access sensitive information such as passwords, pictures, and banking information. 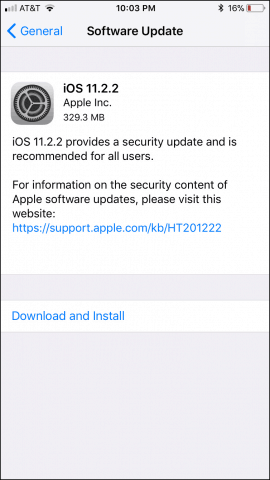 The iOS 11.2.2 update is just 64 MBs and is available for devices such as the iPhone 5s and later, iPad Air and later, and iPod touch 6th generation. Users can download the update by connecting to a wireless network, launch Settings > General > Software Update then tap Download and install.

The update specifically targets Spectre and Meltdown, so, no additional surprises there. Apple’s other devices such as Apple Watch and Apple TV are not affected by this flaw. If you use a Mac, there is also a Spectre update for your system.

Usually, at this point in the article, we ask whether you should upgrade now or wait it out a bit. But this time around, we recommend you jump on this update right away. You might want to make a quick backup just in case something bad happens. Last month, while attempting to install 11.2.1, I experienced some issues on my iPhone 6s.

The update failed a couple times during installation but automatically recovered. It has been revealed that Apple started mitigating the Meltdown attack in 11.2. This might have been the contributing factor to the long time it took to install – just speculating of course. Although Apple and other software firms and Internet companies were aware of the problem as far back as summer 2016, it was eventually leaked out. There is a possibility that hackers might be trying to cook up something quickly to cause damage, especially for high profile platforms such as iOS and Windows.

So, grab this update as soon as you can and report back in the comments your experience with the update.