According to Booz & Company’s annual study of R&D spending, Apple is the most innovative company in the world for the third year in a row.

Apple is the world’s most innovative company, according to a survey that’s part of Booz & Company’s R&D spending study. Not only has Apple led for the third year in a row, it actually increased its lead substantially. 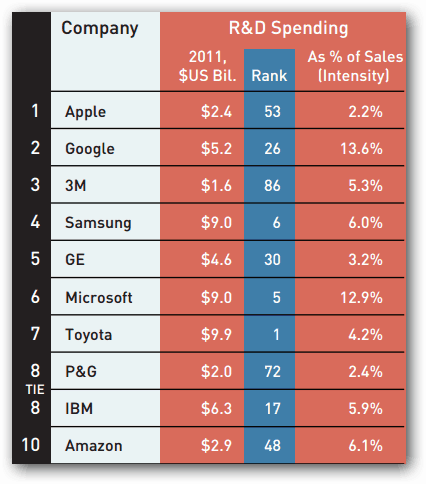 The annual study reveals the top companies in terms of investment in research & development, as well as how that money is spent, or which industry spends more in said field. It’s a pretty interesting read, and you can check out the PDF here.

A part of the study involves determining the world’s most innovative companies. These are decided by survey participants which include executives from 700 companies.

For the third year in a row, Apple has topped the most innovative company chart, followed by Google, and 3M came in third place. Apple’s arch rival Samsung came in fourth, GE was fifth, and Microsoft was sixth.

Another interesting fact is that over 80% of respondents named Apple one of the three most innovative companies, which is up from over 70% last year. Google is listed as second, with 43% of respondents putting it in the top three.

What I found very interesting is the lack of correlation between investment in R&D and the position in this innovation chart. Just take a look at the companies spending the most money on R&D in 2011. 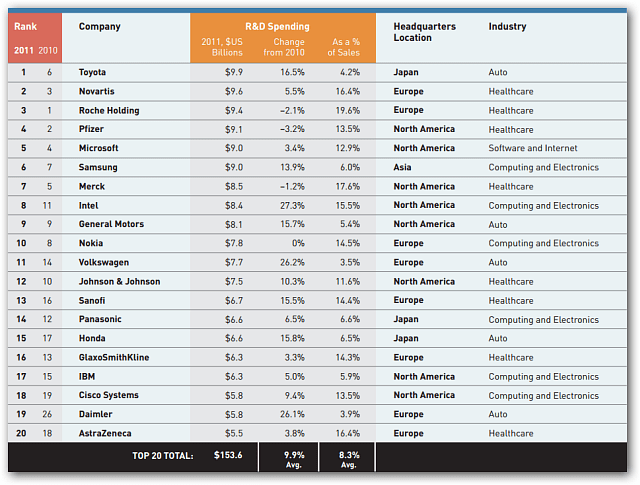 I wonder if that means that spending money wisely does more for a company. Or does it mean that good marketing does more than huge investments in R&D?

Another interesting point to note is that Amazon was included in the top 10 list of most innovative companies for the first time — knocking Facebook out of the top 10.