Friday 2/21/2014, Apple released security update IOS 7.0.6 for its iPhone, iPad and iPod devices to fix a vulnerability which allows an attacker to capture and modify secure web traffic from the devices. Have you fixed your device yet?

Friday 2/21/2014, Apple released security update iOS 7.0.6 for its iPhone, iPad and iPod devices to fix a vulnerability which allowed an attacker to capture and modify secure web traffic from the devices. Yeah, not good.

Impact: An attacker with a privileged network position may capture or modify data in sessions protected by SSL/TLS

Description: Secure Transport failed to validate the authenticity of the connection. This issue was addressed by restoring missing validation steps.

The update is available from your device via Settings –> General –> Software Update on iPhone 4 and later, iPod Touch (5th Gen) and iPad 2 or later. Apple also released iOS 6.1.6 for the iPhone 3GS and iPod touch (4th Gen) devices. So if you still have a device make sure to get it updated as well. 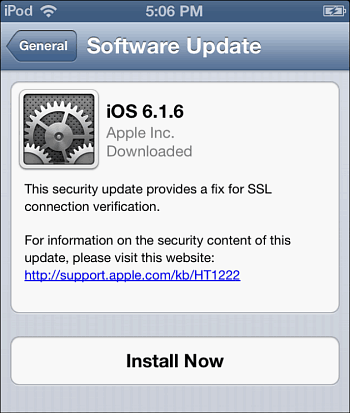 So… are you updated yet?