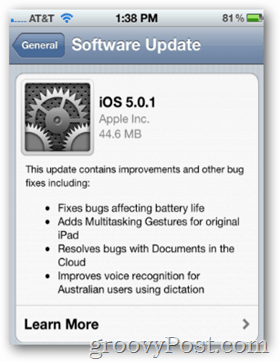 Apple released their first update to the new iOS Version 5 yesterday — iOS 5.0.1. The update from Apple includes multitasking gestures for the original iPad,  bug fixes with Documents in the Cloud and improved voice recognition for Australian users. The largest update however for most of us is a fix for bugs which were affecting the battery life of all devices running iOS 5.0 — iPhone 4S users in particular.

I’ve been tracking the release of the iOS 5.0.1 update for some time and many developers using the beta said they noticed significant battery improvements, but users on Apple’s support forums are saying just the opposite. It’s still too early for me to tell if the battery drain issues have been resolved with this latest update however I’ll keep everyone updated on my finding over the next week or two.

That said, there are still many variables with iOS 5.0.1 which can contribute to short battery life so if you’re still having issues be sure to checkout my comprehensive guide to extending iOS device battery life.

iOS 5.0.1 also included a security fix for the iPad 2 Smart Cover vulnerability that we reported a couple weeks back. I confirmed that you can no longer get into the iPad without a security passcode using the Smart Cover hack.

How has iOS 5.0.1 been working for you? We’d love to hear your experience with it in the comments.