Apple rushed this minor iOS update to release without even beta testing. Read on to find out if you should update.

In an uncharacteristic turn, Apple has been releasing some rather spotty minor mobile OS releases starting with iOS 11.2. iOS 11.2.6 is the developer’s latest effort at trying to play catch up from a security and bug fix standpoint. iOS 11.2 was conspicuously silent on its security content; then we saw iOS 11.2.2 get pushed out to address one facet of the Spectre vulnerability. Then, Apple jogged past 11.2.3 and 11.2.4 and skipped right to iOS 11.2.5, which patched a vulnerability in Messages but apparently introduced a whole other set of issues.

iOS 11.2.6 hit the streets without even going to beta to patch a vulnerability where receiving a certain Telugu character via Messages could crash your entire device. Nice.

So, should you upgrade to iOS 11.2.6? If you’re currently on iOS 11.2.5, absolutely yes. However, note that the Telegu character vulnerability doesn’t affect iOS releases before iOS 11.2.5.

Here are some more details. 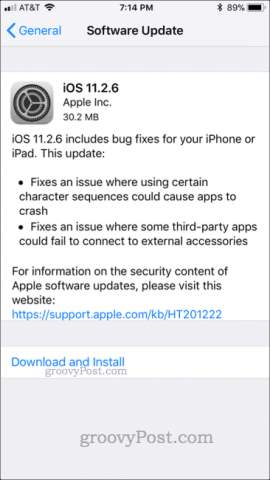 Compared to iOS 11.2.5, which weighed in at 178 MB, iOS 11.2.6 is teeny tiny. At just 30.2 MB, there are podcast episodes that are smaller than this update. It fixes the aforementioned bug where “certain character sequences could cause apps to crash” and it fixes an issue where some third-party apps “could fail to connect to external accessories.” I’m not sure on the details of the second one, but the Telugu character exploit is worth fixing.

There’s not much else, if anything at all, to this update. The link provided for more information on the security content of Apple software updates doesn’t actually provide any more information. It states:

For our customers’ protection, Apple doesn’t disclose, discuss, or confirm security issues until an investigation has occurred and patches or releases are available. This document lists recent releases.

But by now, the exploit with the Telugu character is pretty much public knowledge.

Anyway, if you’re on iOS 11.2.5, go ahead and update to iOS 11.2.6 by going to Settings then General then Software Update and tapping Download and Install on your iPhone or iPad. It took me about 20 minutes to download and install it on my iPhone 6s.

Let us know if you’ve had any issues with recent iOS updates in the comments.