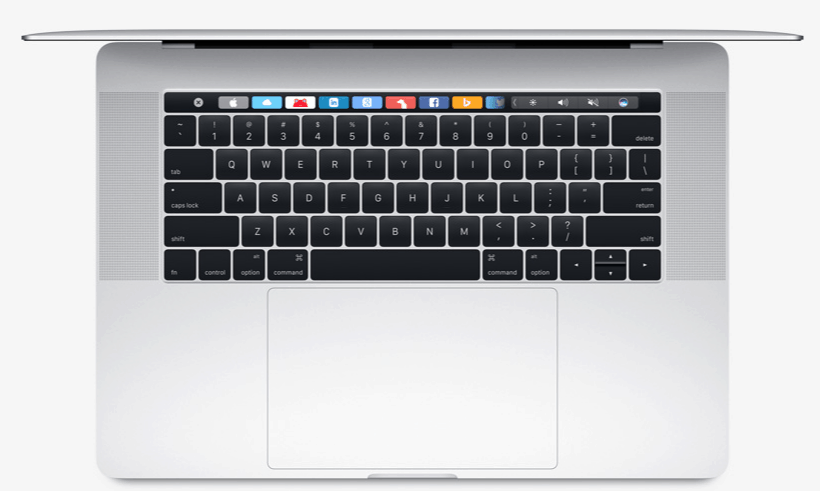 The much awaited announcement of the MacBook Pro redesign is here. Find out about the Touch Bar, Touch ID, new specs and form factor. Plus: some exciting Apple TV news to boot.

Apple finally revised its professional line of notebook computers, the MacBook Pro. The last major overhaul occurred in 2012 with the introduction of the Retina MacBook Pro, which removed the optical drive while soldering the battery and RAM modules to the motherboard. Since then, the design has pretty much stood still, with only internal updates each year. Last year’s 15-inch MacBook Pro only got the new haptic touchpad, but kept using the 4th generation Intel Haswell processors; even the 13-inch MacBook Pro got the then new Broadwell processor. The new 2016 MacBook Pro models embrace dramatic changes in familiar places, eschewing more ports in favor of standardizing on the Thunderbolt 3/USB-C port first introduced on the Retina MacBook. Apple is also retiring models in the product family such as the MacBook Air. Read on for more details about this year’s major update.

Today, Apple announced the new line of Macbook Pros. The big innovation: an OLED Touch Bar that replaces the row of function keys with an application dynamic set of soft keys. Plus, the MacBook Pros are thinner, lighter, and more powerful than ever before, as expected.

But of course, in order to build some suspense, the event devoted the first 15 minutes or so to other topics.

Before Apple CEO Tim Cook went into the main details of today’s event, he started off his presentation by focusing on accessibility. Apple launched a new website for users with accessibility needs, explaining how users can better utilize Apple devices while living with disabilities. Next, Tim recapped the launch of the company’s latest mobile device, the iPhone 7. He then gave some figures and status updates on how the phone’s been doing in the market. Not surprising, customer satisfaction is high. The company showed off some of the photos users are capturing with the new dual camera on the flagship, iPhone 7 Plus model. 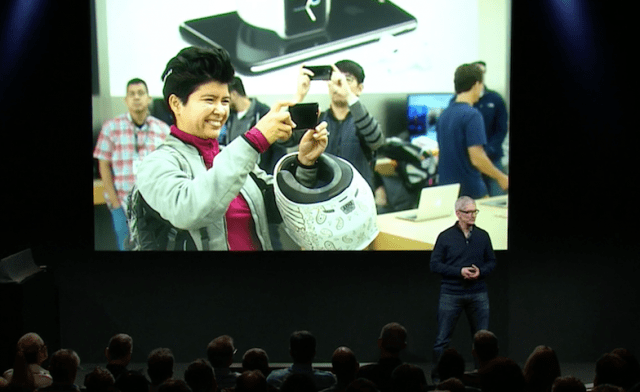 Over 60% of customers are already running iOS 10. In contrast, Google’s Android 7 has just scratched 1%. Already 400 million memories have been created using the new iOS 10 Memories feature. The recent launch of iOS 10.1 adds portrait mode with depth effect on the iPhone 7 Plus. Photos are much sharper with a blurred effect added to the background, giving the appearance of 3D. Apple Pay is now available in Japan. iPhone 7 also introduces contactless payment and support for local transit support across the region. Tim Cook also quoted some industry reviews of the latest Apple Watch Series 2 giving it great praise. The company’s Nike Watch release will become available today. 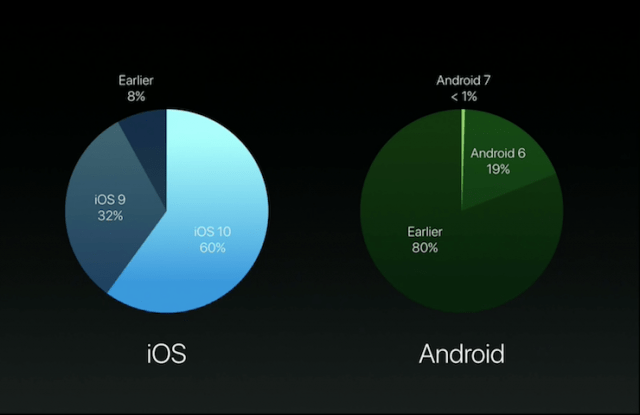 Over 8000 apps are now available including over 2000 games. Minecraft is also coming to the Apple TV later this year. 1600 video content creators are now available on the Apple TV. Apple demoed one of the new emerging apps showing up on the device. A new NFL app provides integration with Twitter; it includes video replay and the ability to start conversations. Twitter will also offer premium content from Bloomberg and Buzzfeed. 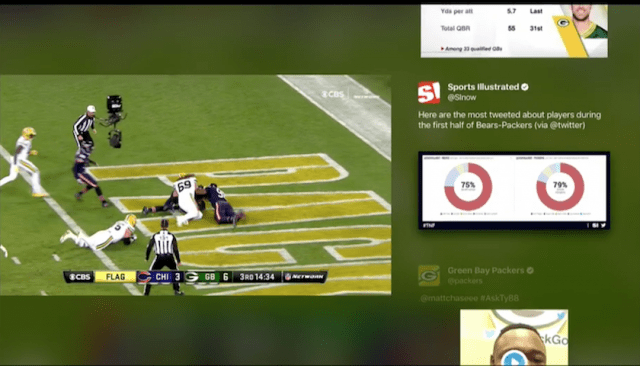 Described as one place to access all your TV shows and movies, the new app, simply called “TV” focuses on providing an engaging experience across Apple TV, iPhone, and iPad. Apple showed users how they can keep collections of TV shows and movies across all Apple devices. A feature called “Up Next” keeps you updated on new series or related content you might like. You can immediately jump into a series for the first time and start watching,  then have it automatically added to your collection. Users can easily download apps from different content providers too, such as Starz or HBO on one device then have it automatically appear on other Apple devices. 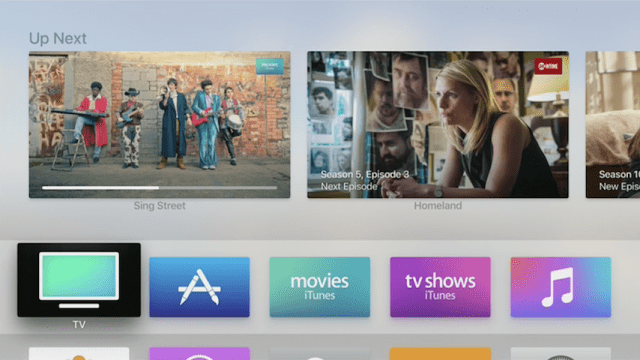 Siri can let you call up live content such as news and search for shows,  sports events, or other entertainment from within the app. TV will be a free update available in December. 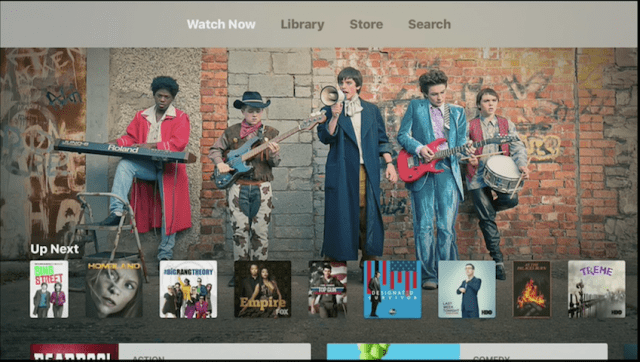 Before discussing the new MacBook Pros, Tim recapped the latest release of MacOS, Sierra, with features such as iCloud Desktop and Siri integration. The Apple CEO reminded attendees that this week marked the 25th anniversary of the first Apple notebook. He noted Apple’s early and recent innovations such as trackpad, wireless, uni-body design, ultrabook design and retina display. To build further suspense, Apple showed a video going through the evolution of Apple notebooks over the years. 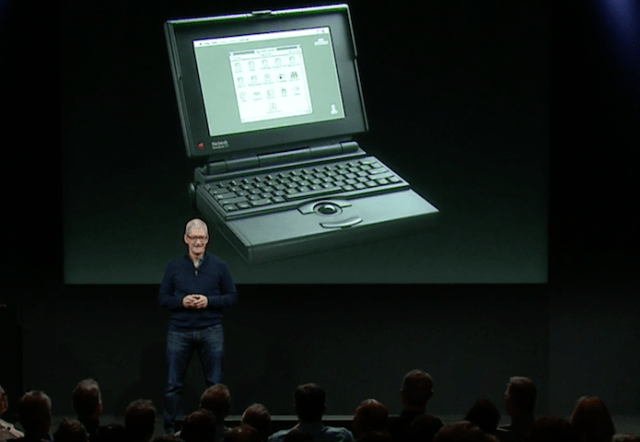 Senior VP of Marketing Phil Schiller then came on stage to describe in detail the new innovations offered in the 2016 MacBook Pro. The first noticeable change is the addition of a new black color, which aligns with the company’s recently launched iPhone 7. 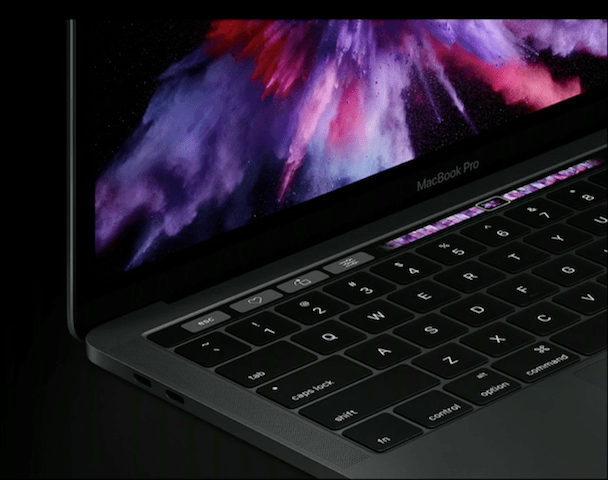 The Retina display also gets a major boost: 67% brighter, higher contrast ratio and 25% more colors. Updated components include an Intel Core i7 quad-core processor at 2.1 GHz—this is Skylake by the way. Kabylake processors with the appropriate thermal envelope are not ready yet. 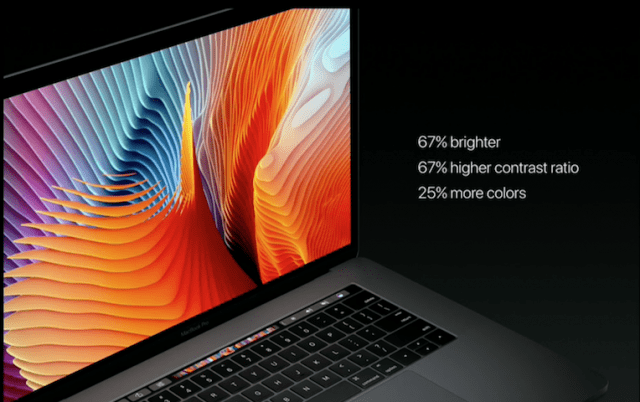 An AMD Radeon Pro featuring a 14 nm GPU, based on the Polaris architecture is also included with up to 4 GBs of video RAM. Apple says the new GPU is up to 2.3 times faster. Apple as always likes to include faster flash chips with major updates—the 2016 MacBook Pro is no exception. A super-fast SSD with an I/O rate of 3.1 GBs per sec is included, which Apple says is 50% faster. An option for a 2 TB SSD configuration is now available, but that alone will set you back $1,300. The new Intel Iris graphics includes 64 MBs of eDRAM, which Apple says is 2x faster than the previous generation. 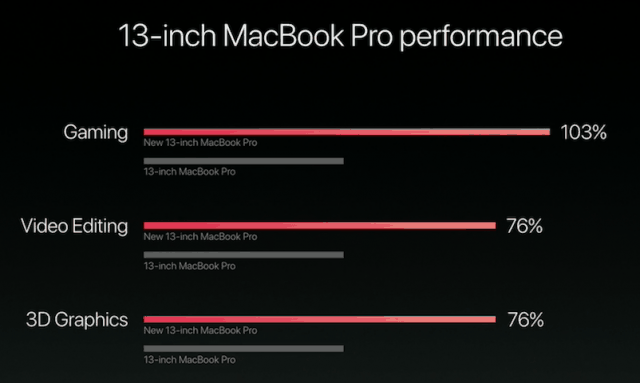 Featuring a second-generation butterfly keyboard, Apple says the new keyboard on the MacBook Pro offers more feedback and longer keyboard travel, but I would recommend users try it out before purchasing one. I gave last year’s Retina MacBook a spin at the Apple store and was disturbed by how shallow the keys were. I could touch type without issue, but it just felt weird; like I was typing on a calculator or stuck keys. 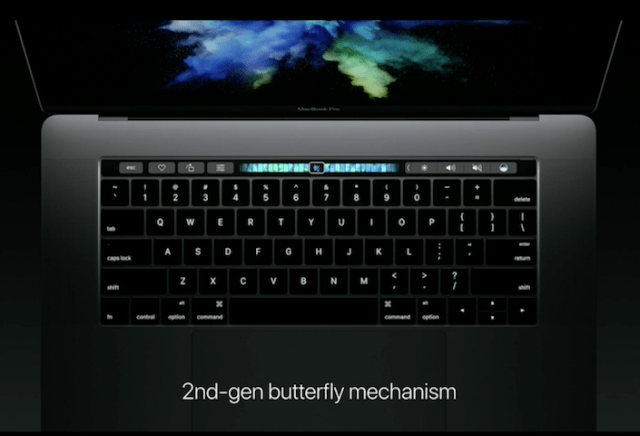 The overall design of the new MacBook Pro is a major part of the revision. The 2016 MacBook Pros are 13 percent thinner and comes in black and silver. Users hoping for gold or rose pink, will have to settle for the smaller Retina MacBook’s. Apple disappointed users who were expecting a 17-inch model, instead, sticking with the traditional 13- and 15-inch designs. The MacBook Pro eschews many legacy ports in favor of four Thunderbolt 3/USB-C ports. This means you will likely need to invest in dongles for technologies you still use like HDMI, SD Card Readers and USB A. Interestingly, the audio jack survived, but iPhone 7 users will need a dongle to sync or use wireless syncing in iTunes. The new MacBook Pros are USB C compatible, featuring up to 10 GBs per second transfer rate and compatibility with the TB 3 standard. Any one of the TB3 ports can be used to charge the device.

For professional content creators, the new MacBook Pro’s will mean investing in new hardware, specifically display monitors. The company collaborated with LG to design a new 5K display just for the new MacBook Pros with Thunderbolt 3 support. Users needing this extensibility must prepare to fork out $1,300 for the privilege. 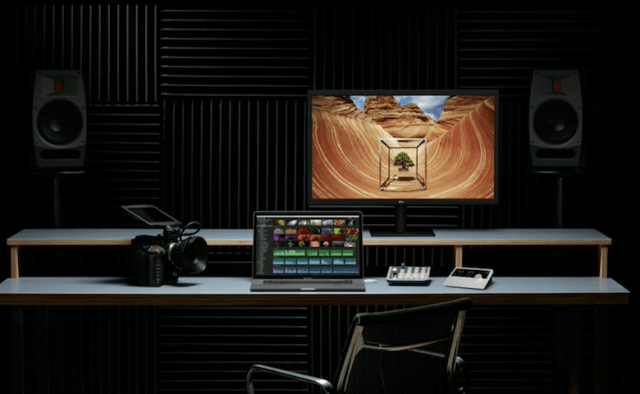 The highlight of the new MacBook Pro is the Touch Bar. An application dynamic touch sensitive toolbar that lets you easily access frequently used commands within applications. Apple demoed a selection of consumer and professional apps with built in support. Phil Schiller showed switching between tabs in Safari, adjusting photos and editing a document in pages. 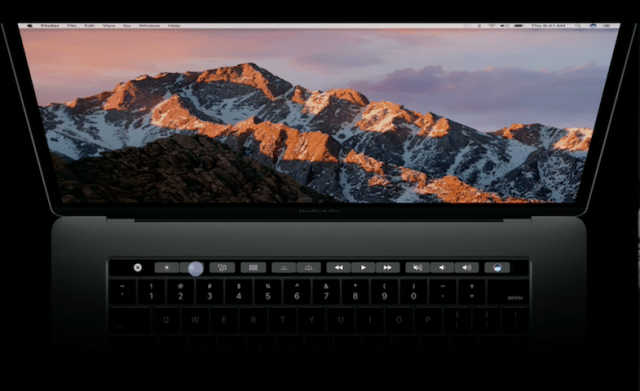 The Touch Bar does include one physical button at the extreme end for Touch ID and powering on the system. First introduced on the iPhone, Touch ID on the new MacBook Pro lets you authenticate and make purchases in Safari. If you share a MacBook Pro with someone, you can easily use it to switch between accounts; I thought that was very cool. The Touch ID sensor features a second-generation sapphire crystal and a new Apple T1 chip, which stores the secure enclave for your fingerprint. 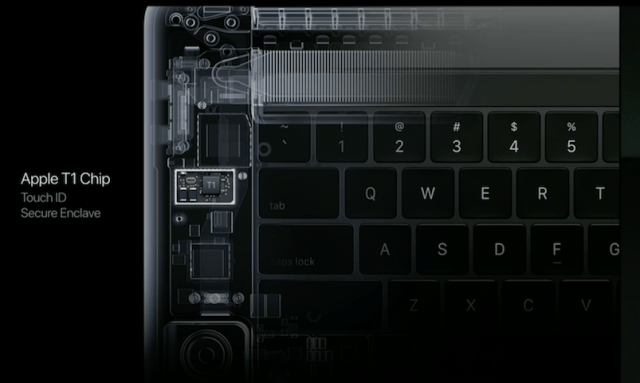 Apple’s VP of software, Craig Federighi, brought his usual breaking the ice routine, demoing how Touch Bar works across apps. Again, Apple showed off many of the built-in apps such as Mail, Messages, Safari and Maps with Touch Bar support. The Touch Bar still provides access to commands such as ESC and function keys used by developers in utilities such as Terminal or VIM. Touch Bar also includes support for macOS developer tools, XCODE and third-party developers will be able to integrate support in their applications. With Touch Bar, users can easily swipe through a photo library, respond to a message with predictive text, add emoji’s or edit the timeline in a professional app such as Final Cut X. Apple brought third party developers on stage to demo a couple of apps, such as Photoshop CC. 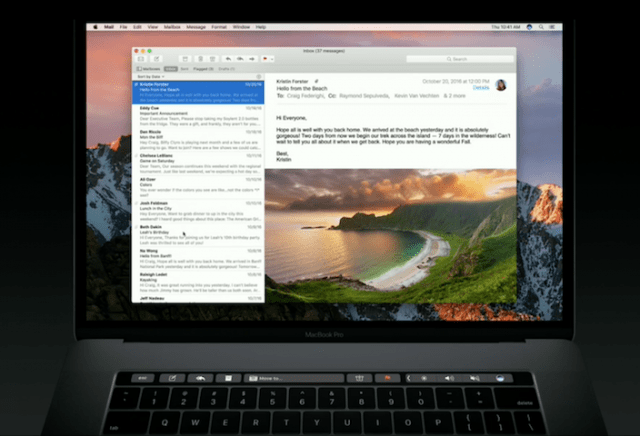 Pricing for the MacBook Pro’s start at $1499, the entry-level 13-inch machine, available to ship starting today, features a 2.0GHz Core i5 processor, 8GB of 1866MHz RAM, a 256GB SSD, Intel Iris Graphics 540, and two Thunderbolt 3 ports. This model lacks the new Touch Bar and Touch ID, which some users might be happy with.

If you still want the older generation models, you can still get them for the same price while stocks last.

As usual, the Apple Event was hyped as a major development. I won’t pass judgment until I get a chance to get my hands on one of the new MacBook Pros. But in comparison to yesterday’s stunning display of innovation from Microsoft, truly, it shows both taking divergent paths in regards to the future of the PC. Apple remains loyal to much of what makes a notebook a notebook today. Somehow, I feel it’s sort of a dead end and the Surface Book is truly where users want to go. The Surface Studio further defines and clarifies a future for creatives that’s more engaging with their content. Apple exemplified that with the iPad. The iPad Pro pushed Apple for the first time to copy a competitor. It just seems inevitable for Apple to start copying those machines for what users really want, which is a device that’s touch-enabled in an innovative and intuitive way.