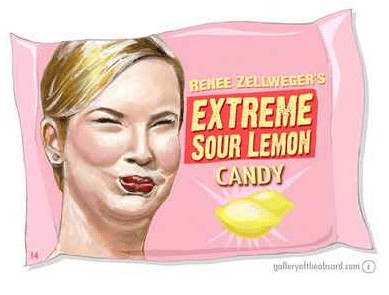 Health officials today issued a warning that millions of computer users are at risk to develop Renee Zellweger Syndrome. Victims of the malady typically can be identified by their constant squinting.

“We believe the eyelids of computer users with RZS are being frozen into permanent squints because of their constant strain to see the cursor arrow on computer screens,  said a department spokesman.

Not surprisingly, the disorder is more prevalent among laptop users.

Officials said they knew of no effective treatments for RZS.

Maybe they don’t. But we do. And the fix is easy.

If you have trouble  seeing your cursor, get a cursor you can’t avoid seeing–an animated cursor. In addition to being packed with movement and color, animated pointers often are bigger, all of which makes them easy to spot instantly. Check out this comparison of a normal Windows arrow and animated arrow:

Which one did you notice first?

Thought so. Even without its animation at work, the wildly colored pointer on the right grabs your attention.

There are several sites where you may download animated cursors, but many of them use free cursors as a lure so they can offer junk programs or plant irritating cookies. For safe and aesthetically pleasing animations, the best place to go is Anicursor , a site run by German artist and engineer Dierk Lürbke.  His site has a groovy collection of 13,000 animated cursors brought back alive and kicking literally from all parts of the world.  But the best cursors there are those Lürbke has designed himself.  Mostly rendered as abstract expressionism and cubist creations, his cursors really should be blown up about 400 times and given an exhibit at MOMA.

Here are some examples of Lürbke’s animated cursors.  If you see one or more you like, you can download them or the 12 thousand-and-something others at his site. As you can see, they’re not all arrows. You can find

replacements for hourglasses, arrows that tell you when you’re hovering over a link, and the double-headed arrows associated with moving the sides of boxes.  And if abstract art is not your thing, you ll also find animated cursors that run the range from tropical birds to flipping the bird.

Once you put together a set of animated cursors you like, replacing the standard Windows pointers is a cinch if you follow our directions at How to Replace Windows’ Dull, Drab Cursors.

But with any of them, chances are you can cancel that appointment with the eyelid surgeon.