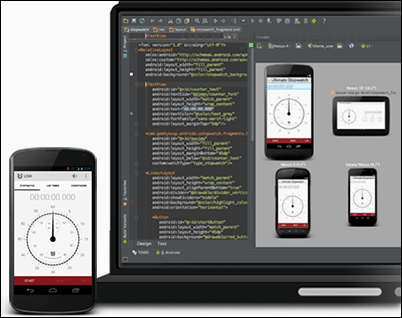 The Android SDK is getting a heavy face lift. Upon release of the new version, development for the Android platform will be easier than ever.

Google recently released an early access preview to Android Studio, the next iteration of the Android SDK. A lot of changes are still being put in, and while the project is being finished users are encouraged to continue using the current version for the time being, but be prepared to migrate soon. What’s new so far? Good question!

The best piece of news is that Eclipse is being left in the dust and the entire development environment is being moved over to IntelliJ. This alone is something that will likely draw interest from more developers and improve the entire production process for Android. As a novice developer myself, I can tell you that Eclipse is awful in comparison and this is very, very welcome change. Other changes included in the update include Google Analytics powered referral tracking, app translation, multiple layout tools, real-time code simulator, five new features for the developer console, and plenty of more features that haven’t been highlighted yet.

Now is a truly an exciting time for development on Android, and if you’re someone that has been contemplating on doing it – the new Android Studio is a great opportunity to learn the platform.