New York: Amazon today announced its long awaited tablet and three new Kindle devices. As expected, Amazon led the charge with its down and dirty pricing — these devices are priced to sell quickly and obviously targeted at holiday shoppers.

The Kindle Fire tablet costs just $199 — far less than the $499 iPad from Apple — and it is a dual-core, color tablet with a  7-inch display. It’s available for pre-order now at Amazon, and will ship Nov. 15, Bezos said.

Priced as a loss leader at $199, Amazon will likely recoup the losses via sales and rentals of books, video and music downloads and streaming, which Bezos said the tablet will support via its WhisperSync technology. The Fire is lighter, too. See specs below.

Amazon execs say they will make more than 100,000 movies and TV shows via Amazon Instant Video available for streaming, purchase, download or rent. KindleFire comes along with a month-long free subscription to Amazon’s Prime service, normally about $79 a year. Existing prime members can expect generous deals, too.

Analysts told groovyPost reporters they expect Amazon to sell millions of devices if Amazon could arrive under $300 price point. So the race is on. Now the tablet wars — which was a one man game of Solitaire until now — will begin in earnest.

The Kindle Fire as yet does not work with 3G technology or include a camera or mic, but groovyPost expects Amazon’s larger tablet due Q1 to remedy that.

Here are the specs as reported by Amazon. We’ll be following this breaking story and providing analysis via groovyCast podcasting later today and here on groovyPost. Our news analysis team will bring you perspective in coming hours and days. 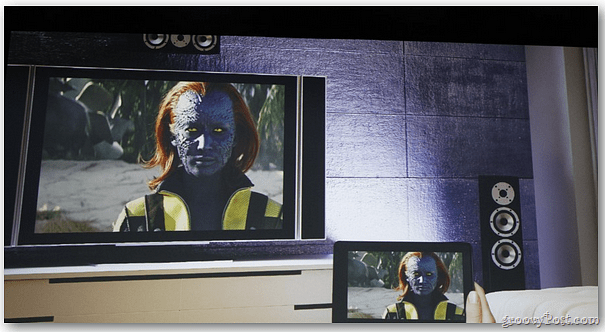 We know you can’t wait, so here are the specs Amazon has announced. The dual-core processor powering the Amazon Kindle Fire is notably missing from the spreadsheet. Our sources have told us NVidia Tegra2 was going to be at its heart, but Amazon says it has now opted for the 1GHz dual-core Texas Instruments OMAP processor. Watch our coverage of this breaking story. Are you going to buy one? Let us know.

No System Requirements: The Kindle Fire Tablet requires no computer.

Storage: Free cloud storage for any and all Amazon content, 8GB internal. The latter can fit about 10 movies or 800 songs or 6,000 books, execs say.

A one-year limited warranty is available.

Check out this video from TheWorldNewz of an Amazon rep showing the Kindle Fire close up.