Amazon announced this week that you can nab yourself a year-long Amazon Prime subscription this Friday, September 25th for only US$67 which normally costs $99/year.

Amazon Prime Membership Only $67 this Friday

Amazon has announced that Amazon Prime memberships will be just $67 this Friday, September 25th starting at 12 AM EST and will end at 11:59 PM EST. This special is to celebrate five Emmy wins for the Amazon original series Transparent at this year’s Emmy Awards on Sunday. 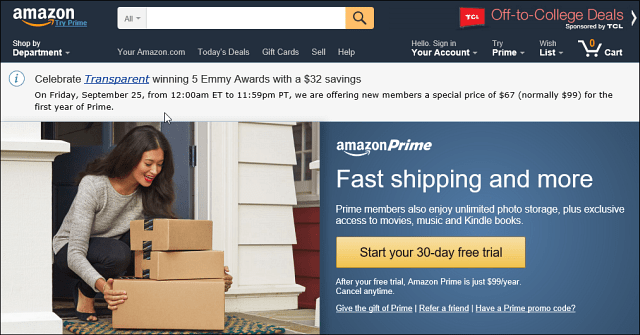 Amazon has announced that Amazon Prime memberships will be just $67 this Friday, September 25th starting at 12 AM EST and will end at 11:59 PM EST.

According to Michael Paull, Vice President of Digital Video for Amazon:

“This has been an incredibly exciting year—with the Golden Globes wins in January and now twelve nominations and five Primetime Emmy wins. We are thrilled to celebrate Transparent with our customers by offering a Prime discount”

Amazon Prime offers a ton of benefits which include free 2-day shipping, unlimited movies and TV shows (including originals like Hand of God and Transparent) via Amazon Video, unlimited music streaming via Prime Music, unlimited photo storage, over 800,000 free eBooks via the Kindle Owner’s Lending Library, and much more.

Note: This offer is available only for new subscribers. Also, the old, cancel and get it cheaper trick doesn’t work either. If you cancel your subscription and are outside your renewal window, you will end up paying twice.

If you’re not an Amazon Prime subscriber yet, make sure to mark your calendar for this Friday to get a year of Prime on the cheap via the link below.