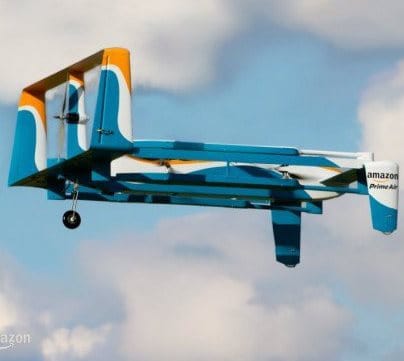 Amazon this week announced Prime Air will be an unmanned air vehicle requiring that packages be delivered within a ten-mile radius. Here’s a closer look.

The future is now, online merchant conglomerate Amazon revealed its new Amazon Prime Air, a future service that will deliver packages under 5 pounds in 30 minutes or less using small drones. Speculation about Prime Air has been ongoing for some time now. In late 2013, Amazon CEO Jeff Bezos revealed his plans in a 60 minutes interview. The Prime Air will be an unmanned air vehicle requiring that packages be delivered within a ten-mile radius. 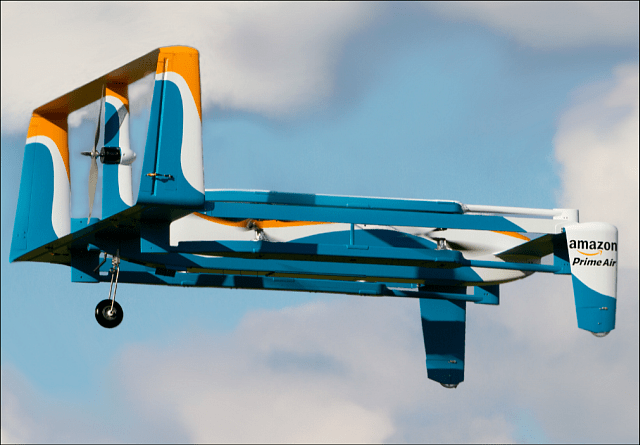 The drone that weighs around 55 pounds will fly under 400 feet utilizing specialized sense and avoid technologies when delivering packages safely to customers. Of course, the idea of having autonomous vehicles flying over your house might be a concern; the company has assured the public that layers of redundancy come built in ensuring safety. Amazon still has not achieved regulatory approval for the Prime Air, but the intention is to make it a global option. This is not impossible since the company maintains multiple distribution centers for its products and services. The company is already testing out prototypes throughout the US, UK, and Israel.

A final design has not been settled on, but you can see a preview of just one of many prototypes the company is working on soon. The company was awarded a patent in early 2015 for Drone Delivery Systems. It’s also worth noting that, Jeff Bezos is interested in sending us (and perhaps deliveries) to space. His rocket venture, Blue Origin, recently had a successful rocket launch and landing.

Amazon has been on a whirlwind of innovations and technologies. The company started as an online bookstore in 1994 then grew into the world’s most successful online merchant, selling not only books, but groceries, electronics, and music, too. The company has entered new markets over the last decade, with its most recent successes being the Amazon Web Service, which competes with Microsoft Azure and Google Cloud letting companies purchase computing power as any other utility.

The Amazon Kindle tablets have become popular with consumers, and the company is always innovating. Earlier this year it introduced a unique device called the Amazon Echo smart speaker that could end up being a central hub for home automation. With new services such as Amazon Prime, the company continues to please consumers by being giving them what they want, when they want it.

Amazon has experienced a few misses over the years, though. Most recently, due to its late entry into the smartphone market, the Fire Phone never resonated with consumers and were considered a complicated and expensive dud.

That has not stopped the company from searching for new opportunities for growth, with the Amazon Prime Air becoming a reality soon, the company might be delivering a futuristic hit to your doorstep soon. Now has never been a better time to go and buy an Amazon Prime Subscription.