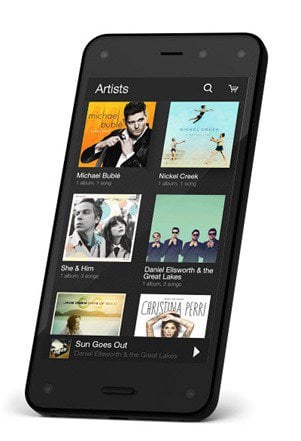 Amazon got into the smartphone business today by unveiling its first device called Fire Phone. Here’s a preview of the phone and what you expect.

Amazon unveiled its latest Fire brand of devices this week, its first foray into the smartphone market with the company is calling Fire Phone.  There’s several interesting features and services that were announced today. Here’s a closer look at what was announced by Amazon founder and CEO Jeff Bezos at the unveiling today. 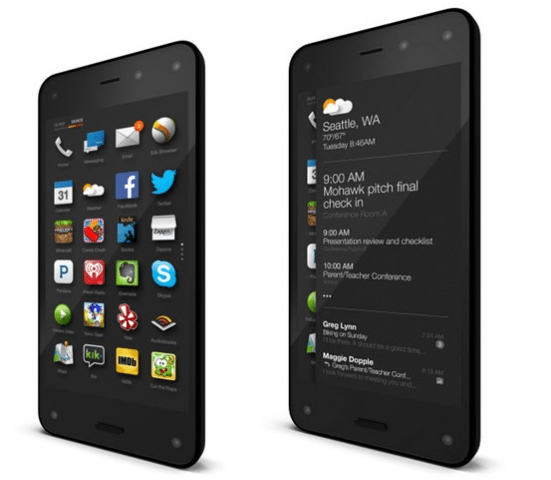 Just like its line of Kindle Fire tablets, the phone will run a heavily customized and forked version of Android which the company is calling Fire OS 3.5.

The Fire Phone’s body is made of aluminum with anodized button. The screen is a 4.7-inch IPS LSCD HD display at 720p and 315 ppi. Under the hood is a 2.2GHz Quad-core Snapdragon 800 CPU,  2GB of RAM  and the graphics are powered by an Adreno 330 Graphics Processor.

You can get a phone with either 32 or 64GB of storage space.

The rear-camera is 13MP with f/2.o five elements lens, Image Stabilization, as well as a dedicated camera button, which allows you to take a picture even if the screen is off. It will take 1080p video at 30 fps from both the front and rear-facing cameras. It can take shot with Panorama, Lenticular, and Burst capture.

The battery life claim is impressive. Amazon touts battery life of 285 hours of standby time, up to 22 hours of talk time, 65 hours of audio playback, and up to 11 hours of video playback. Hopefully this amount of battery life holds true in the real world as the phone starts shipping on July 25th. 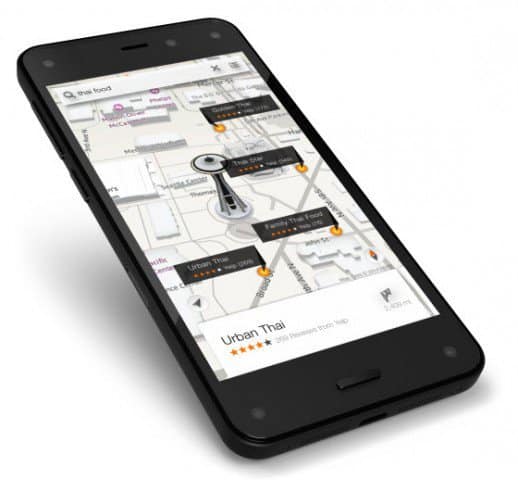 The front of the phone has four small cameras that are used for what the company calls Dynamic Perspective. Unlike the rumors of a proper 3D phone, this is a different technology that allows you to tilt the phone to browse through photos, books, etc. It contains a designed sensor system that responds to how you hold, view, and move the phone. The Dynamic Perspective sensor system includes invisible infrared illumination, gyroscope, accelerometer, magnetometer, barometer, proximity sensor, and an ambient light sensor.

It’s actually not fair to put this feature in words. I recommend watching the demo in the video below. The Dynamic Perspective segment starts at the 40 minute mark. To get right to it, click this link.

For sound, it has Dual Stereo Speakers with Virtual Surround Sound. It also comes with a pair of tangle-free earbuds.

Firefly is a new feature that recognizes everything around you. You can use it to identify music (like Shazam or Cortana on Windows Phone), scan QR codes, Barcodes, signs, and more. Jeff Bezos demonstrated it by pointing the camera at a can of Nutella, and it was identified and provided a link to Amazon to buy the product. This is an interesting feature and might not make brick and mortar stores happy. You can go to a Best Buy for example, take a shot of a device, and instantly see if it’s cheaper on Amazon. It also has smart OCR to scan real-world items like signs, business cards, phone numbers and more. 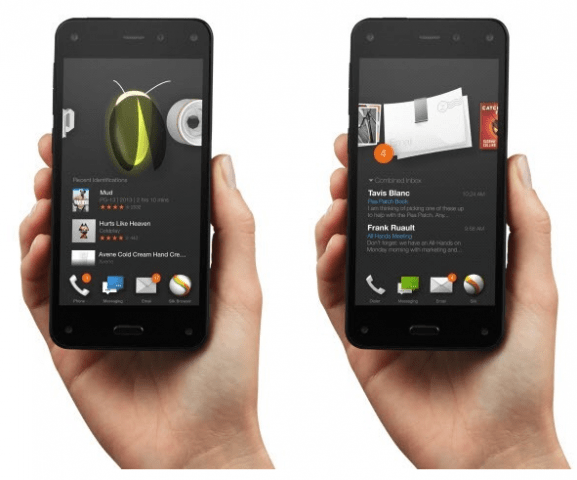 This Fire Phone, as well as all Kindle and Fire devices, provides a portal into the Amazon store, as well as the abundant amount of services for Prime members. Plus Amazon’s own app store which, at the time of this writing, includes over 240,000 apps and games.

It’s also worth noting that the Fire Phone and Fire TV are said to integrate well with each other, similar to the Fire HDX and Fire TV, and the phone will act as a remote for the set-top box.

If you are a Kindle Fire HD or HDX owner, the heavily customized forked version of Android will be familiar to you. It even includes the patented “Mayday Button” for fast customer support. 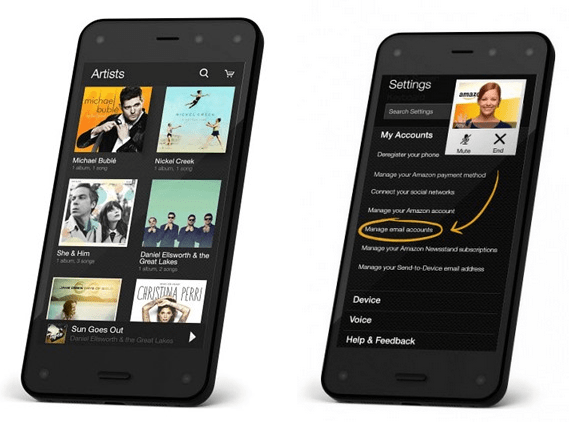 Amazon is getting closer to providing a complete ecosystem for its customers. It’s just missing a PC with its own operating system. It has its line of Kindle Readers, Fire HDX tablets, Fire TV, an eBook library, video and music streaming services, an app store, and now the Fire Phone.

One glaring caveat is that the phone will be exclusive to AT&T’s Next contract which will undoubtedly turn off several potential customers. The 32GB Fire Phone costs $199 with a 2-year contract or $649 without a service plan. The 64GB model is $299 with AT&T contract or $749 without.

A lot of people were hoping that the phone would have an off-contract pre-paid style plan, or some type of subsidized plan, and not the typical carrier contract 2-year contract. If Amazon decided to do that, it would really set it apart from the rest. Windows and Nokia are doing it with the Lumia 520 which is also on AT&T, but off-contract, pay as you go model, and you can purchase it for under $100.

As extra incentives, when you purchase the phone you’ll get a full year of Amazon Prime for free. A Prime membership is is $99/year, and if you are already a Prime member, your current subscription will be extended for a full 12 months free of charge. So if you take that into account, you can consider the 32GB model  is just $99 with contract.

The Fire Phone is available for pre-order today and is set to ship on July 25th.

If you would like to watch the entire Fire Phone presentation by Jeff Bezos, check out the video below:

What is your opinion of the news about the Fire Phone from Amazon? Leave a comment below and share your opinion.