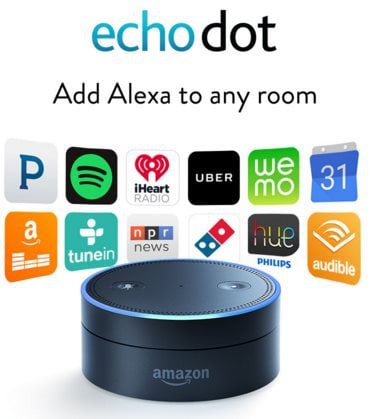 The Echo Dot is a hockey puck style version of its big brother the original Amazon Echo. The Echo Dot has removed the music-playing speakers, added an audio port, and the ability to connect to Bluetooth speakers. This satisfies one of the main requests from current Echo owners. 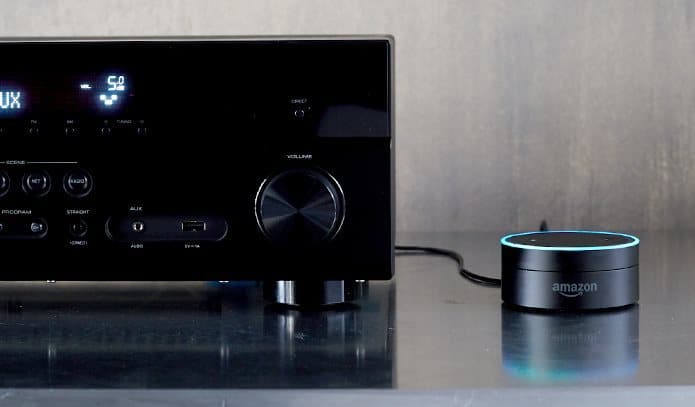 The Dot has all of the same features of the original. It has the seven microphone array, volume ring, and mute and action buttons. It also works with third-party services like Pandora, Spotify, iHeartRadio, and Prime Music. It also can control your smart home devices like the Nest thermostat, Phillips Hue lighting, and more.

It’s also worth noting that there is a built-in speaker in the Dot that provides voice feedback and alarm functions. And, just like the original, it’s able to learn new skills.

The Dot is available exclusively to Prime members and costs $89.99. According to Amazon:

Echo Dot is available in limited quantities and exclusively for Prime members through Alexa Voice Shopping. To order your Echo Dot, use your Amazon Echo or Amazon Fire TV and just ask: “Alexa, order an Echo Dot.”

The Amazon Tap also has all of the features of its big brother (including built-in speakers), but this one is smaller and more portable. It provides up to nine hours of playback and comes with a Charging Cradle. It’s a Wi-Fi and Bluetooth speaker, but you need to press the mic button on it to initiate speech recognition.

It also comes with optional slings that make it easier to carry around that come in six different colors. The Amazon Tap is available now for pre-order and will be released on March 31st of this year. It is also exclusive to Prime members who currently have an Alexa powered device – either the original Amazon Echo or Fire TV and costs $129.99.

The Amazon Tap is available now for pre-order and will be released on March 31st of this year. Currently. There is no word on when either of these will be available for everyone to purchase.

For more tips and tricks, make sure to check out our Amazon Echo article archive.

The following video from Amazon gives you an idea of use cases for using the Echo Dot.