This week the popular Android media streaming app, AllCast, has landed for iOS 8. It lets you stream content from iOS to several set-top boxes and more.

This week the popular media streaming app AllCast was released for iOS. It was previously only available on Android, and we wrote up an article that shows you the power it has to connect to virtually any set-top box or compatible TV out there.

The benefit of AllCast is that you don’t need to be tied to one ecosystem to stream your media to the big screen. And now that it’s available on iOS, you can break Apple’s AirPlay shackles and use devices other than an Apple TV to stream digital content to where you want.

AllCast for iPhone and iPad

Download AllCast to your iPhone or iPad running iOS 8 or later (yes, iOS 8 is required), and you’re ready to start streaming your media. Not just videos, photos, and music stored locally on your iPhone or iPad, but from network and cloud locations to your TV through virtually any type of set-top device you want.

First, make sure you’re connected to your Wi-Fi network, launch the app, and tap the broadcast icon. It will find any compatible devices on your network. Select the one you want to stream to. 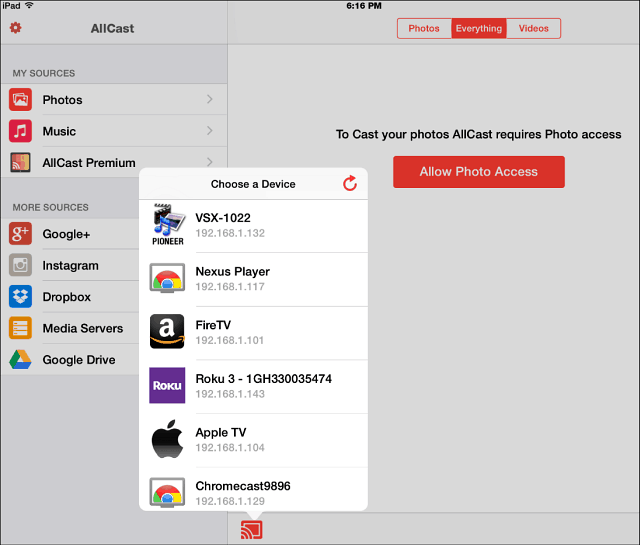 It also lets you stream content from any media server you might have set up on your network. For instance, in the example below, it found my Windows Home Server and the USB drive connected to my router.

What’s even better is that you can link the app to your Instagram, Dropbox, and other cloud services to stream content to the TV. 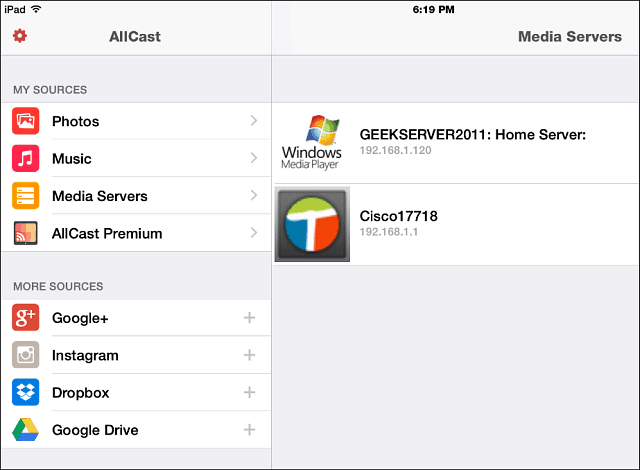 Just like on Android, the app is free. But for the most features, you’ll need to pay $4.99 to unlock all of its features, including the removal of ads and splash screens and no limits on video lengths.

If you’re an Android device user, make sure to read our article about using AllCast on Android.