Tonight I saw 16 lights in the sky, dancing in perfect choreography, beaming lights at the earth below, and serenading everyone in earshot with eerie but joyous music. No, I wasn’t drunk or stoned.

Tonight I saw 16 lights in the sky, dancing in perfect choreography, beaming lights at the earth below, and serenading everyone in earshot with eerie but joyous music. No, I wasn’t drunk or stoned. And the lights were not flying saucers. But they were something just as amazing – flying robots.

Each about the size of your hand, the robots are called quadrotor robots by the team at the University of Pennsylvania that built them as part of the General Robotics, Automation, Sensing and Perception (GRASP) program. The autonomous robots dazzled the audience at the Cannes Lions International Festival of Creativity in France recently. 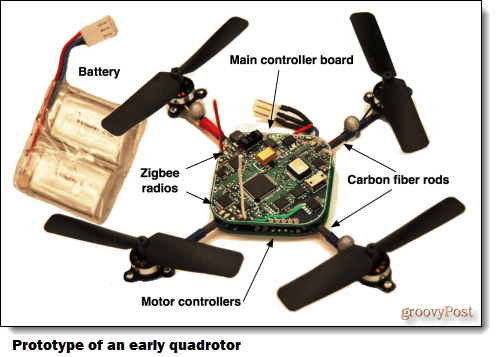 And you, too, can be dazzled by playing the video below. Be patient. It starts off slow, but quickly breaks into as delightful a light show as you’ll find this side of a Pink Floyd concert. And it’s all the more dazzling when you realize that the robots are manipulated by humans only at the highest command levels to give the quadrotors general guidelines. From there, the robots are on their own, working from artificial intelligence inspired by the biology of insect swarm behavior.

Each of the robots weights between 50gm and 5kg and changes motion by varying the speeds of the four rotors attached to each robot to lift them into the air. Their movements are determined by onboard processors getting data from gyroscopes and onboard sensors that tell each robot what its flying companions are doing. The processors send commands 600 times a second to change the speeds of the rotors as needed to perform the robots’ aerial ballets. The beams of light that shoot out like legs and arms or the Martian vehicles in “War of the Worlds,” are controlled by mirrors on each robot.

If you’d like to learn more about the robots, read the PDF paper written by electrical engineer Alex Kushleyev, mechanical engineer Daniel Mellinger, and Vijay Kumar, a professor at Penn’s School of Engineering and Applied Science. Or check out the videoed TED talk by Kumar. Or, if all you’re looking for is pure dazzlement, just play the video below.