New file formats for images don’t get developed that often. However, one has been defined and finalized during this decade. High-Efficiency Image File Format (HEIF), also known as High-Efficiency Image Coding (HEIC), is slowly becoming the standard file format for photographers for both individual images and image sequences. Today, some of the largest technology companies in the world have embraced HEIF, including Apple.

Developed by the Moving Picture Experts Group (MPEG) in 2013, the HEIF criteria was finalized in 2015. It stores twice as much information as JPEG images of the same size, thereby improving the quality of files significantly. Because of this, you can feasibly store twice the number of files than before. Additionally, the resulting images should upload faster to online services because of the smaller size. On the iPhone, for example, this means pictures uploaded to the iCloud Photo Library should move twice as fast.

Further, HEIF also supports animation and can store more data than an animated GIF at a fraction of the size. HEIF is based on the High-Efficiency Video Compression (HEVC) or H.265 video format.

For nearly a quarter-century, JPEG has been the standard for online photography. With both image and video quality improving each year, JPEG files have grown in size considerably, which has been bad news for mobile device owners with limited storage space. Enter HEIF, which uses compression techniques that MPEG claims will store 50 percent more information than a similarly sized JPEG with no loss of visual quality.

Beyond this, where JPEG can only capture color in 8-bit, HEIF increases this to 16-bit. Equally significant: HEIF can carry single images and sequences of them acting as a container. The format can hold multiple images, audio, image thumbnails, depth-of-field information, and much more. JPEG, by contrast, can only carry data for one photo.

Apple’s Use of HEIF

In 2017, the iPhone maker made the switch from JPEG to HEIF on both iOS and macOS computers. Apple iPads also use HEIF in iPadOS. Images taken on either device now contain the HEIF or HEIC file extension. In turn, this can contain various files like the types mentioned above. Apple’s Live Photos, for example, are ideally suited for the new format since they can easily contain multiple photos and a recorded sound file.

Until HEIF gets fully implemented elsewhere, these devices transcode images automatically into JPEG when sharing with non-Apple devices. This is important because HEIF compatibility continues to lag. Microsoft, for example, only added compatibility for HEIC recently and it requires the installation of an extension. To date, no web browsers support HEIF, including Google Chrome, Mozilla Firefox, Microsoft Edge, and even Apple’s Safari. Android Pie and later does support HEIF, however.

If you own an Apple device, you can also turn off HEIF. To do so:

When selecting Most Compatible, Live Photos get stored as JPEG still image files and a three-second MOV video file. 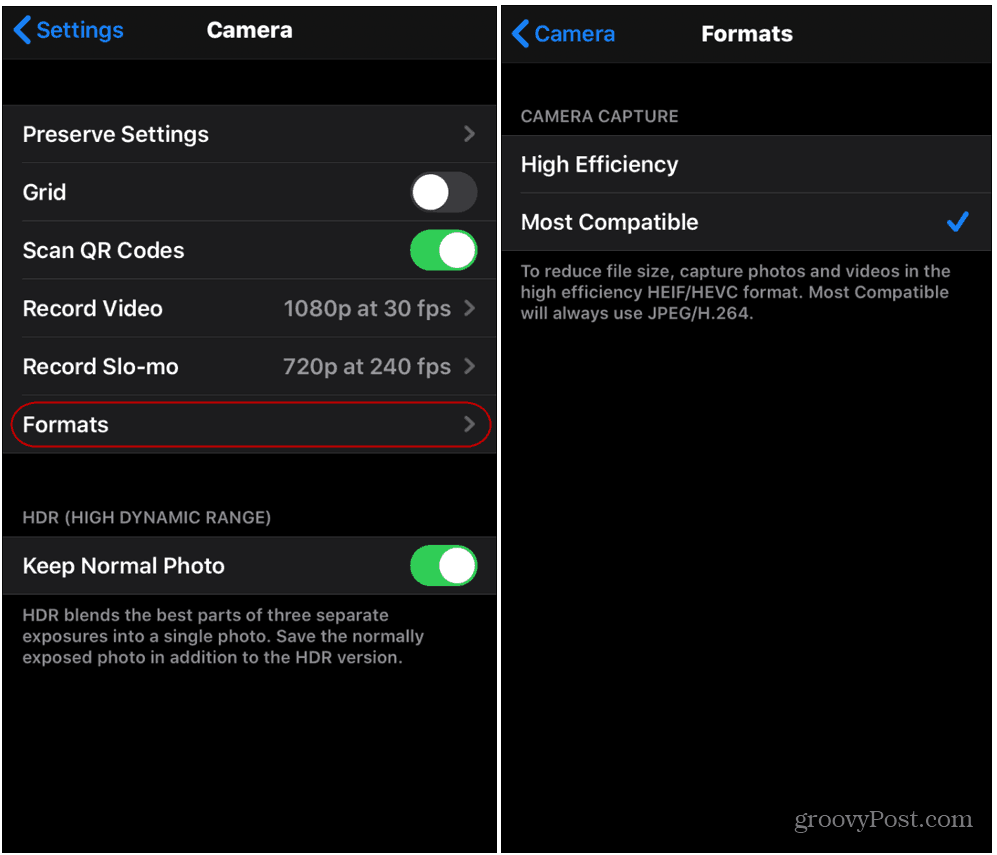 If you’re a Mac user and feel the need to convert HEIF to JPEG, there are a few (but certainly not many) highly-rated tools available in the Mac App Store. These include:

What about JPEG to HEIF?

If you want to take the time and convert existing images from JPEG to HEIF, you can do so also. Your best bet is to open individual files in the Preview app on Mac and save as a HEIC file.

It will be interesting to see how quickly companies move from JPEG to HEIF as their standard image format. With Apple taking the lead, it probably won’t be long until other companies follow. The change won’t mean the end of JPEG or any other format, however. Though they eventually ebb in popularity, image file formats never die, but rather just fall into obscurity.