Fleeceware is the term to describe apps that charge an excessive monthly fee after a brief free trial period. Find out how to avoid getting “fleeced”.

Fleeceware is a growing problem for mobile device owners, even though many probably haven’t heard of it. When you’re “fleeced,” unfortunately, it could cost you big bucks, as you can see below.

First coined by British security researchers, fleeceware is the term to describe apps that charge an excessive monthly fee after a brief free trial period. The issue has grown considerably in recent years as Apple and Google have allowed developers to offer free trials in the App Store and Google Play, respectively.

In April 2020, security firm Sophos Labs said 3.5 million people had downloaded an app it considers fleeceware. The apps come in various forms and typically fall into multiple categories, including image and face filter apps, fortune-telling, and barcode scanners. In all cases, the fleeceware promises bonus, extra, or premium features that aren’t available on a free app version.

How bad are some of these apps? As Sophos Labs explains:

Many of these apps charge subscription rates like $30 per month or $9 per week after a 3- or 7-day trial period. If someone kept paying that subscription for a year, it would cost $360 or $468, respectively. For an app.

In total, Sophos Lab identified 30 apps as fleeceware, which Apple quickly pulled from the Apple Store. Unfortunately, like a game of wack-a-mole, new titles are almost certainly popping up each day.

Before and after you download an app on your device, there are things you can do to protect yourself. These tips aren’t just useful to identify fleeceware; when followed, they will also help you save money on unnecessary purchases.

Because of how it markets some free trials, it’s a little confusing to find the terms of an app’s free trial period.

On the App Store, apps with free trials are identified with either a Free Trial button on the store’s front page or a Get button that mentions in-app purchases. The former is much easier to use than the latter.

You’ll find the subscription offer immediately when you tap on a Free Trial button. It’s only after you tap Install & Subscribe that you’ve agreed to the terms and can download the app, as you can see in the following example showing the Amazon FreeTime Unlimited app: 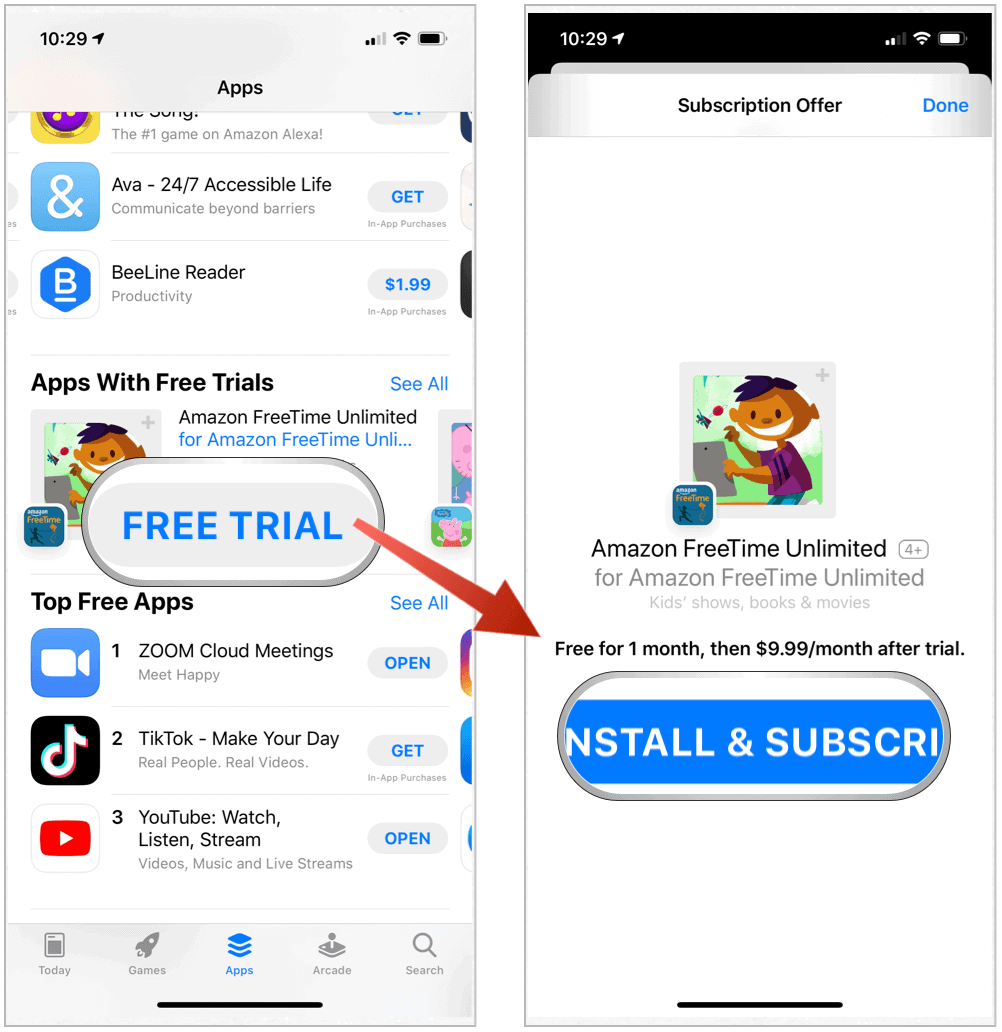 In the case when there’s a Get button, finding the terms of a free trial isn’t as simple, mainly because tapping on the button doesn’t initiate it. Instead, the Get button is used solely to download the app. You’ll find information on the free trial only after you tap on the app for the first time.

What makes this even more confusing is you can find Free Trial and Get buttons for the same app in the App Store.

In the following example, the Get button is tapped to download Amazon FreeTime Unlimited. Once inside the app, you’ll find a Continue button that, when tapped, shows the terms of the free trial. Once you confirm the acceptance of the terms, the app opens full access to the premium features.

In both examples above, the terms of the free trial have been accepted. Once the trial ends, the monthly fee is charged unless you say otherwise.

The reason to try a free app trial is simple enough. For a limited time, you can check out the premium features and decide whether they are right for you. You must decide whether those features are worth the price of admission. If you do not, you must cancel the trial before it is over, so you aren’t charged the monthly fee. However, app developers (reputable or not) and Apple are counting on us to forget the cancelation step.

To make sure this doesn’t happen, cancel the free trial as soon as you accept the terms. Doing so doesn’t remove your access to the premium features until after the free trial is over. By doing this, you eliminate the possibility of getting charged for content you don’t want. Instead, when the trial ends, you can subscribe again, which initiates your first monthly charge.

To cancel subscriptions on the App Store: 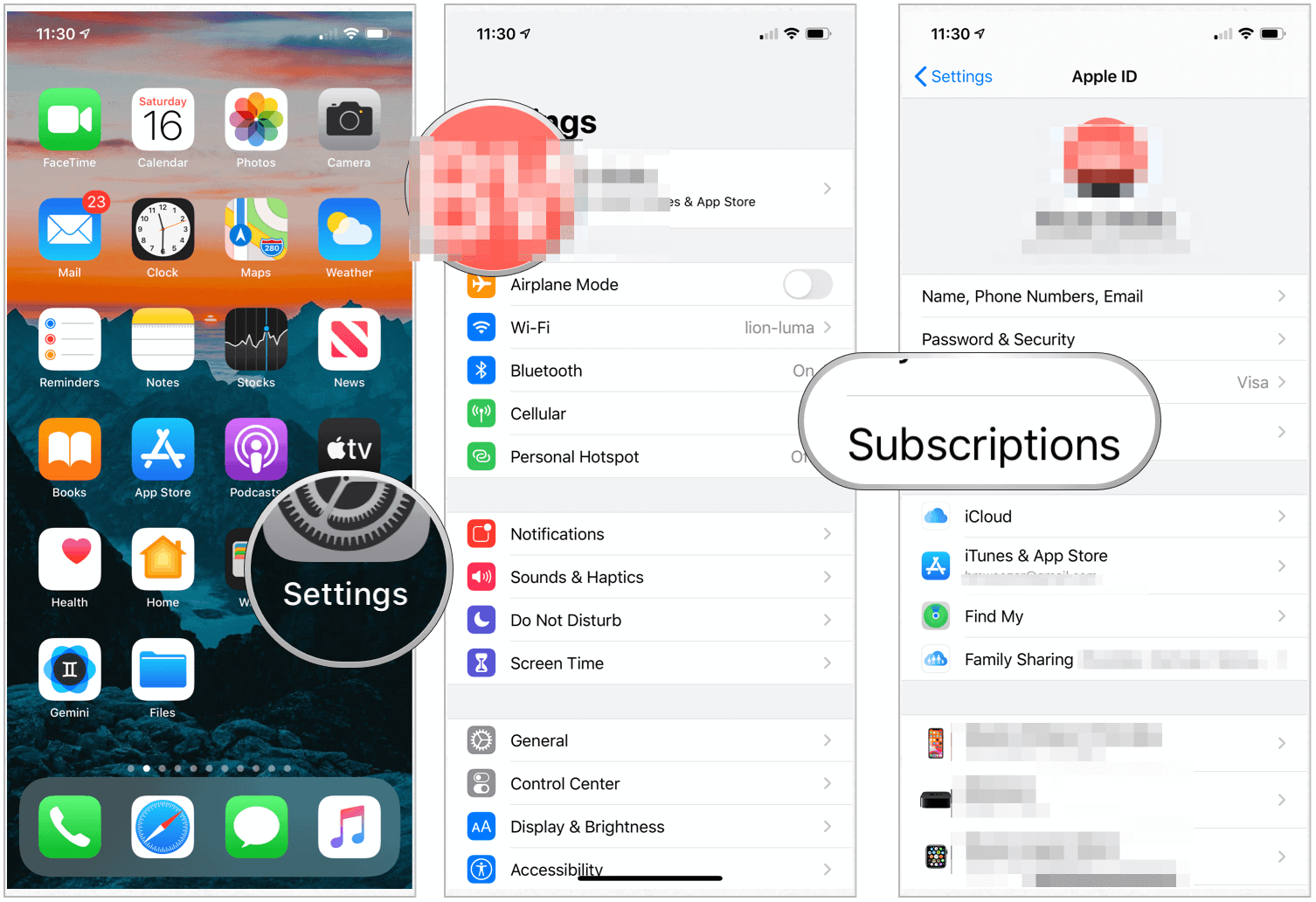 Your free trial will expire as scheduled; when it does, you won’t get charged. 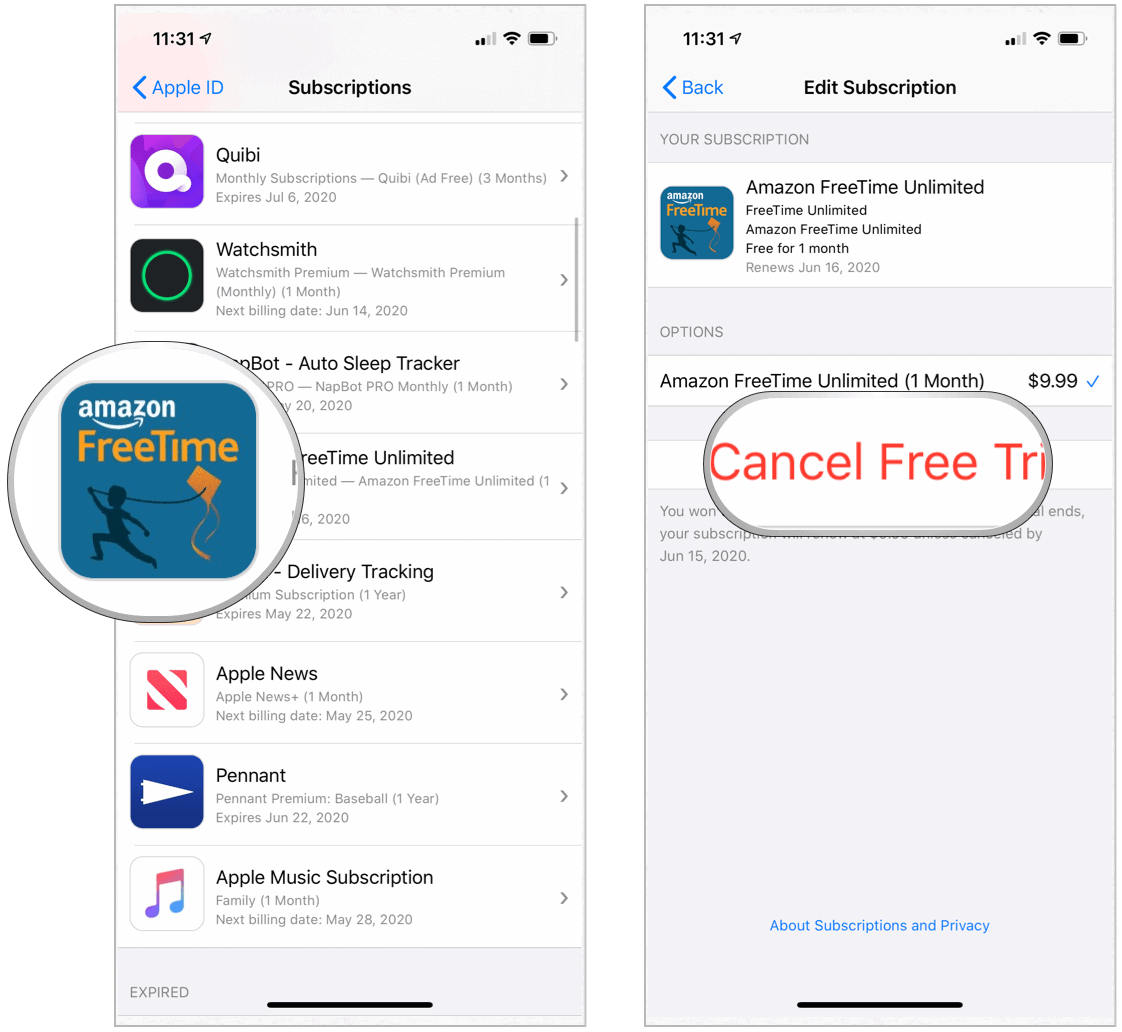 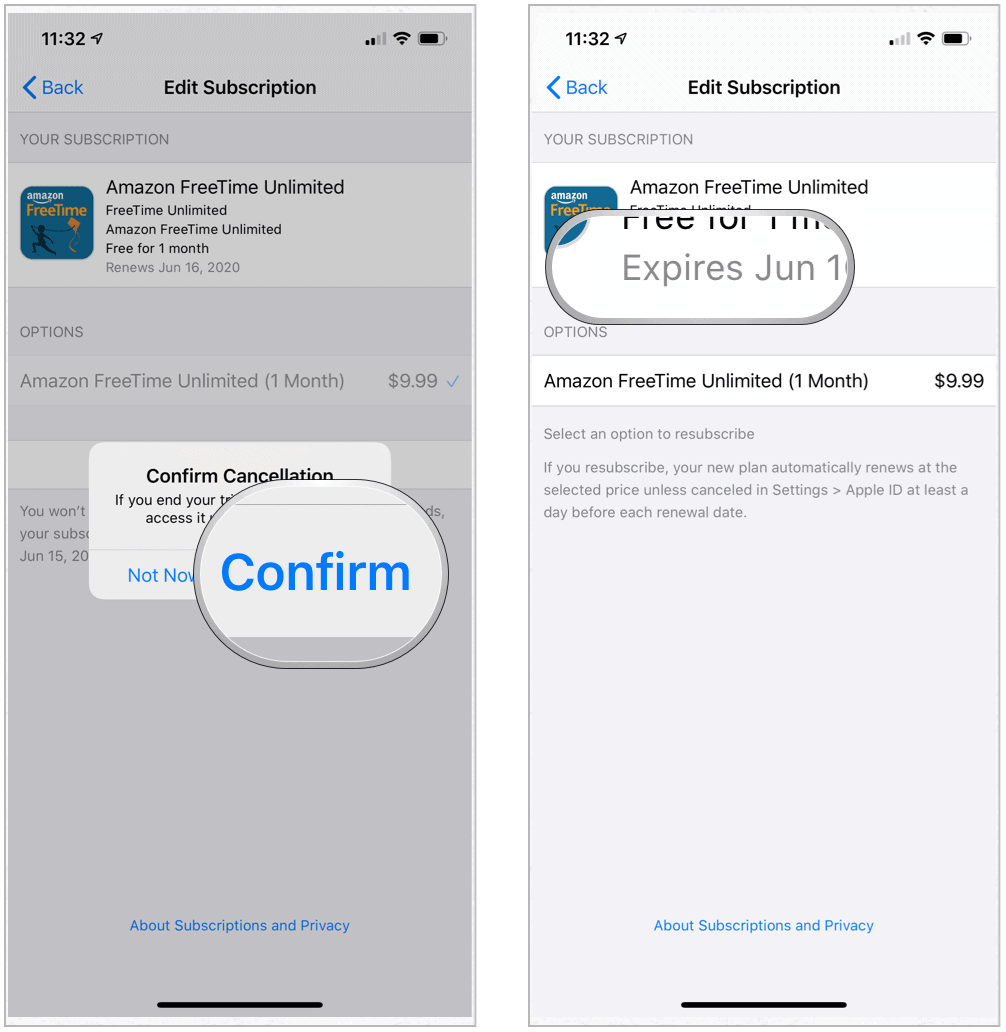 If you believe an app developer has fleeced you, you can contact Apple for a refund or simply to report. As Sophos Labs has already proven, Apple will remove scammy apps when necessary. With hundreds of thousands of apps in the App Store, Apple can’t catch everything without user input. 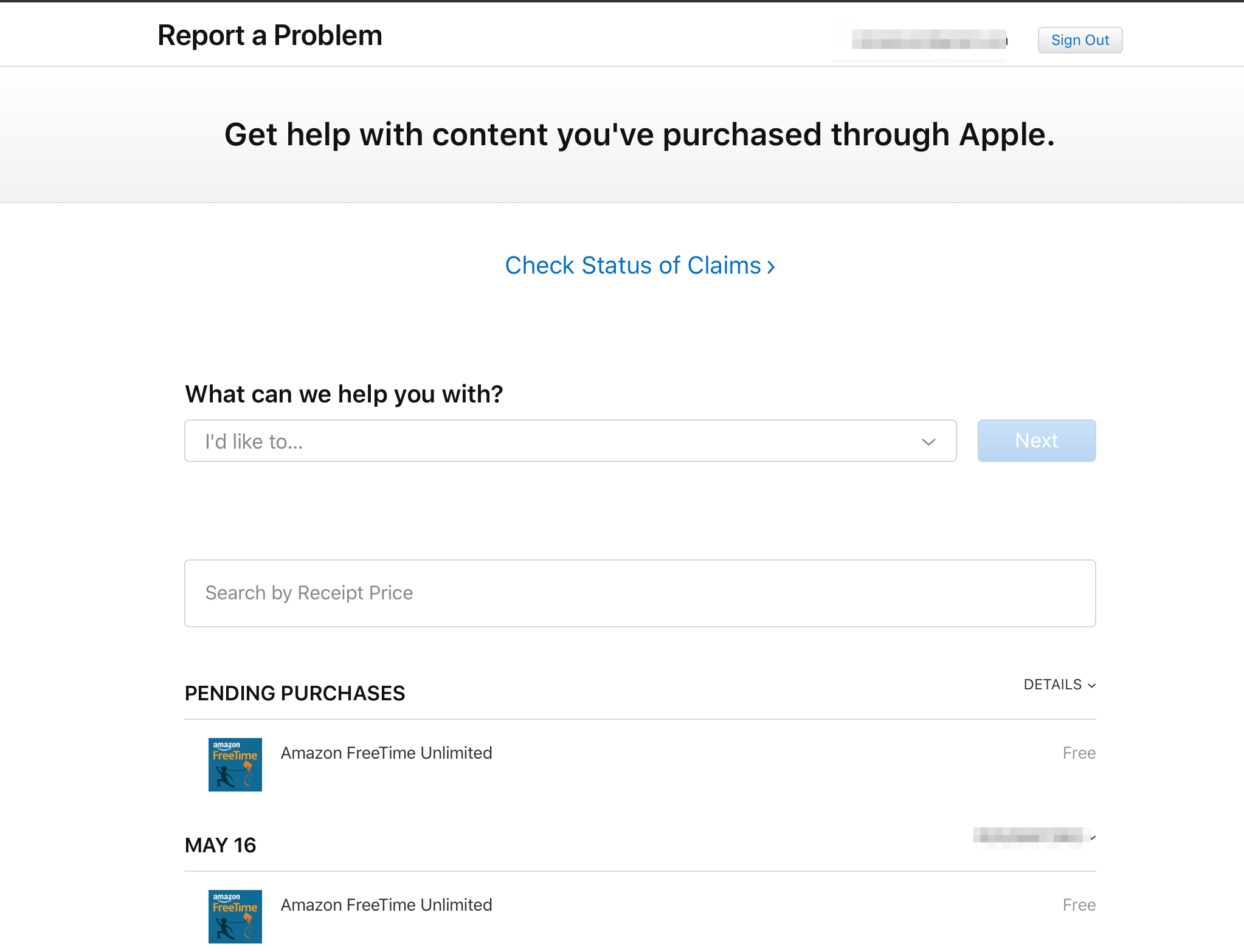 Fleeceware, like other digital scams, only works when people are unsuspecting. When it comes to free app trials, always look at the terms before agreeing to anything. After you do, be proactive and cancel the free trial immediately so you don’t get charged for something you don’t want. When in doubt, contact Apple.