Apple recently announced what it calls a “new type of credit card” dubbed Apple Card. But what is it and what can you expect from it?” Here is a look at what we know so far.

Cupertino says its upcoming Apple Card is a “new kind of credit card.” Whether it is will probably depend on your situation. Regardless, Apple’s newest endeavor has the potential of shaking up the entire credit card industry, and that could be big news for all cardholders in the United States and (eventually) elsewhere.

Apple announced the card in March at an event where it also introduces some new services including Apple TV+, Apple News+, and Apple Arcade. Here is a look at this new endeavor by the company with its continued foray into the financial sector and what you can expect.

What is the Apple Card?

Announced in March 2019 with a U.S. launch date this summer, Apple Card’s introduction didn’t come as much of a surprise. For months, there were rumors the iPhone maker would be partnering with financial powerhouse Goldman Sachs to create a bank card for consumers. The speculation followed the launch of Apple Pay in 2014 and Apple Pay Cash three years later. With Apple Card, the company is hoping to tap into a market where the average credit card debt is reaching nearly $9,000, and the average credit card limit has now surpassed $20,000 in the United States.

Much of the early talk about the Apple Card has focused on Apple’s decision to use titanium for the physical card. While this material is a typical Apple move (hi, bright and shiny new object), the overall Apple Card service has been designed for users to make purchases online using their iPhone and Apple Watch.

Security and Lack of Fees

It’s true. Apple appears to have spent a great deal of time in recent years to credit something different on the credit card friend. What’s most impressive is the company’s emphasis on privacy and the decision not to charge fees. 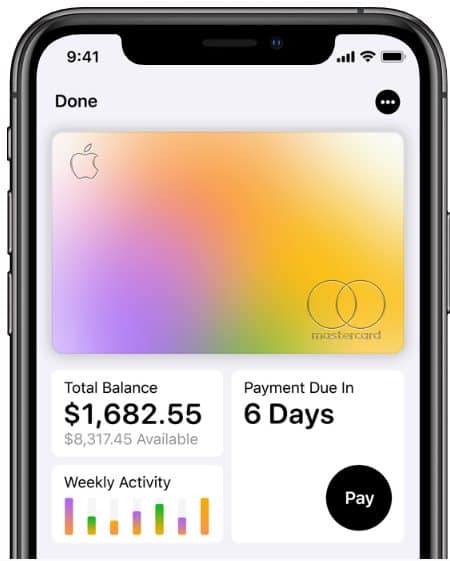 For privacy, Apple Cash offers a unique permanent card number that’s unique for each device. A security chip that’s also used by Apple Pay stores the card’s number. For added security, each transaction generates a one-time “dynamic security code” that are authorized when you use Face ID or Touch ID.

Are you looking for more? Apple has decided to create a system where it doesn’t know where you shop, what you bought, or how much you paid. In other words, Apple’s isn’t using your shopping trends for marketing purposes. Additionally, when applying for a card, the company plans on using two-factor authentication for added security.

The Apple Card itself comes with security features that could make other cardholders blush with envy. The titanium card doesn’t have a number, CVV security code, expiration date, or signature line.

When it comes to fees, Apple Card doesn’t have any. That means there’s no annual fees, no cash-advances, and no international fees. Apple has also decided not to charge over-the-limit or returned-payment fees. Also excluded are late payment fees and the application of new high-interest penalty rates. Where Cupertino will make money with Apple Card is on the interest it charges. The company promises to “provide interest rates that are among the lowest in the industry.”

As another security measure, you’ll receive an instant notification every time a purchase is made using Apple Card. You’ll also receive a notice when would-be unusual activity might have occurred. If a charge went through that you didn’t authorize, Apple will take over, and you won’t be liable for any fraudulent charges.

Like other credit cards, Apple Card will come with bonuses to entice new users. At launch, these include a three percent cash back on everything you purchase from Apple, no matter the physical or virtual location. You’ll receive this reward when you make purchases at an Apple Store, apple.com, the App Store, or through iTunes. Yes, this includes games, in-app purchases, and services like Apple Music, iCloud storage, and the company’s upcoming Apple TV+ program.

Apple Card also gives you back two percent whenever you make a purchase using Apple Pay at non-Apple locations, such as Target, Walgreens, or wherever Apple Pay is accepted. Finally, Apple’s also offering one percent back on purchases made at locations (physical, online and through an app) where Apple Pay still isn’t accepted.

The best part. You won’t have to wait very long to receive your cash back. It’s sent at the close of business each day, allowing you to use the money immediately through Apple Pay Cash in the iOS Wallet app.

Security, cash back, and zero fees might already be enough to make Apple Card a winner. However, I’m also excited about using the many smart tools Apple has promised to help us keep track of our purchases and payments. 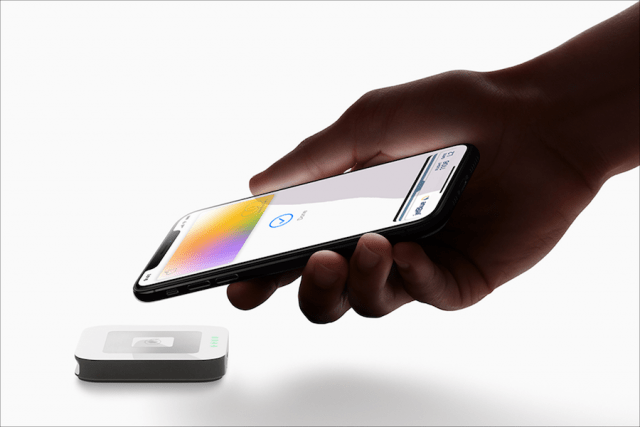 Cupertino says Apple Card “lives on your iPhone” to “help you build a healthier financial life,” and this appears to be the case. On your iPhone, you’ll be able to see how much you’re spending and where on a weekly or monthly basis. But there’s more. Apple also plans on spotting trends in your spending so you can decide whether you wish to change them.

In a unique twist, Apple Card will also use your iPhone’s Maps app to pinpoint where you bought something. In doing so, you’ll no longer have to guess where you made a purchase. Apple Card will also determine the category for each transaction. For example, if you’re visiting the local movie theater or baseball field, the odds are reasonably high that you’re spending on entertainment. Conversely, multiple trips to Starbucks or Dunkin’ are a strong indication that you are spending on food and drink.

From your iPhone, you’ll also have a clear and concise idea of just how much you’re spending on interest. More importantly, it will show you how you can save money by making larger payments each month on your balance. This information, available in real time, allows you to make an informed decision when it comes to payment time.

Apple Card also offers up smart payment suggestions that encourage you to pay a little more than you usually would and help you pay off your balance faster.

About your payment. Apple Card payments all have the same due date — the last day of the month. Knowing this should make it easier for you to make a payment. For added benefit, Apple also allows you to set up weekly or biweekly payments to match your payday. More payments per month mean lower interest payments, which is another benefit.

There are a few unanswered questions and yes, concerns, about Apple Card. Hopefully, Apple fills in most of the blanks before the card launches later this year. 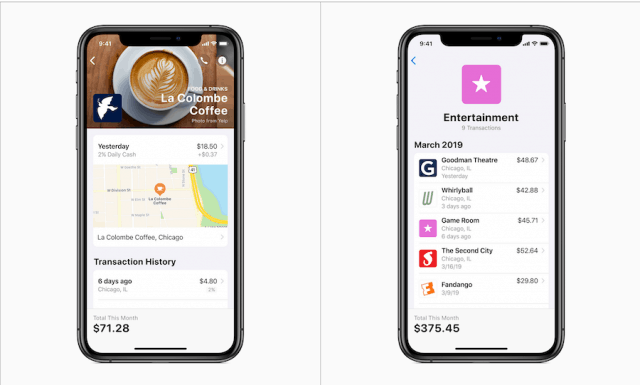 Apple is really pushing you to use Apple Pay in concert with Apple Card by making the most significant cash rewards available through those types of purchases. Purchases made where Apple Pay isn’t available to make a purchase only give you one percent cash bonuses. Perhaps more troubling: the physical Apple Card lacks a contactless chip which seems like a step in the wrong direction. While it doesn’t surprise me that Apple’s rewarding both loyal Apple users and Apple Pay vendors over everyone else, it does suggest Apple Card could become another niche Apple product. The company’s future financial reports will tell us whether that’s a big deal or not.

Apple says it plans on charging less on interest than most in the industry. This plan sounds good until you read the fine print. In March 2019, the variable APRs Apple quotes are a range from 13.24 percent to 24.24 percent based on creditworthiness. According to an April 2019 LendingTree survey, Apple’s rates are either right in line with what others are charging or higher. Additionally, Apple doesn’t seem like it will embrace sign-on bonuses like zero percent programs like other vendors do to entice new customers. This omission could prove problematic, especially when it comes to attracting consumers with higher credit ratings who have more choices.

How far will Goldman Sachs push?

Through its personal finance platform, Marcus, investment firm Goldman Sachs has been slowly building new revenue streams by offering high-yield savings accounts, personal loans, and digital financial planning tools. The Apple Card, however, is the company’s first entry into the credit card market. Just how far does the company plan to go to make the Apple Card a success? What about when a recession hits? These questions won’t be answered overnight, but are important nonetheless.

We still don’t know what type of credit rating would-be Apple Card customers need to qualify for their piece of titanium. Currently, Apple only says, “US customers can now sign up for the latest news about Apple Card on apple.com/apple-card. Apple Card will be available to qualified customers in the US this summer.” My bet: Poor and Fair credit consumers shouldn’t apply.

What about after the U.S. launch?

There was never any doubt that the Apple Card would first launch in the United States. For now, Apple has been mum on when an international launch will follow and whether Goldman Sachs will be involved in those ventures.

What about expanding Apple Pay?

Without Apple Pay, there’d be no Apple Card; without Apple Pay, you aren’t going to get the same cash back bonuses. With this in mind, it would be nice to know whether Apple is spending the time before launching Apple Card to entice other vendors to join Apple Pay. And if they are, which companies are about to come on board. Yes, the number of companies accepting Apple Pay continues to grow. However, not everyone does, and it would be convenient if they would. Another thought: Isn’t it about time Apple Pay arrives on non-Apple devices? Is this even possible with Google Pay and Samsung Pay online?

When is Apple Card launching?

We’ll probably be hearing more about Apple Card at this year’s Worldwide Developers Conference (WWDC), which kicks off on June 3. Hopefully, at that time we’ll also find out the actual launch date. As it stands, those in the U.S. should expect the card’s arrival to happen anytime between mid-June and mid-September.