Apple Music Spatial Audio with Dolby Atmos and Lossless Audio is here and ready to change how you listen to your favorite tunes — assuming you have the right equipment.

Apple Music Spatial Audio and Dolby Atmos Lossless Audio are finally here. It’s all big news for subscribers, although you’ll still need the right equipment to experience all the new features. Regarding lossless audio, you’re also going to have to decide how to use it, so you don’t end up paying extra because you went over your cellular data limits.

What is Apple Music Spatial Audio?

First, let’s take a look at Spatial Audio and what it means for your listening enjoyment. With Spatial Audio, you’ll hear supported Apple Music titles coming from all directions from your supported devices. Think about the multiple sounds you hear at the cinema, and that’s basically the concept behind Spatial Audio, except, in this case, the sound moves with you as the position of your device changes. To succeed, Spatial Audio relies on gyroscopes and sensors on the devices.

Initially launched only for video, Spatial Audio on Apple Music is supported on all AirPods and Beats headphones, including an Apple H1 or WI chip. Additionally, it works with the built-in speakers in the newest iPhone, iPad, and Mac versions.

It’s also worth noting that Microsoft has Spatial Audio on Windows 10 built-in. For more on that read our article on how to turn on Windows Sonic Spatial Sound in Windows 10.

What About Dolby Atmos?

Dolby Atmos is similar to Spatial Audio and allows film and music creators to designate where sounds are coming from and the distance. With Dolby Atmos, a listener may hear content from up to 128 channels played on up to 34 separate speakers at the same time. Headphones, which have much fewer physical speakers than sound systems, can still support Dolby Atmos using unique mixing techniques. The result is a highly effective simulated 3D audio experience that features depth and direction.

At least initially, you’re going to find more Dolby Atmos content on Apple Music than Spatial Audio. More adoption from artists, however, will change this so that most tracks will support both technologies.

There are different ways to set up and use Spatial Audio with Dolby Atmos on your Apple devices. You must also keep in mind that supported devices such as iPhone only work when using built-in speakers or supported headphones.

Here’s what you need to do to get started with Spatial Audio With Dolby Atmos on iPhone or iPad: 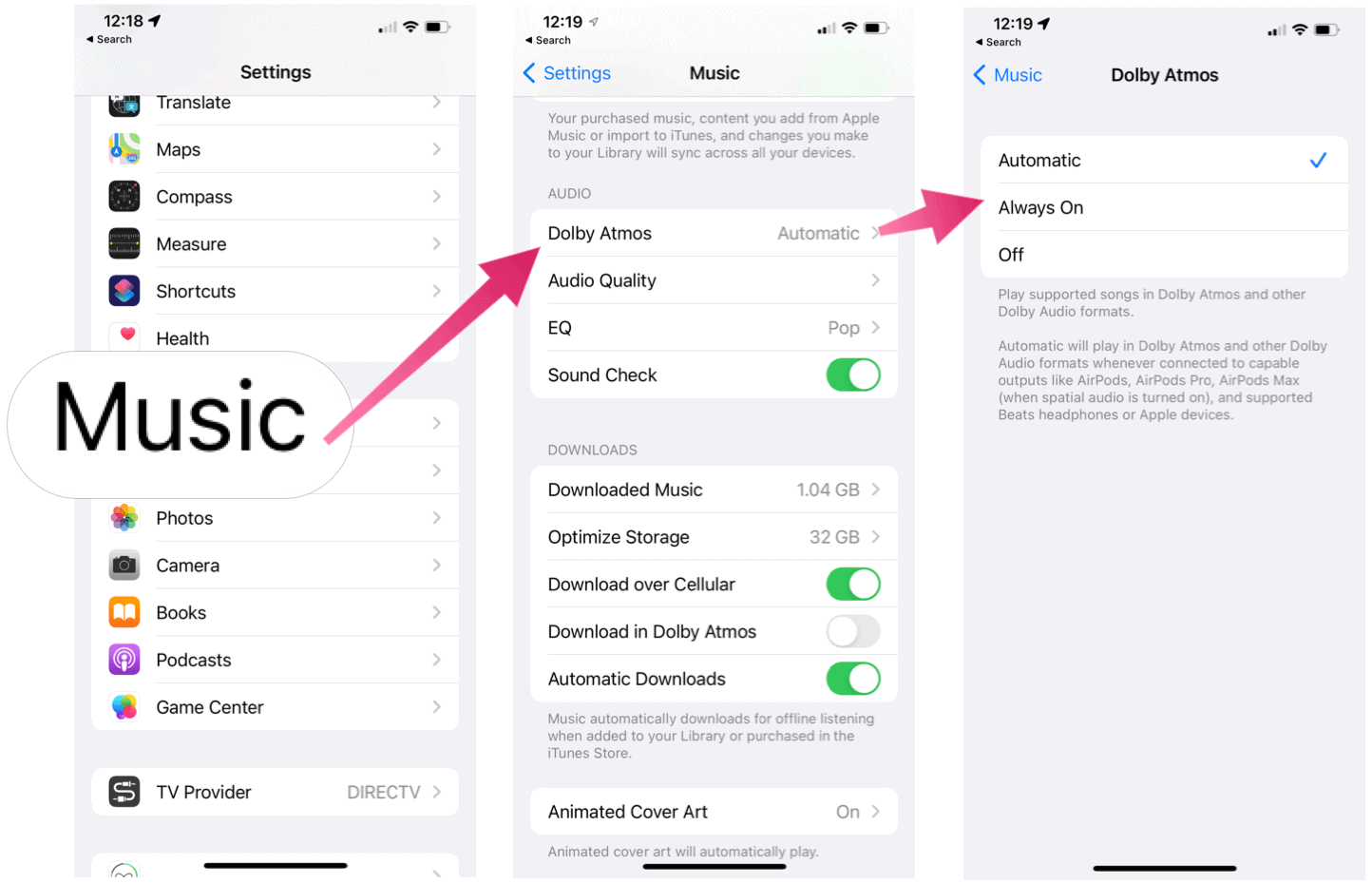 When Automatic is selected, Apple requires the following:

Use Always On as your setting if you want to use other headphones that don’t support automatic playback. The setting only applies to headphones.

On macOS, do the following to use Spatial Audio with Dolby Atmos:

To enjoy Apple Music Spatial Audio with Dolby Atmos on an Apple TV, you must have a first- or second-generation device, plus any of the following:

Is a Track or Album Supported?

Content that supports Apple Music Spatial Audio with Dolby Atmos is marked as such, regardless of the platform, as you can see in the examples below. 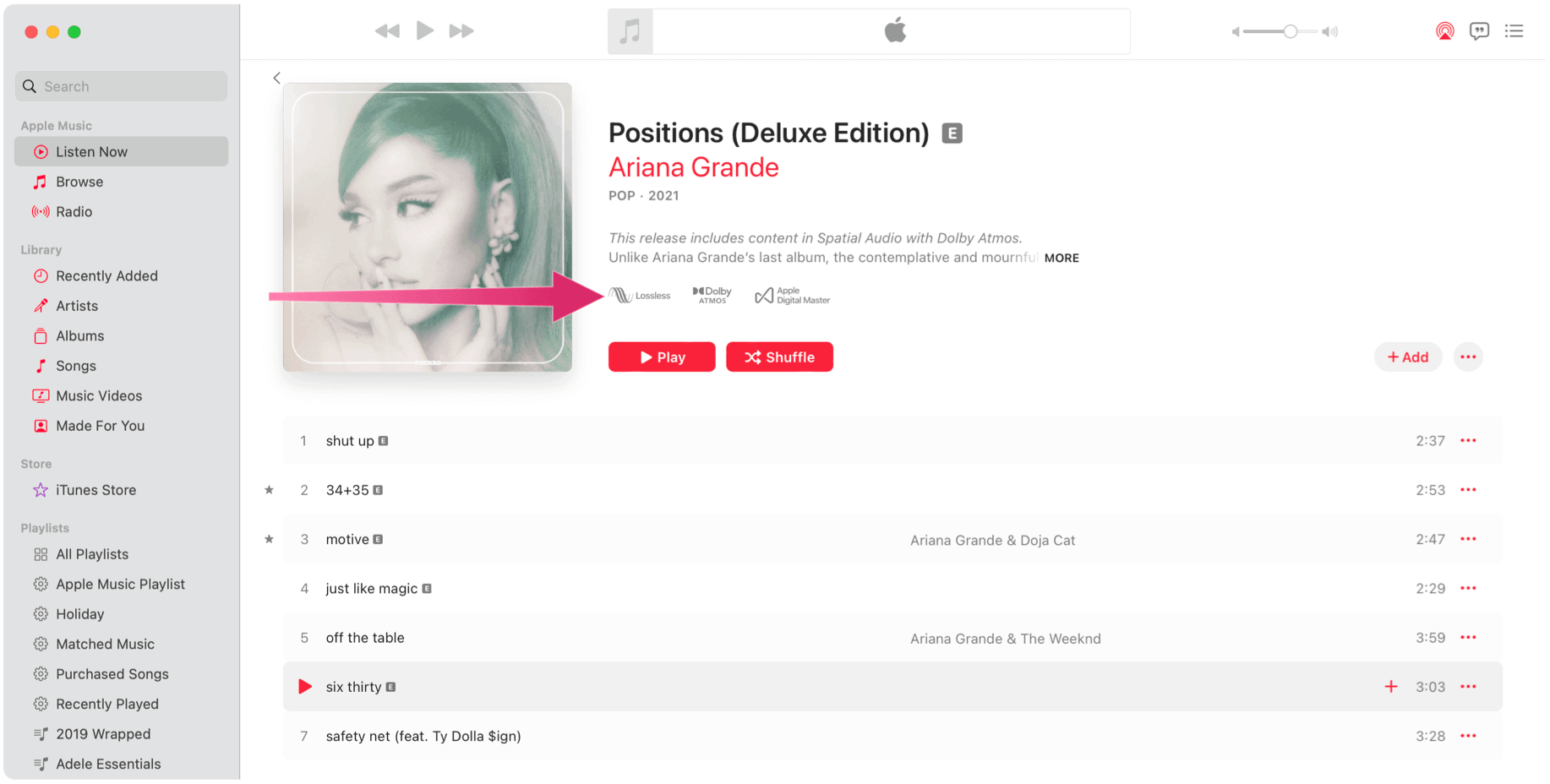 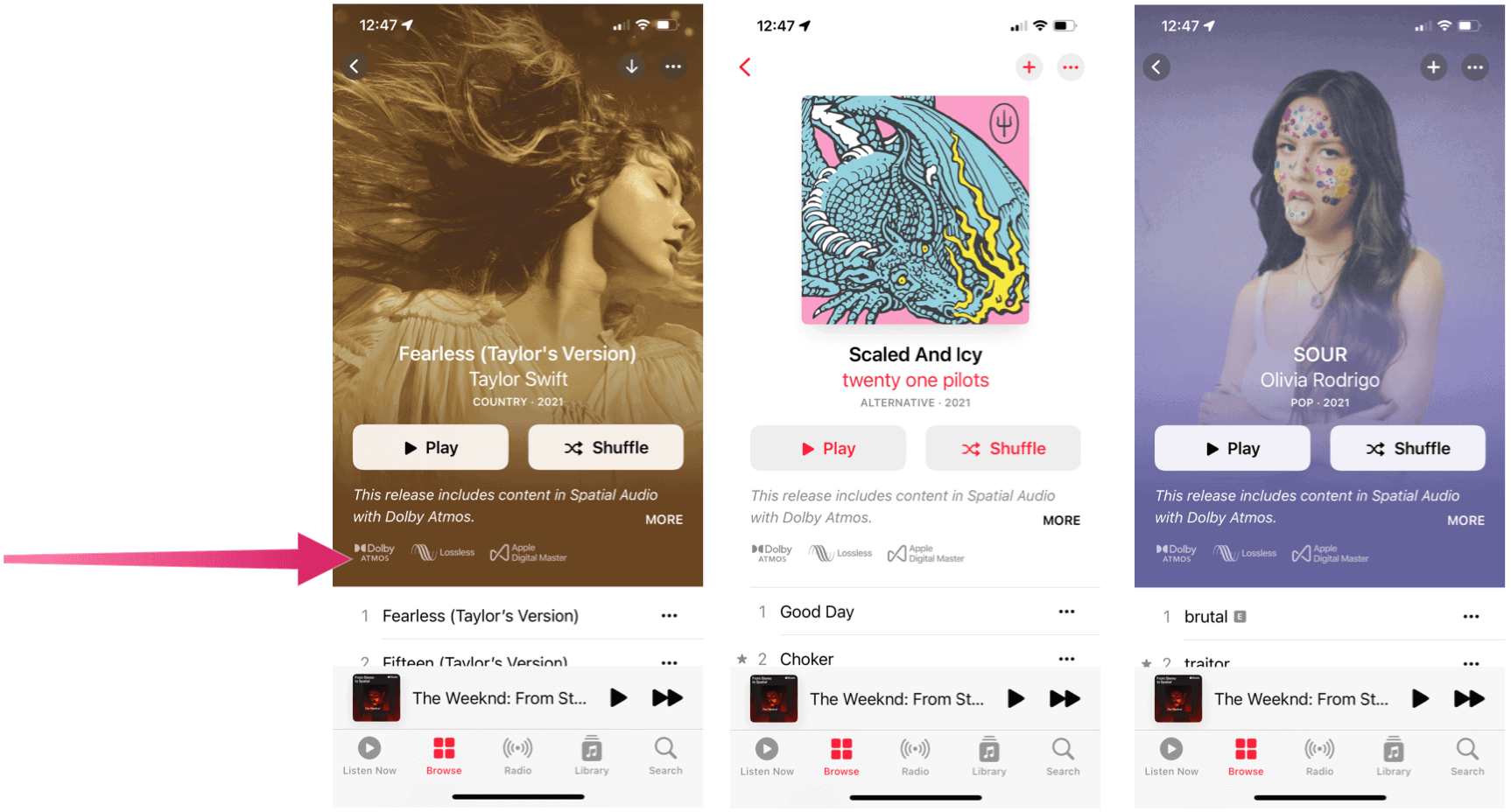 With Lossless Audio is where things get interesting. As we noted previously, with Lossless Audio, tracks are compressed, then decompressed without impacting the integrity of an original recording. This results in songs that sound the same as the artist who recorded them. For Apple Music, the company’s offering Lossless Audio starting at CD quality, which is 16 bit at 44.1 kHz and goes up to 24 bit at 48 kHz natively on devices like iPhone, iPad, and Mac. The highest choice will hit 24 bit at 192 kHz.

Even if a track supports Lossless Audio, as does your device, you might not actually hear it in the format. That’s because the requirements are much steeper than Apple Music Spatial Audio with Dolby Atmos.

To listen to Lossless Audio on your iPhone or iPad, you must have: 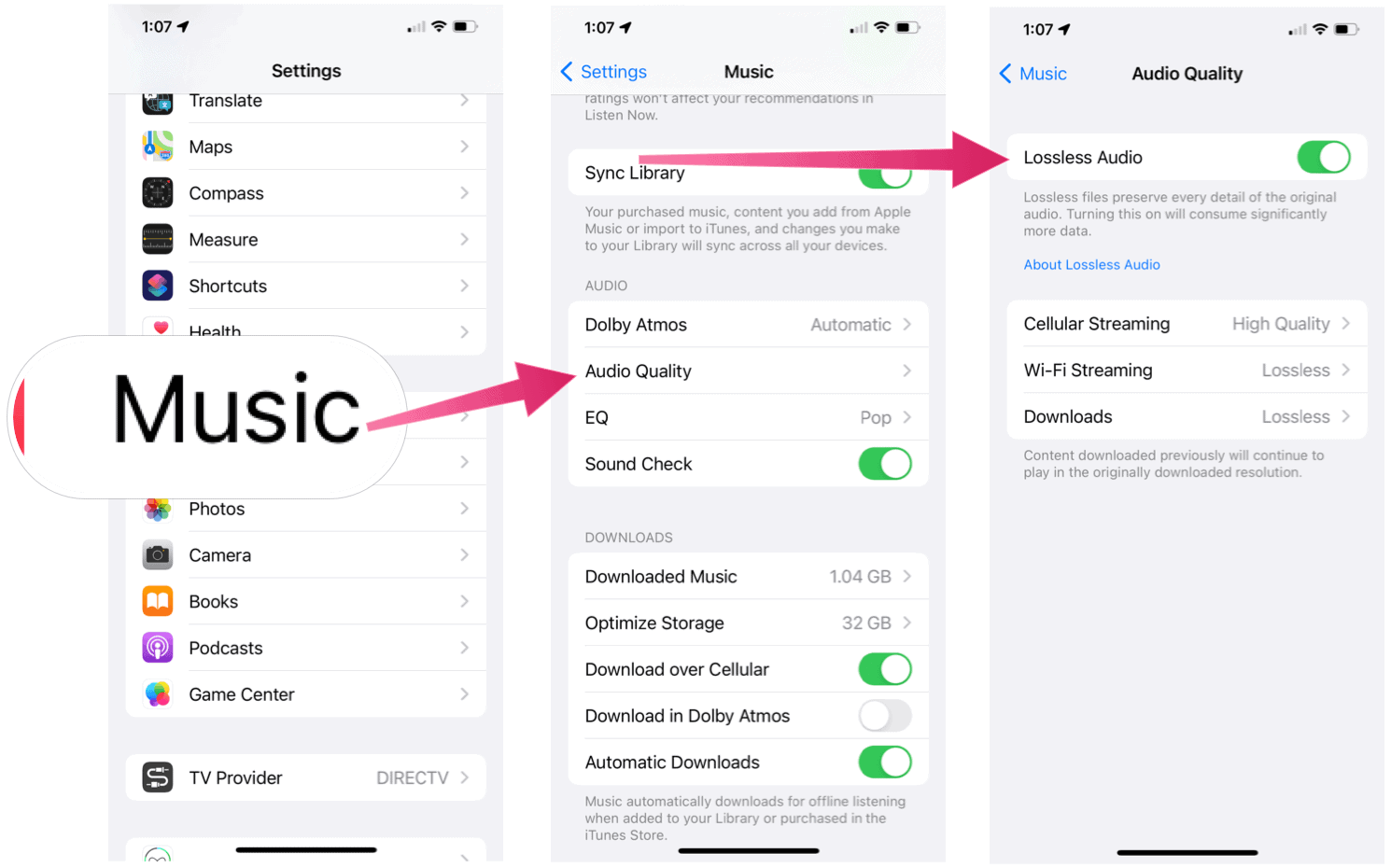 You can now select the audio quality for Cellular, Wi-Fi streaming, and Downloads. The choices for Lossless Audio include:

As noted above, Lossless Audio over a cellular or Wi-Fi network consumes significantly more data. Additionally, downloaded Lossless Audio files use much more space on your device, with higher resolutions using more data than lower ones. Watch you don’t go over your cellular limits.

To listen to Lossless Audio on your Mac, you must have: 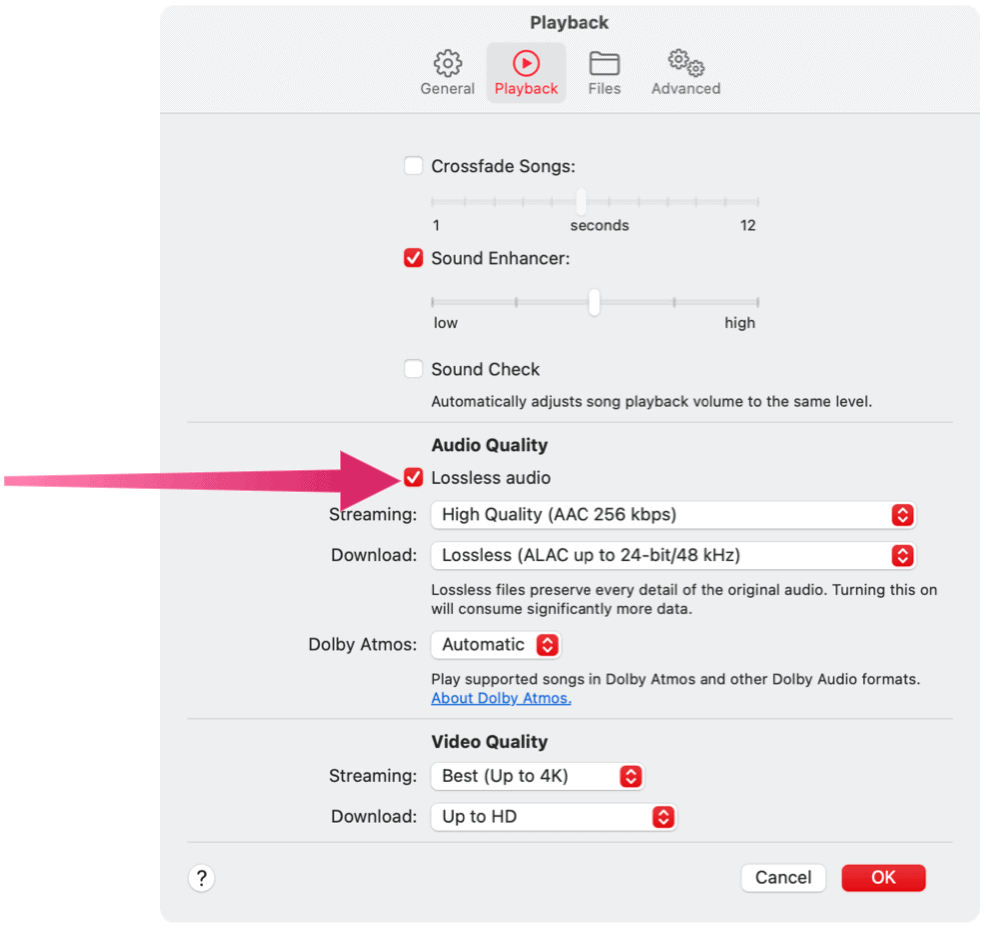 Once again, Lossless Audio over a Wi-Fi network consumes significantly more data. Additionally, downloaded Lossless Audio files use much more space on your device, with higher resolutions using more data than lower ones.

Lossless Audio: Does It Matter?

While it’s great seeing Apple Music offer Lossless Audio (and without a price hike), you must be asking whether the requirements and large file sizes make it worth it.

Perhaps, it’s best to read what Apple said on the subject:

While the difference between AAC and lossless audio is virtually indistinguishable, we’re offering Apple Music subscribers the option to access music in lossless audio compression.

Cupertino’s decision to bring Spatial Audio with Dolby Atmos and Lossless Audio with no price hike for subscribers is a big deal for the consumers and the company alike. For users, having higher-quality music is obviously better. And for Apple, the new features make it less likely someone will ditch Apple Music for something else because of the natural compatibility between the music updates and hardware.