Ubuntu is like that strip mall that they put up near your old high school that you only drive past once every Thanksgiving. Maybe you’ve never pulled in and patronized it, but each time you see it, you notice something new: “Oh wow, they’ve got a Culver’s now.”

For me, that attitude towards Ubuntu has recently changed. Due to some technical difficulties with my main work computer, I’ve been using my Ubuntu netbook full-time for the past few days. So far, the experience has been very positive.

What is Ubuntu and How to Get Started

For those who aren’t familiar with Ubuntu, Ubuntu is just about the most user-friendly distribution of Linux that you’ll find. It’s maintained by a group called Canonical, and they release a new version of Ubuntu every six months. Ubuntu is by far the closest thing you’ll get to a Microsoft Windows-like experience without shelling out hundreds of dollars. That’s because it’s free.

Although you’ll often hear geeks and hackers extol the virtues of Linux, you don’t have to be a geek to use Linux. Ubuntu has a lot to do with that, and over the years, they’ve done an awe-inspiring job of getting Linux to work “out-of-the-box” for novice to intermediate users. After my recent re-evaluation of Ubuntu, I think Ubuntu is definitely ready for the mainstream. In fact, given the increasingly high costs of Windows and Mac software, I’m surprised more users aren’t fleeing to the land of the free (i.e., open-source).

So, I’m curious to hear from you: Why you haven’t tried Ubuntu? 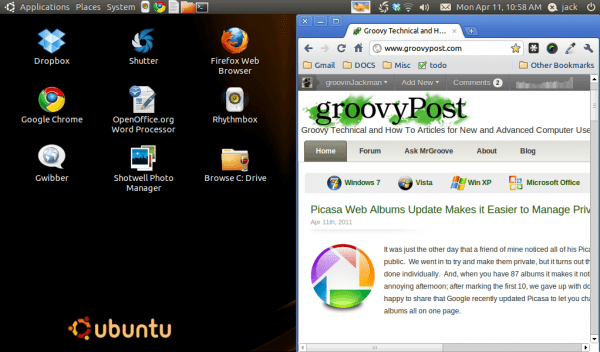 For me, it was because I couldn’t live without certain programs. But in the interceding years since I last tried Ubuntu full-time, much of what I do for work or play has migrated onto the web. So now, it hardly matters what OS I’m using, as long as it supports the Chrome Browser.

I guess that your answers will likely be similar, and I’d like to devote a few groovyPosts to addressing those concerns. I believe that Ubuntu can achieve virtually anything that Windows or OS X can without an inordinate amount of hassle. So, tell me why you are reluctant or afraid to use Ubuntu–I’ll be using your feedback to cobble together a comprehensive groovy guide to Ubuntu that should get you up and running with Linux as your everyday operating system.