Accidentally deleted your photos from an SD card? Best Buy’s Geek Squad will charge you $249 to undelete your photos. PhotoRec lets you do it for free.

If you’ve never accidentally deleted a photo from a USB drive or erased a memory card, then you are some kind of superhero. For the rest of us, accidental deletion is a fact of life—it’s bound to happen to you at least once while importing photos and videos or migrating devices. Fortunately, there’s a way to undelete photos from a flash drive or SD card. Even better, it’s free. 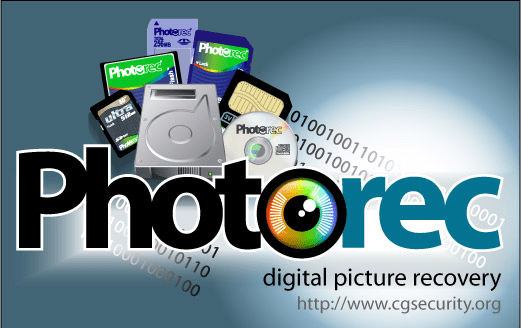 PhotoRec is a free and open-source, cross-platform utility that lets you recover data from a hard drive, flash drive, SD card, and other removable media. It’s a companion program to TestDisk, another open-source program that’s long been used by data recovery gurus for repairing partitions and making non-bootable disks bootable again. Together, PhotoRec and TestDisk are a powerful set of free data recovery tools. Undeleting photos and videos are just the tip of the iceberg. And it’s incredibly easy to do. I’ll show you.

The Scenario: Photos Accidentally Deleted from a USB Drive

For the purpose of this tutorial, I’m going to recreate a real-life scenario using a USB drive. My sister-in-law was importing photos to her iPhoto library from an SD card and something went haywire. The photos didn’t import, but OS X thought they did. So, the computer wiped the SD card clean even though the photos weren’t saved to the hard drive. She was left with no photos on her computer and no photos on her card. In this instance, PhotoRec was able to recover all the photos (including some that had been deleted months ago).

To recreate this situation, I’m going to save some photos of the groovyPost staff to a newly FAT32 formatted USB stick. 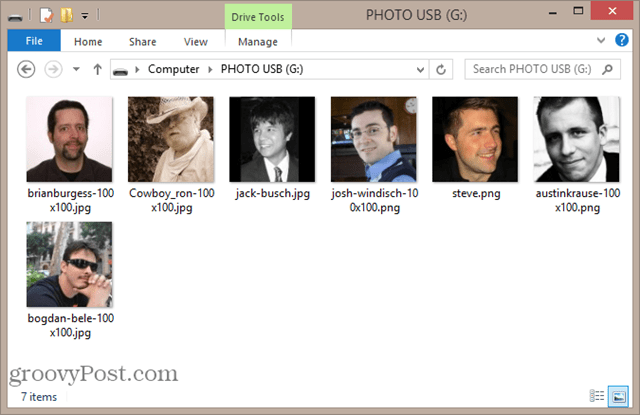 And then I’ll delete them. I’ll even skip the Recycle Bin by pressing SHIFT + DELETE 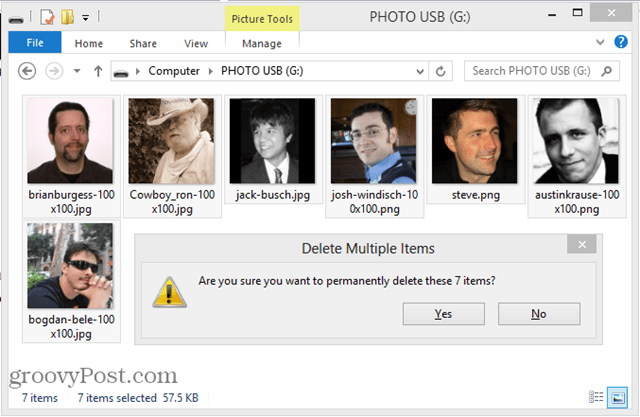 As you can see, the photos are really, really gone. 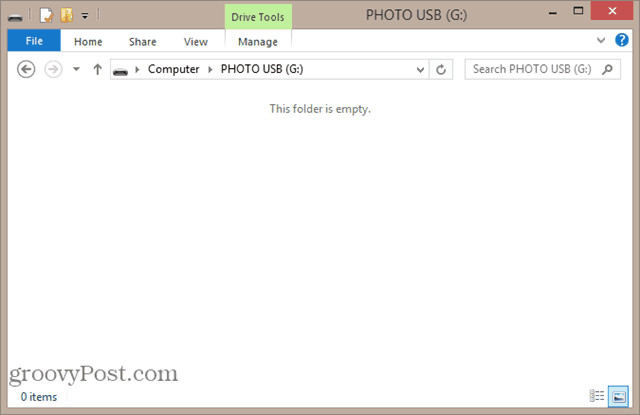 Okay, we have our problem. Now, the solution:

Download the latest stable release of TestDisk. I recommend getting the plain old Windows version. There is a Windows 64-bit version, but it lacks some features. The 32-bit version will work fine on most versions of Windows Vista, Windows 7, and Windows 8. 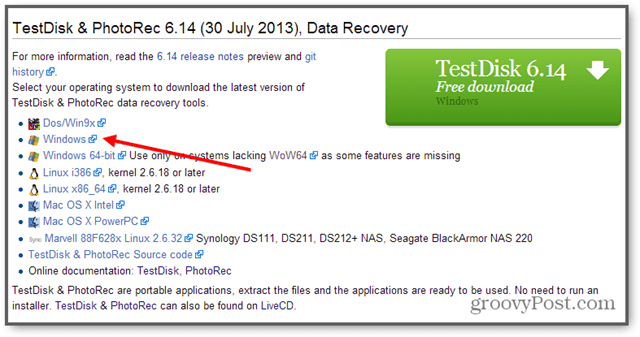 If you are using Mac OS X or Linux, get that version. It all looks the same when you run it. 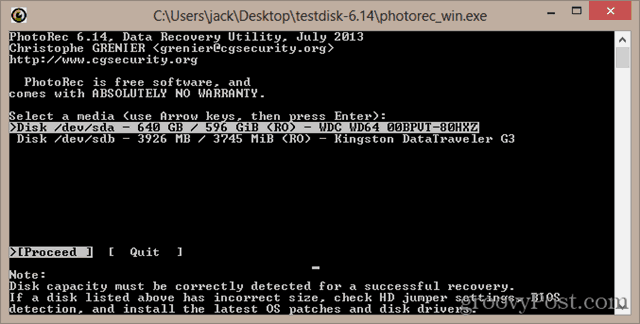 Choose the correct disk from the list. You can usually tell by its description.  You can also tell by the size of the disk. I know that my USB drive is a 4 GB drive, so the one that is shown as being 3926 MB is clearly the correct one. The first disk listed will usually be your system disk. Press Enter when you have the right disk selected.

Next, you’ll need to choose a partition. If the drive isn’t corrupted, you should see the partition with the file system you chose when you formatted it.  If not, you can search the whole disk by choosing No partition. 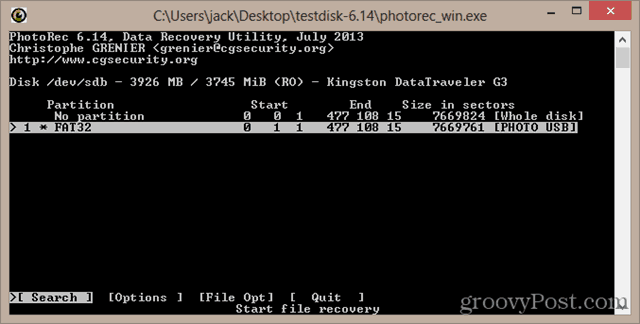 Next, choose the file system. If you run Windows or Mac OS X, choose Other. If you run Linux, choose ext2/ext3. 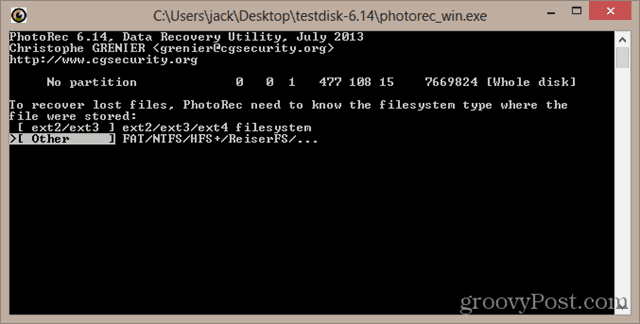 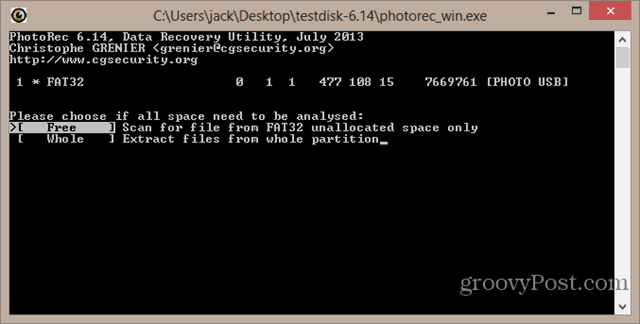 Choose a directory to save your recovered photos. Do not save the photos to the same media from which they are recovered. Writing to a disk with deleted files always reduces your chances of a successful recovery. Save them to your local hard drive or another removable drive. Choose a folder and then press C. I’m going to save the photos to my D:\ partition.

Note: Don’t save photos in your C:\Users\[user] folder. Sometimes, this causes problems in Windows 8. See the notes below. 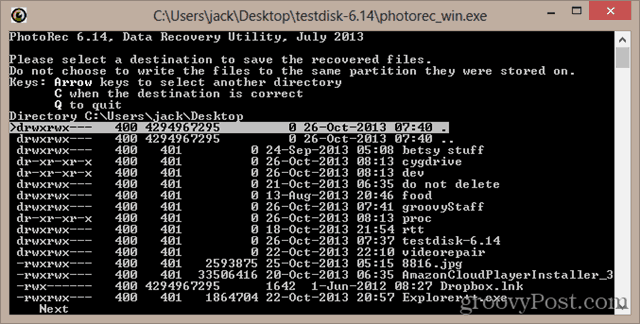 The scan begins. PhotoRec will tell you when it finds a file. 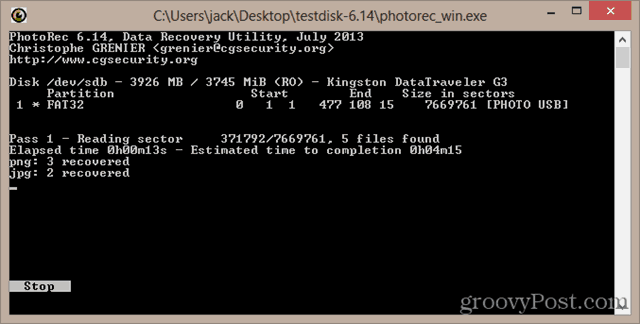 When the recovery is complete, PhotoRec will say “Recovery completed.” It’ll also give you a list of the folders where the recovered data is saved. If there are just a few, it’ll be in a folder called recup_dir.1. If there are many files, then it’ll split it into multiple folders. 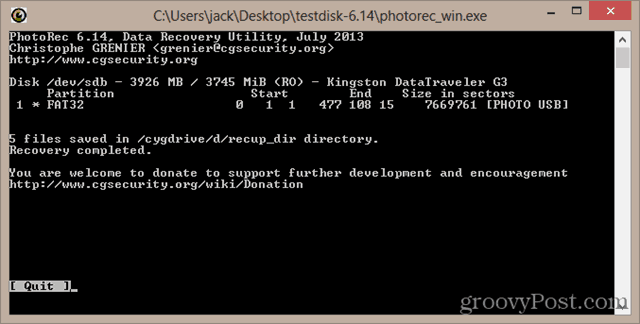 If you open up the recup_dir folder, you’ll see the recovered files. The file names and some of the metadata may have been lost. But the image will be preserved. 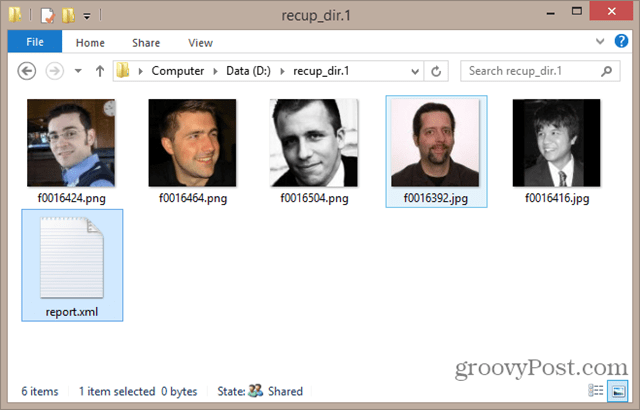 In some cases, the exif data—such as camera model, location, and date taken—will be recovered, too.

“PhotoRec has been unable to create new file. This problem may be due to antivirus blocking write access while scanning files. If possible, temporary disable your antivirus live protection.”

I tried disabling Windows Defender and running PhotoRec as an administrator and it didn’t solve the problem. Ultimately, I saved it to the D:\ partition and it worked fine. I think this has something to do with a command-line application writing to your system disk. If you run into this problem, try saving to a folder outside of your user folder or on another drive or device (just not the stick you are recovering from). 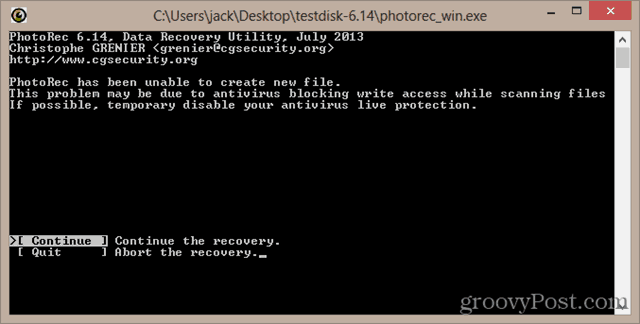 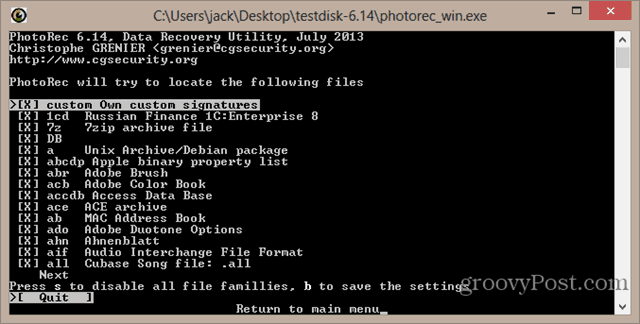 TestDisk and PhotoRec are powerful data recovery tools, and best of all, they are open source. If you are looking for a more user-friendly, graphical user interface, you may want to try Recuva, another free Windows undeletion program. Recuva is even easier to use than PhotoRec, though it doesn’t support Linux file systems (ext2/ext3/ext4) or Mac OS X file systems (HFS, HFS+).

[Get PhotoRec and TestDisk now]

Need help undeleting a file? Shoot me an email or leave a comment with your question.