iOS 8 has a new feature called Predictive text that tries to predict the next word you’re going to type. The anticipated word appears above the keyboard.

Apple’s latest mobile operating system, iOS 8, has a new feature called Predictive text. It puts a menu above the keyboard that tries to predict the next word you’re going to type. Then instead of having to enter the entire word, you can just tap the box with the word above the keyboard.

According to Apple, this feature will get better over time and will do a better job at predicting what you’re going to write based on the way you type words in iMessage, Word, and other apps you type in.

The Android mobile OS has had this type of feature for some time already, and it’s part of Windows Phone as well. If you haven’t used those other platforms, you might want to turn it off on your iPhone or iPad.

To turn it off, head to Settings > General > Keyboard and flip the Predictive switch to Off. That’s all there is to it. Now the keyboard will operate just like it did in previous versions of iOS, without the predictive text bugging you. 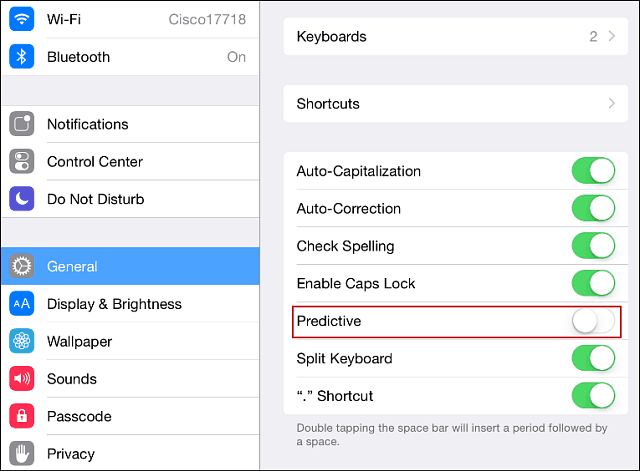 Speaking of Apple annoyances, if you haven’t figured out how to get rid of that U2 album from iTunes, read our article: Remove the U2 Album from iTunes that you Never Asked for.

Do you have any other things that bother you about iOS 8? Leave a comment below, and we’ll do our best on providing ways to turn them off or figure out some sort of workaround for the problem.