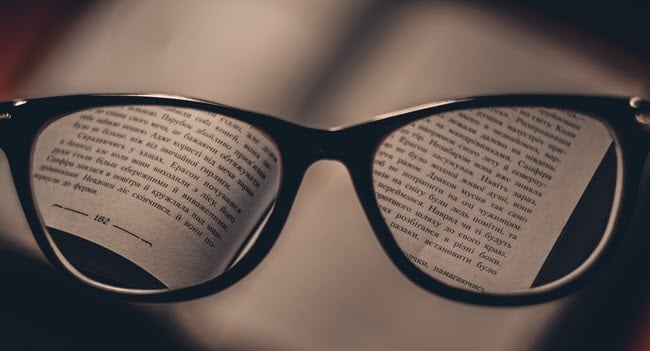 From multi-national corporations to bilingual families, there are many cases where you might come across a Word document in a foreign language. Here’s how to translate it.

From multi-national corporations to bilingual families, there are many cases where you might come across a Word document in a foreign language. Fortunately, Microsoft Word has a few built-in translation tools that can help you convert foreign text into your native language. While it obviously won’t produce pristine grammar as a human translator would, it will certainly do the trick if you want to understand the content of a document written in another language. Here’s how to use the Microsoft Translator service in Word.

How to Translate Word Documents

Before we begin, note that you’ll need to be connected to the internet for the translation service to work.

When you receive a foreign language document, you can easily convert all or parts of the document into your native language. Below is a document in Spanish about airports. That’s about all I know, so we will translate it to know what it says in my native language, English. 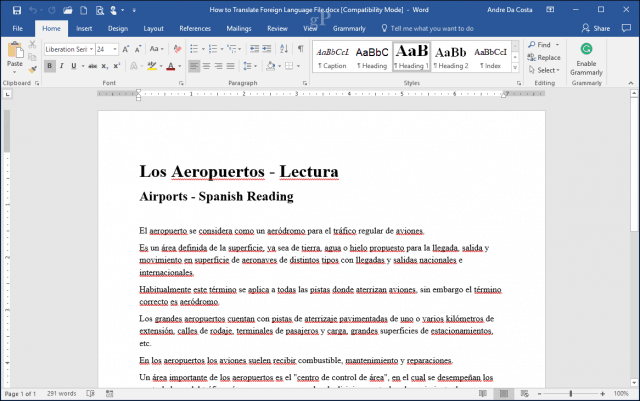 Before we delve into each option, you’ll need to set your translation language if you haven’t already done so. To do that, click Choose Translation Language… 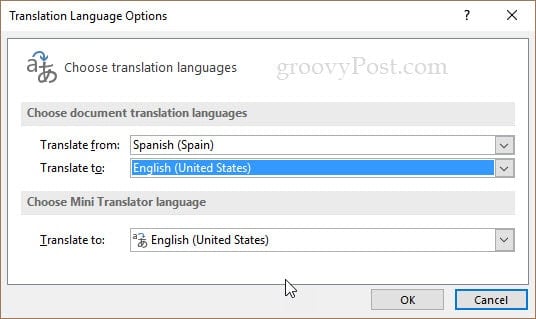 After you’ve done that, you can choose one of the three translation options.

Translate Document will send your document to the Microsoft Translator service, where it will be analyzed and converted into your language of choice. When you are ready, click Translate Document. 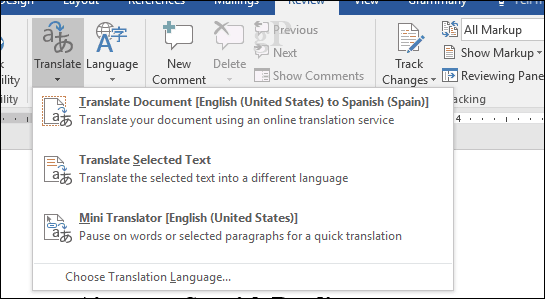 Click Yes. This will then launch your web browser.

Click the translate button, then wait while the text is translated.

That’s it! You should now be able to read the text in your native language. You can hover over each line to see the original text. 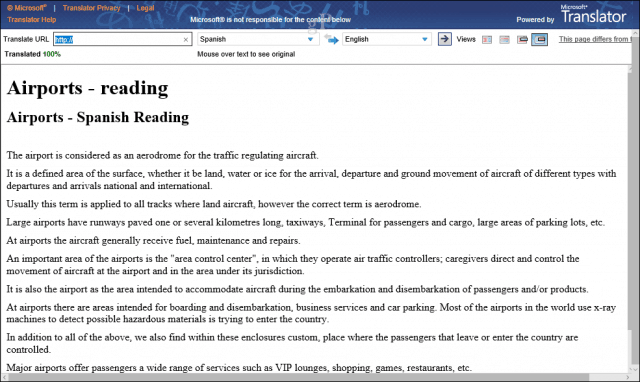 If you only would like to know a part of the document in your native language, you can make a selection then translate it. This will open the Translate Task pane, where you will see your translated text. 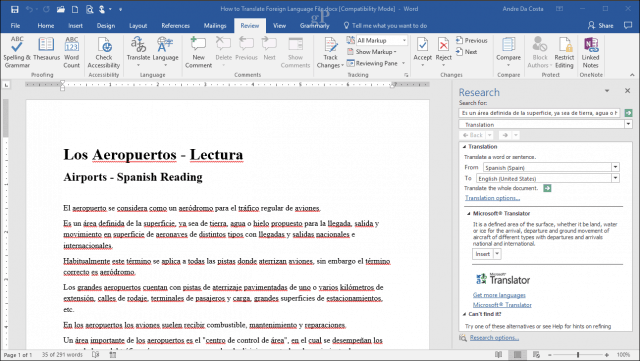 Similar to selected text, this lets you translate parts of the document on the fly by displaying a bubble in your native language. I was initially confused by this option since I thought it would work in Word itself, but it’s actually a feature of the Microsoft Translator page.

Editor’s note: Mini Translator is supposed to create a little dialog box whenever you hover over a word in a different language in Word, Outlook, or PowerPoint. I could not get it to work in Windows 10 Creator’s Update. I tried installing a language pack, disabling my VPN, etc., and still no dice. I’ll update if I get it working.

How good is the translation? It’s not perfect, but it’s enough to help you make sense of the information. Languages are quite complex, especially languages like French and Spanish with their specific conjugations. For team collaboration, though, it’s quite impressive.

There are other minor issues as well. After opening a Spanish language document, it gave me the option to translate from English to Spanish when obviously, the document was already in Spanish. The service itself is not cohesive either; the fact that it still had to launch your browser and require your interaction to complete the translation is disappointing. Hopefully, in future revisions of Word, it will work more like Translate Select Text. Either way, it’s still a handy feature.

Do you find the Microsoft Translator in Word useful? Tell us why in the comments.