With Siri Shortcuts for Spotify, you can automate your listening experience on iPhone and iPad with your voice or a simple tap.

Each Shortcut includes a specific task or multiple actions that get automatically combined into one job. Not all Shortcuts require manual triggering using a voice or a tap. Instead, these shortcuts start automatically based on location, time of day, or other circumstances.

Some Shortcuts run best as a widget, which you activate directly through the app or from notifications from your device. Others are ideally suited for use on Apple Watch. To use a Shortcut using your voice, you’ll be asked during the install process to record a phase. Moving forward, you activate the Shortcut by saying, “Hey Siri,” followed by the phrase.

Most Shortcuts are found directly in the Gallery section of the Shortcuts app. You can also install Shortcuts by tapping a provided link from a supported device.  Once establishing a Shortcut, it becomes accessible across all of your supported devices.

You’ll find links for every recommended Shortcut below. Tap “Get Shortcut” for the ones you want to get started, then tap “Add Shortcut” or “Add Untrusted Shortcut,” depending on whether the Shortcut was created by a third-party.

The following third-party Shortcuts make it easier to enjoy your favorite tunes on Spotify and find new songs with less hassle. All links must be clicked on your iPhone or iPad.

The soundtrack of our lives tends to change often. And yet, the old standbys always bring a smile. These Siri Shortcuts for Spotify are a great way to mix your new and old favorites. 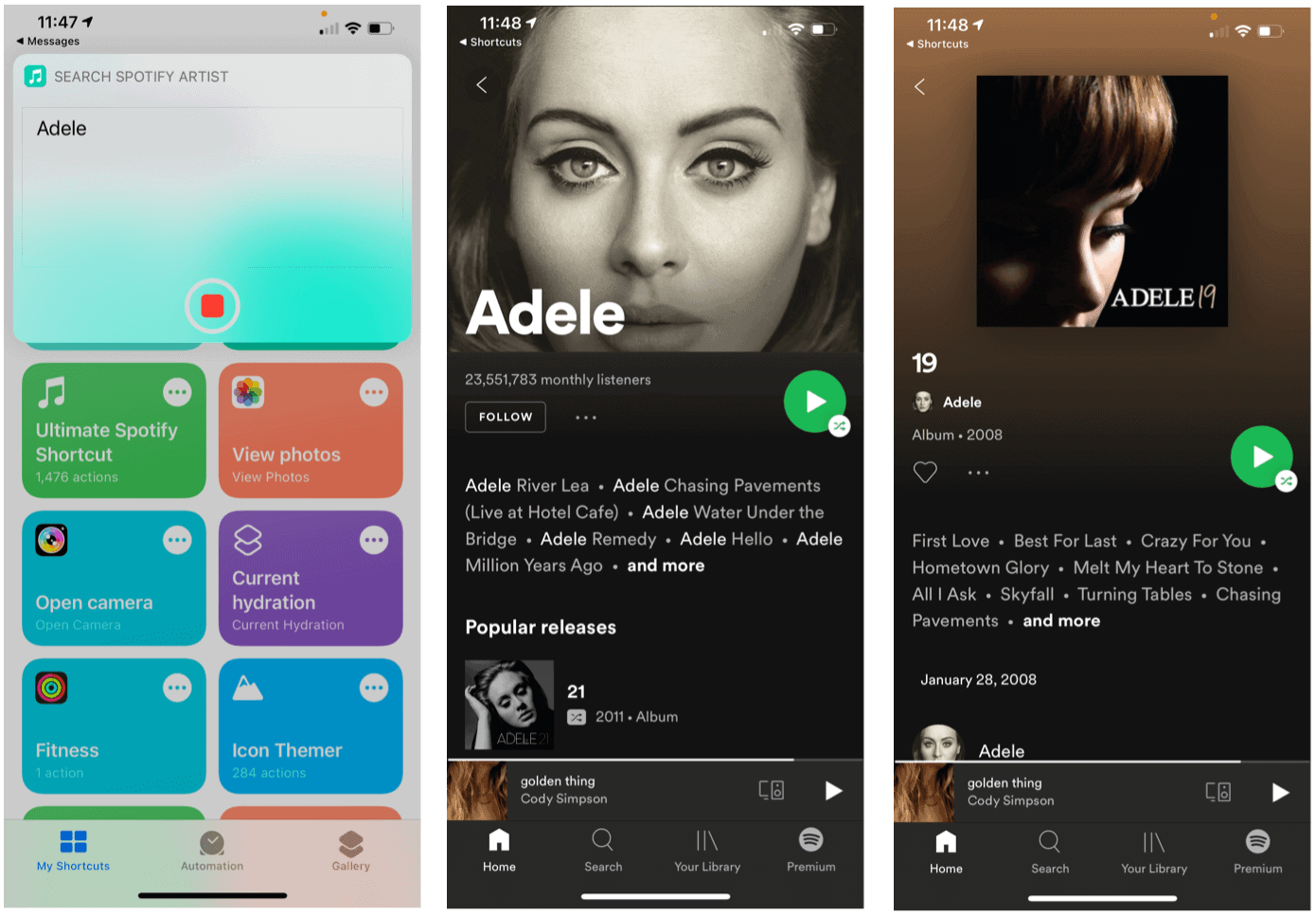 Related: How to Transfer Your Playlists Between Spotify and Apple Music

Perhaps the most popular Siri Shortcuts for Spotify is the Ultimate Spotify Shortcut that’s maintained on RoutineHub. Thoroughly tested for iOS 14 and iOS 13, the Siri Shortcut is loosely based on a series of shortcuts by Carl Hauschke that arrived when iOS 12 was available.

The Ultimate Spotify Shortcut lets you perform various tasks outside of Spotify to find your favorite music. These currently include:

You’ll find the Ultimate Spotify Shortcut relatively easy to set up and extremely useful. Watch as new features are added each. year. If you rather not have a handful of Spotify-centric Siri Shortcuts on your device, this is the only shortcut you’ll need.

Not everyone in your friend’s circle or family uses Spotify. With the Song.link Siri Shortcut, you can convert links across platforms to share them. For example, you’re listening to a new song on Spotify, but your friend is an Apple Music subscriber. With the Siri Shortcut installed, you can share a link (in the format that Apple Music can read) in just a few steps. 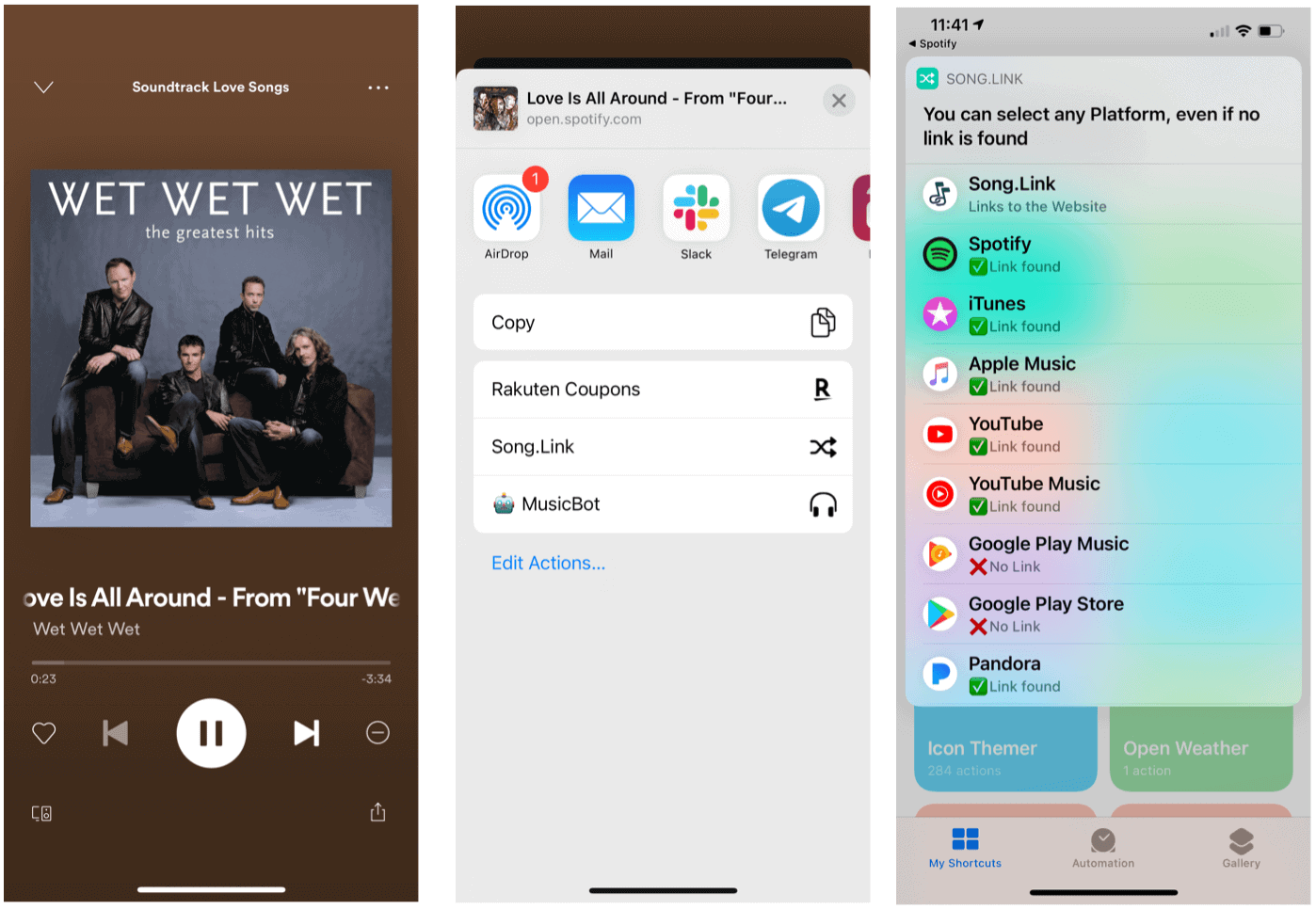 There aren’t nearly as many Siri Shortcuts for Spotify as there are for Apple Music. And yet, the available ones are robust and useful. Use any of the Shortcuts above to make your listening experience better than ever, and enjoy!