I’ve been using the Winamp media player for years now (the funny thing is that I can’t even remember since when exactly) and, for some reason, as a music fan, I keep returning to it, no matter how many other players I try. Here’s what this great (if a bit too complex) player can offer you.

What I like about Winamp is that it can provide you with what you need if you only want to listen to your music collection, but it can also be a very complex piece of software, should you need it that way.  I’ve basically used it as a music player for all these years and although I do use different applications for burning music CD’s and watching Videos/Movies, Winamp is my default App for listening and managing my music collection.  To me, Winamp is a great music player and caters well to most of my needs as a big music fan.

Starting off with it

First of all, if you want to try Winamp, click here, download it and then install it. This article is about the free version, so I suggest you get that one. Most of the time, the free version comes bundled with some free music you might want to try although I personally choose not to install the Winamp agent, as I feel it just adds bloat to the software.  Supposedly it preserves file associations, but I’ve never found it useful. 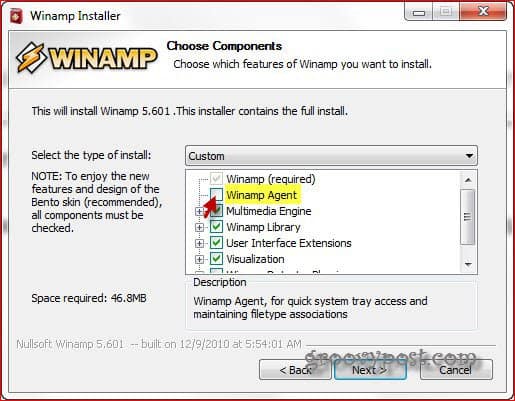 After the installation, you’ll find a clean interface, in which everything is where you would expect it to be (ok, maybe for me, but I’ve admitted to using the thing for quite some time…).

Now, I like having my music collection in my playlist at all times, so what I do first is open the playlist section of the main window (if it’s not on already), hit “Add” and then “Add folder” and load up the folder where I store all my music files, like I did below. 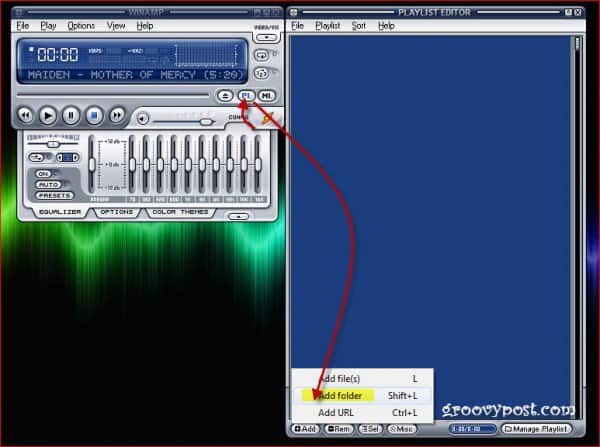 What I love about Winamp is the speed at which files are added. On my computer, it only took around 16-17 seconds to load up almost 20,000 files.

WinAmp has a nice feature that let’s you Tag your music so you can find it and organize it into playlists and burning CD’s.  If your like me however and your collection is massive, tagging your music collection will take a few lifetimes at least.

Fortunatly Winamp has a nice feature that will auto-tag your music by checking with the Gracenote Music Database.  To run it, simply look them up in the playlist, right-click the files and then Select Send To and then Auto-Tag.  Most of the time Winamp won’t have a problem finding all the details / metadata from the Gracenote database that is unless it’s something you created in your garage…

The same menu allows you to burn the respective track (or more tracks) to a CD or to use Winamp’s file conversion feature to convert the file into another format.

The main window also allows you to pull out the EQ drawer, where you can configure the sound of your player. You can create your own sound, but you can also choose one of Winamp’s presets. I personally like to keep things at zero, but that’s me…

Easy to use media library

As I told you, I’m a simple user. I like simple things when it comes to playing music. If you’re into organizing stuff, Winamp also has an extensive library function, allowing you to catalog your music, as well, and access music services online and find out information about currently playing media.

This screen is also the one in which you will be able to find (and listen to) Shoutcast radio and TV stations. I’ve used this feature a lot.  One nice thing about the net is if you get sick of your own collection, it’s , because not finding at least one radio station that plays what I like is virtually impossible…

This screen also allows you to manage your music players, as well as to manage an Android device via Wi-Fi. 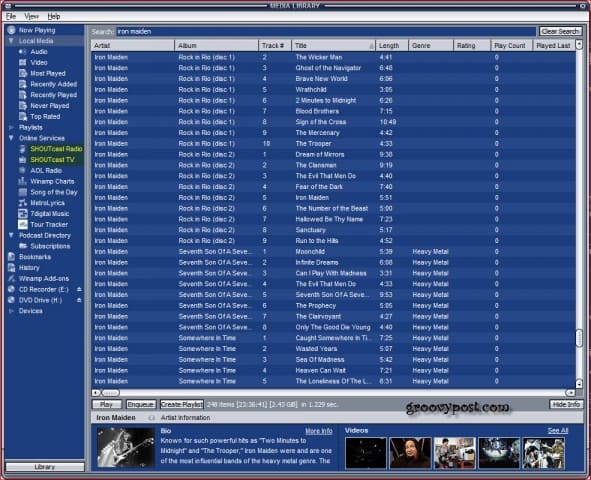 Believe it or not, if you hate iTunes, it’s also possible to manage iPod & iPhone music using Winamp. Still, you have to install iTunes beforehand. It’s not like you’re gonna use it, but you need the USB drivers it includes…  After doing that, just get the iPod support Winamp plugin from here, install it, and you’re all set.

Although I prefer not to, Winamp can be used as a Video player as well as most other types of media you can throw at it so I suggest you play with this if desired.  Like music, Winamp plays videos and most other media types without issues however I do find it a bit slow sometimes opening files but it’s not that bad.

I also like the fact that it’s highly “skinnable” (meaning that you can make it look exactly the way you want it to; there are literally thousands of skins here, as well as on many other sites) and it works perfectly with Windows 7 (just placing your mouse over its icon will show you the controls).

Winamp is a very useful piece of software (and it’s free, too) which I use daily as a music fan.  It has become a little cluttered over the years however I highly recommend it as a music player.  It should be on the list of apps to install the next time you build a new computer from the Ninite.com site.