The idea behind Tweet.io is that it’s so simple that it doesn’t even need an explanation. Visit Tweet.io and you’ll see what I mean. The only instructions you get are “tweet it out” and a button to Sign in with Twitter.  Of course, if you’re already familiar with Drop.io—the very, very groovy file sharing and collaboration tool that we’ve reviewed previously—then you should already know what Tweet.io (pronounced tweet-ee-oh) is going to be about.

It’s a platform that lets you upload pictures, video, audio, documents and more for quick and easy sharing via Twitter.  Like with Drop.io, you’re given a unique, shareable URL as well as an embed code for each file you upload and share. And because Tweet.io links up with your Twitter account, all of your shareables and comments are fed right into Twitter. Check out the screenshots below to see it in action.

As I mentioned, the Tweet.io homepage is very barebones. There’s no help, no FAQ, no “About Us” and thankfully, no registration required. Just Click Sign in with Twitter to authorize Tweet.io to connect with your Twitter account and you’re ready to roll. (Update:The link to user uploaded content has since been removed from the main page.) 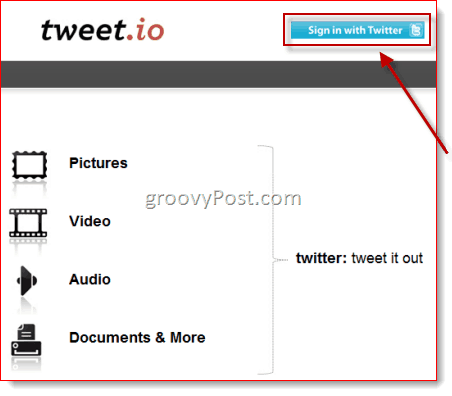 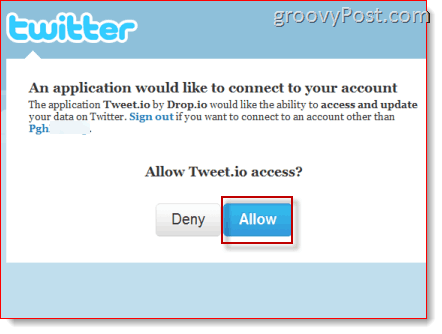 After authorizing Tweet.io, you’ll be brought to your Tweet.io profile, which, again, is totally barebones.

The media upload form is meant to be self-explanatory, but it isn’t really. Maybe it’s just too early in the morning for me, but I had no clue what the Url field was for at first. It turns out that you can add files to your Tweet.io account either by uploading them from your computer or by copying and pasting a URL from the web. So, if you upload a file, don’t fill out the Url form. If you link an image from the web with the Url field, don’t upload a file. The text that you enter into the Note field will be tweeted out along with a link to the file after you upload and will serve as a description.

After you upload, it automatically gets tweeted out. Oddly, it doesn’t always add a space after your note and the URL. With the New Twitter interface, this causes it to not be clickable, but with TweetDeck and other clients, it’s fine. Just something to keep in mind—you might want to manually add a space at the end of your note until this issue gets cleaned up.

When users click on your link, they’ll be taken to the file within Tweet.io, where they can view it or play it in the embedded player. There’s also a comment box—comments are both tweeted as @ replies and appended to the file’s page. You can also see how many views your item has received. 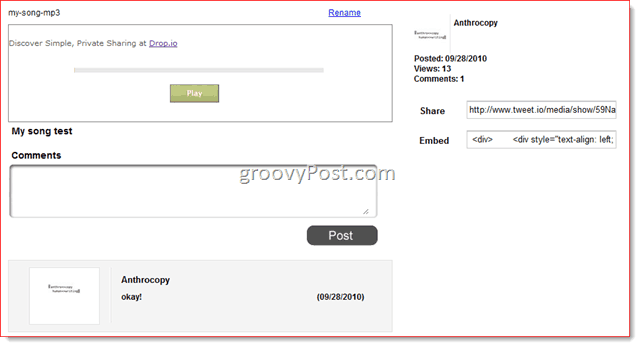 Back on your Tweet.io profile page, you can see a summary of all of your uploaded files. Also, after your first upload, you’ll be given a mobile input email. This allows you to email attachments to your Tweet.io account. When you do so, they’ll be automatically uploaded and posted to Twitter. However, there’s a serious issue with this—your mobile input email is in no way unique. It’s just your Twitter username @tweet.io. Nor is there any kind of approval holding stage for mobile uploads. That means anyone who knows you have a Tweet.io account and has your Twitter handle can upload crap to your Tweet.io and tweet it out. That’s kind of un-groovy.

I gave it a whirl with all the media types I could think of and it all works fairly well. You can upload pictures, videos, audio, documents, text documents and practically anything else and it’ll be hosted and ready to share and download. You can even embed it from Tweet.io, if you’d like. Here’s an example from my test video using the embed code that Tweet.io gives you:

Oops, just kidding–looks like the embed doesn’t quite work with some WordPress installations yet. Hmm… If only there was some kind of help or support page to get this figured out…

So, that’s Tweet.io in a nutshell. And in spite of how hands down groovy Drop.io is, I’m afraid that I can’t really recommend Tweet.io at this point—especially when other Twitter media sharing services, such as Twitrpix, yfrog and TweetPhoto exist. Here’s what I’m not really liking about Tweet.io so far:

That’s my first impression. Lots of kinks to work out before I’d feel comfortable using this service on a regular basis. It feels more like a beta right now. But I’d still be interested in seeing this after some improvements have been made. But until then, I’m doing the following: