Although the venture capital funders are throwing their support—$37+ million of it—behind the social GPS app Waze, my conscience will not allow me to recommend this free turn-by-turn driving directions app to groovyPost readers. It’s not that I don’t want you to be able to get free user-driven maps, traffic reports and turn-by-turn voice prompts from your iPhone, BlackBerry or Android smartphone. It’s not that I don’t think that crowdsourcing traffic reports, speed traps and tips for alternate routes is a great idea. I just do not want you to die.

Let me reiterate: this is not a review of Waze, the social GPS app that may put TomTom out of business and get the traffic reporter from your local news channel laid off. This is a public service announcement (PSA), urging you to please, please, do not download Waze for free and use it to not only get you from point A to point B faster, but also have fun while doing it. By using Waze, which is like a perfect marriage between Google Maps and Foursquare, you will get a groovy social layer to your daily commute, avoid traffic snags and eventually crash and die. So don’t use it. Here’s why:

What if your GPS was interactive? What if it let you communicate with drivers on your route? What if it let someone 10 miles down the highway from you tell you—in real time—that there was an accident and that you should get off at the next exit and go around? What if driving became social in a more meaningful way than honking your horn at jerk-wads who cut you off right in front of the Fort Pitt Tunnel and flashing your lights to alert passersby of speed traps?

Waze answers that question with it’s free app for iPhone, Android and BlackBerry. That answer is that driving would be more intuitive, more fun and more deadly.

Here’s how Waze explains itself:

On paper, Waze is absolutely brilliant. Long before cell phones were anything but a prop for Zack Morris, I always wondered why normal car drivers didn’t have some way of communicating with each other, just like truck drivers do with their CB radios. While it might open the door to some really nasty road rage induced comments, being able to know what the guy in the car next to you knows could save you time, money and perhaps even your life by warning you of hazardous road conditions.

This community-minded network of pooled traffic and driving route information is embodied in Waze’s best feature—its 100% user-driven maps. When users drive around with Waze open, the app feeds data back to the community. This lets other Waze users know how fast traffic is flowing and if there are traffic jams, etc. Waze users can also discover roads that aren’t in the Waze maps. After traversing these unknown roads, they’ll be added to the map for other Waze users to incorporate into their routes or see on their map.

While the Waze community at large is certainly useful, you can also associate yourself with specific commuter groups. For example, in Pittsburgh, there’s a Waze group for everyone who has the unfortunate burden of having to drive up Route 28 everyday. Aside from gaining a sense of camaraderie (and perhaps an obvious source for carpools), Waze commuter groups give you the most relevant information for the roads you drive everyday. It’s like a personalized traffic report.

Waze users can also report traffic accidents and other road hazards. Waze will then be able to tell you how long ago the event occurred, whether it’s on your route and other pertinent details. This is way more information than the radio traffic reports give you, and way more useful. 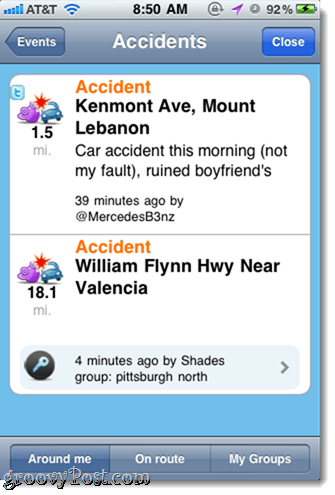 You should notice from this screenshot, however, that it appears that a Waze user was the one who was involved in the accident. Although I wasn’t there, and she claims it wasn’t her fault, I can’t say that I’m surprised. I’ll discuss that later.

Getting Directions from Waze

Even if you’re not interested in the social functionality of Waze, you’ll certainly benefit from the free turn-by-turn GPS navigation that Waze gives you. With the TomTom iPhone app costing a whopping $49.99 and the Google Maps iPhone app being stubbornly limited, you’re not likely to find a better GPS app for the price.

Waze lets you search for addresses as well as location names within 200 miles driving distance (for now). For each route, it gives you a handful of alternatives and an ETA, both of which improve the more you use Waze. 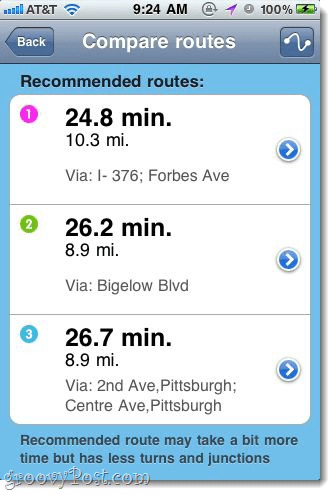 The onscreen icons tell you how many miles there are before your next turn, and the voice prompt is loud and clear, giving you plenty of warning. Waze voice prompts even work in the background, allowing you to listen to music or use another app and still get directions.  There are a number of languages and voices, including Santa, Elvis, a Boy Band and some other fun ones. 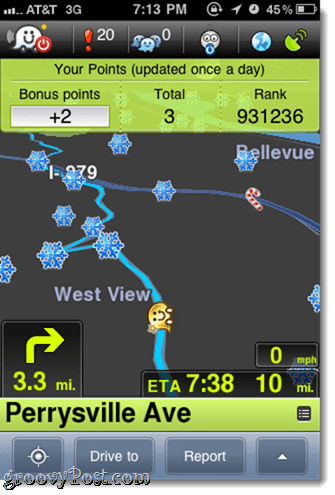 Of course, Waze isn’t perfect—and I still feel a bit nervous trusting it as my sole navigator. For example, in the circuitous overpasses/underpasses/tunnels/bridges surrounding the Pittsburgh area, Waze had trouble figuring out if I was on top of the mountain or in the tunnel, or if I was on the parkway or on the road just beside it. That’s par for the course for most GPS’s, though. But luckily, if you have a smartphone, you also have Google Maps as a backup, in case Waze gets too confused. But unlike Google Maps, Waze can update your route automatically if you take a wrong turn. In terms of automatically reporting traffic conditions, I noticed that there are some false positives. For instance, Waze has trouble telling the difference between a traffic jam (what it calls a “complete standstill”) and a normal stoplight. Also, Waze is quite the battery sucker, due to its constant use of your phone’s GPS. But overall, Waze works very, very well for a free app.

Waze – A Deadly Game to Play

I’d be remiss if I didn’t remind you again that this is not a review of Waze—this is a warning about the deadly consequences of using Waze. Taking cues from Foursquare, Waze has added a gaming element to their social driving app that allows you to rack up points. You get points for driving a certain amount of miles, discovering roads and routes and, most dangerously, driving over little goodies that appear on your route. It’s kind of like you’re playing a giant game of Pacman. I’m not saying that Waze’s gaming aspect isn’t fun—quite the opposite, actually. And that’s why it’s so dangerous. 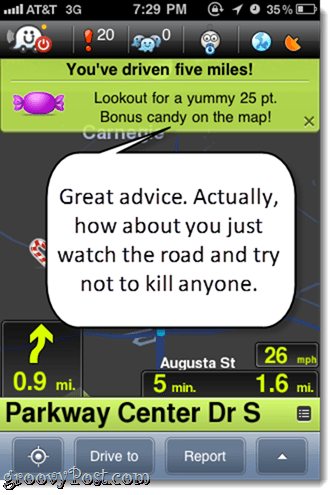 The whole time you’re driving, Waze is dinging and donging, scattering candy across the map like it was a parade and sending you notifications about achievements and opportunities via popups. And even though you know it’s just a silly game, and even though you know that sound is just the noise you hear when you get +2 points for driving over a lollipop, it’s incredibly hard to resist looking at your screen. To make matters worse, some of the prompts only go away if you touch a tiny little X—and in spite of the fact that we all know better, it’s nearly impossible to resist clearing off a notification from any screen. 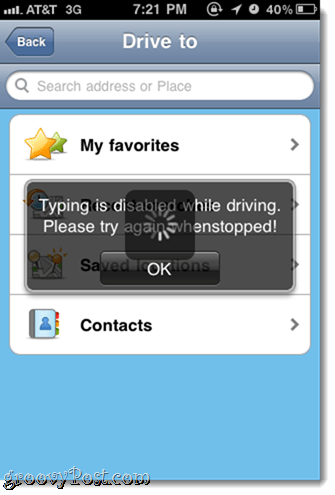 Waze is aware of the dangers of distracted driving, and in an effort to keep you from making a poor decision, they disable typing while the car is moving. That’s all well and good, except that it (A) doesn’t make sense if you’re the passenger in the car—which is really the smartest way to use this app, or any GPS and (B) it actually does let you type while driving if you dismiss the warning message.

I understand the allure of social gaming in location-based apps. I know it’s all the rage, but when it comes to driving, it just doesn’t add value. But it could lead to fatalities, which haven’t been a good thing in gaming since Mortal Kombat. Also, in spite of the enthusiasm from VC backers, Waze isn’t profitable yet—they plan on selling data to traffic companies and including targeted advertising in the app, which will only add to the distraction.