This year Google’s programming site started a new free education program called Google Code University, and while the community around it is small, it has some handy resources.  They’ve got you covered if you’re interested in learning CSS, HTML, JavaScript, AJAX, or Python.  You can also look at some basic instructions for getting started with using Linux, or managing MySQL databases.  This doesn’t involve any actual classes, everything is taught online through tutorials and examples.

Presently Google University focuses primarily on two programming languages, C++ and Python.  It does offer courses on basic Web Programming, but they are seen primarily as pre-requisites for AJAX and thus are only handled lightly.

Most people have heard of C++, but what about Python?  Yeah we know about the jungle snake…  Python is a dynamic programming language that allows both object oriented programming and structured programming.  It’s most commonly used for scripting, where you’ll find it in both web and desktop applications (including Google Docs).  Python is also used in several video games, including the massive multi-player online game Eve Online, and Sid Meier’s Civilization IV.

A basic game coded in Python looks like this example from Invent With Python.

You can get started with Python by watching the video below, or by checking out the Python course on the Google University website.

This language dates back to 1979 (officially named in 1983), and it is by far the most popular programming language ever.   C++ is simple enough that anyone can learn it, though it also allows for advanced functions.  It is used for scripts, small programs, and large programs such as Adobe Photoshop or Microsoft Office.  In fact according to Bjarne Stroustrup, nearly everything made by Microsoft is written primarily in C++, including Windows!

To get started with C++ visit it’s section on code.google.com.

Meet other programming enthusiasts and students

The code.google.com/edu discussion forum isn’t very large, but it is steadily growing.  If you want to share what you’ve learned, or have a question you can drop a note and someone might answer it. 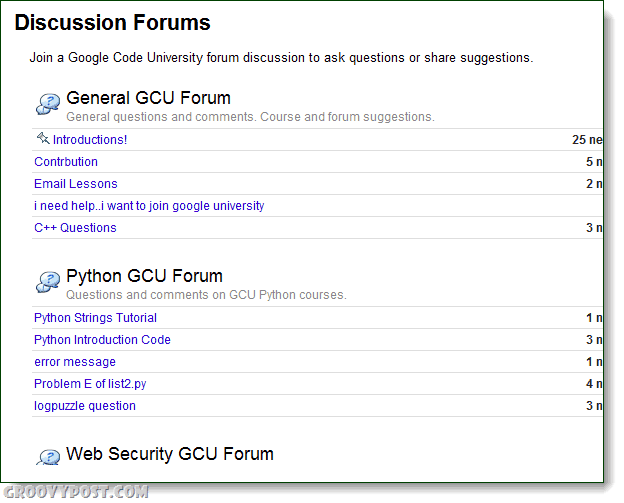 Overall, Google University is a groovy online resource.  It isn’t the end-all for your programming-learning needs, but it can help get you started.  I know it got me interested in learning Python, something I’ve never even touched before.