As we mentioned in an earlier post, Google has launched their Plus social network.  I’ve spent the last day and a half testing it out, and so I’ve had the opportunity to use nearly every feature of the service.  If you were to ask me how to best describe it, I’d say it is like Twitter, Facebook, Skype, and Gmail merged together and formed one, super social, Omni-beast of a website.  The interface is elegant and beautiful, the features are easy to use, and you can “Circle” up with as many people as you want.  However, it isn’t without its flaws.

When you sign into Google Plus for the first time, it takes you to the welcome page.  The welcome page pretty much shows everything that Google Plus can do, and it also notifies you that it is still in a “field trial” rather than beta status.  If you took the service at bare-bone value, it is basically a glorified Twitter, but there are 3 unique features that make it stand out: Circles, Hangouts, and Sparks.  We’ll talk each of those in detail in just a moment. 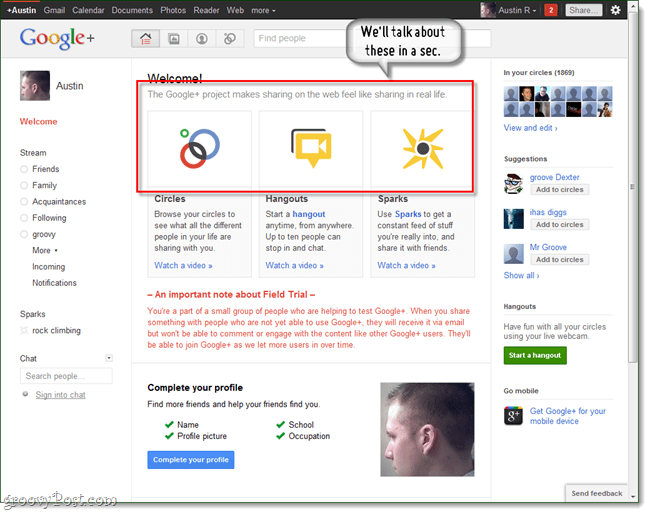 If you’ve used Facebook or Gmail, the interface should be relatively familiar in Google Plus.  Each page is displayed in a 3-column format.  User lists are on the left, your Stream (feed) in the center, and contacts/suggestions are on the right.  Of course, there is a notification bar near your account controls, and I’ve found the notifications to be very sloppy. Near the top of each page is a search bar to help you find people, and next to that are 4 very helpful navigation buttons that allow you to jump between Home, Photos, Profile, and Circles. 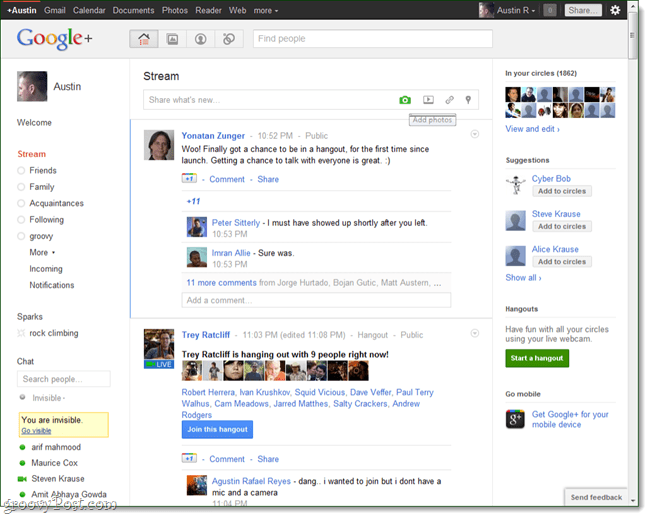 One thing I like about Plus is how simple the profiles are, and it also allows you to adjust the privacy settings for every piece of data you enter.  You can even go as far as to specify only specific people, or groups of people, to view information about you.  The front of the profile displays your posts and unlike Facebook, other users won’t be publishing material here unless it is a comment on one of your posts. 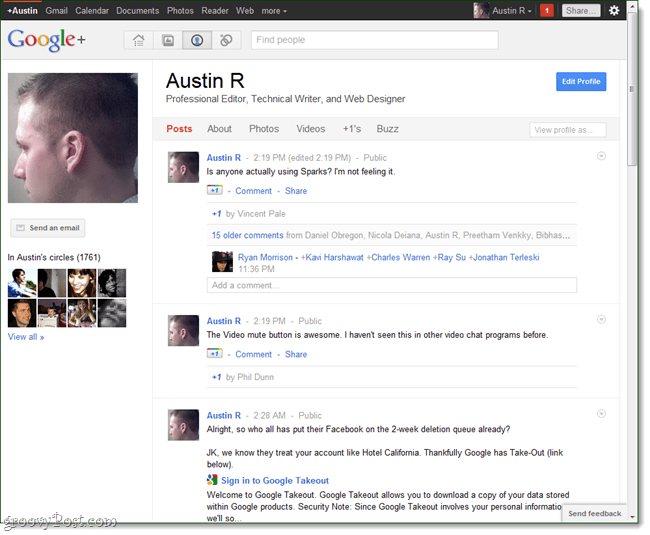 You can call them groups, call them labels or lists, but Google calls them “Circles.”  A Circle is the container that Plus uses to sort out your contacts and manage who you share items with.  If you were to ask me how these are different than the groups that Facebook has to offer, I couldn’t tell you much, except they are more complicated.

Adding people to a Circle is relatively simple, however the “Find and Invite” tab is easily overwhelming if your Gmail account has more than 50 contacts.  At this point, adding contacts truly feels a bit sloppy, but the interface is smooth and the animations are appealing. 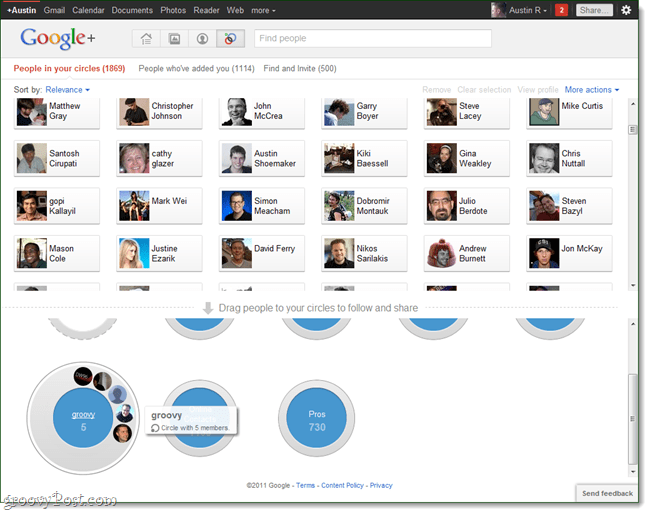 The entire Plus experience revolves around circles, but two key areas will benefit the most from them being properly set up.

The Plus Home tab displays your Stream as we talked about above.  But, you can use Circles as filters to choose which messages will appear in your Stream. 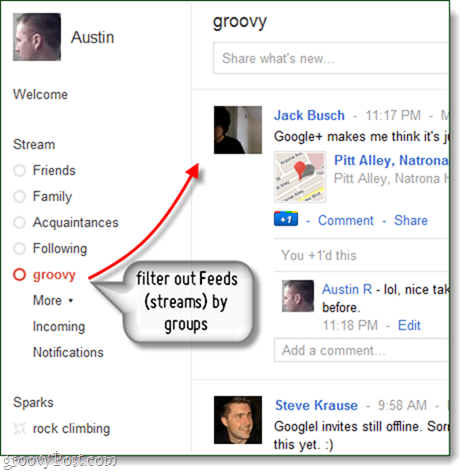 Now, it’s not quite as useful as Google Wave, and that is because the Streams only segregate data based on the user that sent it, unless the sender specifies a message only goes to a specific Circle of their own.  Unfortunately, at this point it gets rather confusing because there is no way to synchronize circles between users.  And, if you have one contact added to multiple circles then they will still receive the message and have no idea who else received it too.  As a result, the only real way to manage groups of people is to assign one leader and that person invite everyone into a hangout.  With that sad, privacy is really broken… but that is a whole other story.

For a touch of eye-candy, Photos work great with Circles.  When people in your Circles share photos, those photos go into a groovy looking feed that will display comments and allow you to easily join in on the conversation.  I also like the fact that it functions much like Google’s regular image search, but social. 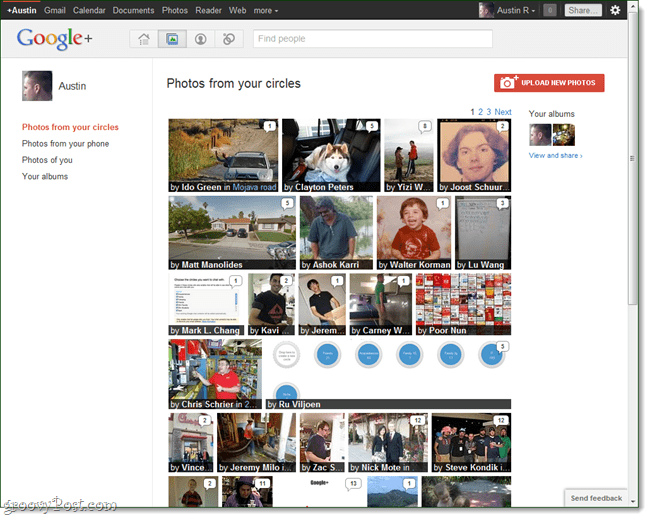 If there is one part of Plus that I can say Google nailed, it’s Hangouts.  Hangouts are basically big Skype parties. Though video and audio are not required (a text chat box is included on the side), if you want to get the most out of Hangouts you’ll need to a camera and a microphone.  What makes Hangouts so darn groovy is that you can just open one up, set who you’d like to allow to join in and then just go back to your homework or whatever until someone joins in.  There’s no calling involved, no complicated invitation process.  It’s all very simplified, and all done within the Google Plus infrastructure.

Just want to do some homework after class and let your study partners jump in?  Easily done. Or, maybe you want to rock out on your guitar and give friends, family, and band-mates a chance to listen or even join in.  There are a ton of possibilities. 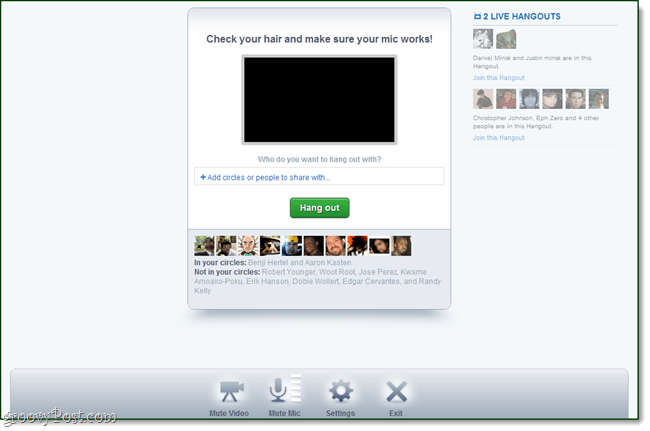 Hangout sessions function as a group webstream with everything happening simultaneously.  The idea is to recreate the same lack of structure that happens when friends get together in real-life.  You would think that 2-20 webcams and audio streams going across simultaneously on everyone’s screens would be chaotic, but it works better than expected as long as one person isn’t an Interrupting Ingrid (though if they are, you can mute them).  But, if you don’t have high-speed internet you’re not going to be using this at all.

Two features of Hangouts stood out the most to me.  The first was that you can add a YouTube video stream to the Hangout and watch it as a group.  The video syncs between all viewers, you can even pause and rewind it while other viewers see it pause as well.  But, the other thing I noticed was the Video Mute button, which adds some nice privacy control. If you see someone jump in the Hangout that you don’t want seeing you, just push the button to instantly cut your webcam’s stream. 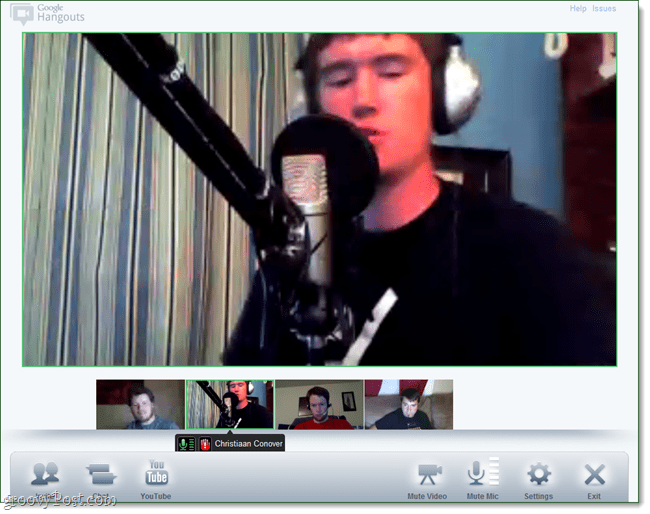 At this point Sparks is pretty horrible and basic, so we’ll skip it for now (sorry google…).  Sparks is supposed to be like an interest feed.  If you’ve used Stumbleupon, you’ll know what that means.  I’m hoping they fix this up soon, so stay tuned.

Along with the Plus service, Google introduced two new privacy control areas.  The one built into Plus is called Data Liberation, and it will allow you to download a copy of all of your data stored on all the different parts of Plus.  To be specific, you can: 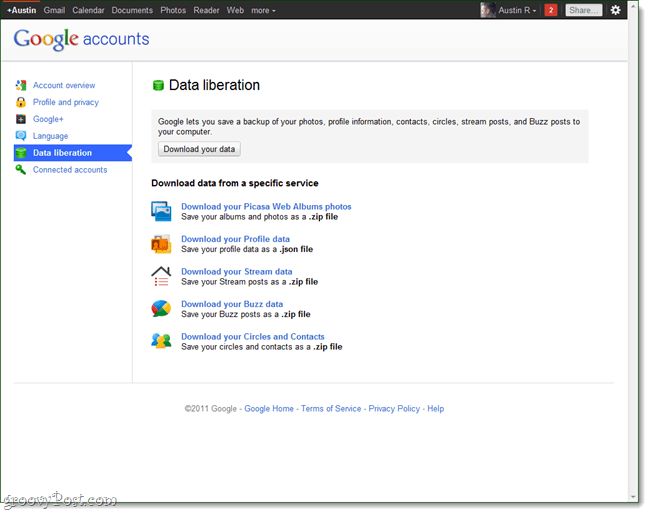 The other privacy control is called Google Takeout.  Takeout lets you download your personal data stored on ALL of your Google services (except Gmail, which can be done separately). 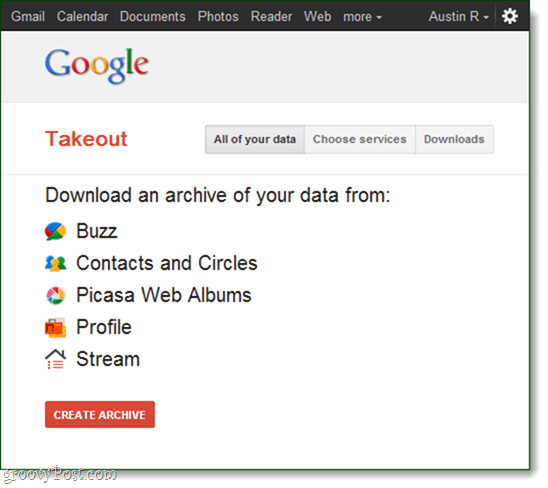 The reason these two tools come in handy, is that Google allows you to easily delete your account, profile, and anything else.  Takeout allows you to backup all of the data you have stored on Google before shutting down services attached to your account.  It’s a groovy step in the right direction, and one that Facebook has turned a blind eye towards.  Oh, and speaking of privacy, be sure to read up on the Google Plus Privacy Policy before you add all of your personal information; I gave it a quick glance and it didn’t seem to have anything out of the norm.

After test driving Google’s new social network for a day and a half, I can say that it needs a lot more work.  The notifications need cleaned up, Sparks needs a total revamp, and there are plenty of general bugs and glitches to squish.  The project isn’t on par with being “enjoyable” or “revolutionary,” at least not yet.  But, I can say that I already do like it more than Facebook.  There are certainly more privacy controls, and they are way less complicated to setup.  I also like that Google Plus already has group video chat, and Circles is like “groups” 2.0.   Google+ (Plus) is a big step into the social game for Google.  But, where Buzz and Wave failed, will Plus succeed?