Earlier, I gave a rather ebullient guided tour of Windows Live Sync Beta 2011 (which will be known as Windows Live Mesh when it is officially released), touting its groovy potential as a backup tool and cloud storage solution. But since that brief honeymoon phase, I’ve had a chance to move in some of my stuff and I’ll have to admit that I’m having trouble getting comfortable. It seems that much of the pampering I’ve received from old faithful Dropbox has given me some pretty high expectations when it comes to cloud-based syncing and in spite of my optimistic review, I think I’m going to have to stick with Dropbox—for now. Here’s why:

Windows Live Sync Beta’s public folder and file sharing capability is really just handled by Skydrive. And when it comes to sharing files with Skydrive, the experience is clunky to say the least. It’s all done via email invitations, and if the recipient doesn’t have a Windows Live account, they are out of luck. You can share folders publicly via Windows Live Spaces, but again, it’s another step, another sign up process and another layer of “stuff” to navigate.

Dropbox, on the other hand, is very intuitive—in fact, it’s so friendly, it’s downright social. You can right-click and get a shareable link right from Windows Explorer or the mobile app and anyone can view it. Dropbox even has its own URL shortening service, making it highly Twitter and Facebook friendly. No sign-ups or registrations required.

There’s no contest here—Windows Live Sync Beta has it, Dropbox doesn’t. It’s a small victory, however. In spite of Windows Live Sync Beta offering one of the most user-friendly remote desktop experiences I’ve seen, I can’t say that its something I personally look for in a cloud sharing/syncing application.  Normally if your geeky enough to need to connect into a remote system, you will have 4 other ways to remote into your home/work box anyway.  Still, point Windows Live Sync Beta. 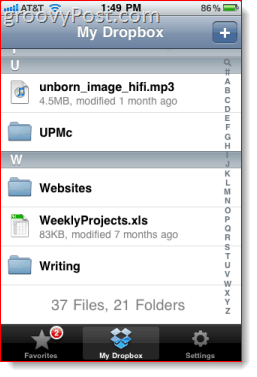 Same story here, but in reverse: Dropbox has it, Windows Live Sync Beta 2011 doesn’t. Dropbox has a stellar iPhone, iPad and Android app that goes above and beyond in terms of functionality. You can pull up files from your Dropbox folder from wherever you are and you can even upload videos and photos directly. I’m also a pretty big fan of the Favorites feature—it lets me take my daily checklist that I usually keep in my Quick Launch bar with me wherever I go. For the more ambitious, you could even include multimedia files for on-the-go accessibility. You can also grab shareable links and put them in an email or copy them to your clipboard in a snap.

With all that being said, the previous version of Windows Live Mesh did have some mobile support—you could upload images via m.mesh.com. Not quite an app, but it could mean that Mesh 2011 might carry over some of its mobile functionality into its official release.

This one was a bit closer—Skydrive has the distinct advantage of being hardwired with Office Live Workspace, which gives you a sort of best of both worlds between Google Docs and Dropbox. Skydrive and Office  Live Workspaces makes complete sense for handling Word files, spreadsheets and other collaborative documents.

Windows Live Sync Beta may have won this one—that is if Dropbox’s web-enabled features weren’t so excellent.  Namely, I’m talking about the Undelete and Previous Versions features. Dropbox’s ability to recover old versions of files has saved my skin (and hours of work) more than once. And while saving me from the consequences of being a clumsy oaf who occasionally overwrites or deletes a critical file may not be to my long-term benefit, I’m extremely thankful that for now, I won’t have to learn any hard lessons about backing up files. Speaking of backups…

The ability to perform unlimited syncing between machines with Windows Live Sync Beta really had me excited. The problem: it doesn’t work yet. At least not for me. I had this master plan where I would sync my iTunes folder across all of my machines—40 gigs in all—so that when I made changes to my main machine, the songs would automatically get sent to my other computers without an additionally importing. However, I never made it past the initial syncing phase because about 1 percent of the way through, the WiFi in my entire house went dead. I’m not saying that it couldn’t have been Comcast’s fault or my router’s fault—but I will say that as soon as I closed Windows Live Sync Beta, my WiFi started working again shortly after. And this happened each time I tried to “back up” my music to another machine. I even tried it with a smaller folder—about a gig worth of music—and it happened again. Hopefully, this bug will be fixed with the official release of Windows Live Mesh, and at that time, I’d have to say that Mesh could be the winner in this category, since Dropbox doesn’t have an equivalent “unlimited” PC-to-PC syncing feature.  But until then, I can’t give out any kudos for an application that breaks my wireless Internet…

Your Skydrive gives you a whopping 25 gigs of online storage—but for some reason, only 2 gigs of that is available for us by Windows Live Sync Beta. Beta users complained big time, so Microsoft threw us a bone and promised to up it to 5 gigs ones it comes out of beta. Dropbox gives you 2 gigs for free  and charges you extra if you want more—but  I may know of a groovy way to get 6 gigs of free additional Dropbox space for a total of 8 gigs, which nudges it into the lead.

Still, I’m calling this one a tie. Out of the box, both give you 2 gigs—but Mesh users can (or will) get 5 gigs without jumping through any hoops. Plus, that 25 gigs worth of space on the Skydrive sure looks cozy, and I’m betting that eventually, Microsoft will open it up for use via Mesh. Plus, that space is there for you to use through the web interface, if you really need it—with Dropbox, it’s 2 gigs no matter how you slice it that is unless you want a paid plan.. nahhh 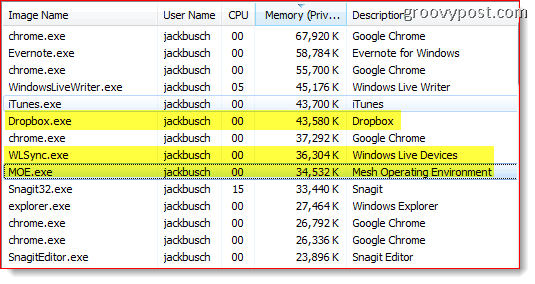 This is another category that might not be fair to declare a winner for, since Windows Live Sync Beta is a pre-release and Dropbox has been around for years. But I’m doing it anyway, and the winner is Dropbox. Dropbox just feels friendlier and less obtrusive overall. I appreciate the wee little blue logo next to the folder that reminds me which folders are being synced with Dropbox (as if I’d forget—its named “My Dropbox”). I like the system tray or Growl notifications that let me know when a file has been added or deleted. I like the “Recently changed files” menu on Dropbox. I like the ability to pause syncing and limit bandwidth (come to think of it, including such a feature in Live Sync Beta may have fixed my broken WiFi problem). Dropbox also allows proxies and Selective Sync (i.e. choose which folders within your Dropbox folder to sync).

I also like how Dropbox handles conflicted copies a little bit better. Both Dropbox and Window Live Sync Beta will avoid overwriting a file if its conflicted, and instead will give it a date, but Dropbox goes the extra mile and identifies the machine where the conflicted copy originated from. And I feel like the Dropbox system is a little bit more reliable, though it’s hard to get a file to conflict on purpose the same way it would in a real world situation. And if all goes to hell, you always have Undelete and Previous Versions to fall back on.

All those little things add up—and so far, Windows Live Sync Beta feels a bit lacking when it comes to features that make you go, “Oh, that’s kind of nice to have.”  Plus. with Dropbox, there’s a whole host of unofficial tips and tricks that let you do just about anything with the program—including syncing any folder on your PC with Dropbox (not just your Dropbox folder) and linking Dropbox to Microsoft Office.

Again, I really think that Windows Live Sync Beta (or Windows Live Mesh—whatever you want to call it for now) has some real potential. But Dropbox has a serious head start, and for now, I’m trusting my important files with them.