If the level of sharing activity on the web is any measure, then the kindergarten teachers have certainly won.  In case you haven’t noticed, the nature of the web has fundamentally changed in the past five or so years, and sharing what we find on the Internet is as important as browsing in itself. With that in mind, quite a few app developers have been making strides towards evolving the web browser alongside the web itself by

bringing this element of sharing front and center. Where some seek to boldly reinvent the browser from the ground up—such as RockMelt and Flock—Cortex takes a different approach. Cortex is a Google Chrome extension, and the name of its game is speed. So far, I like Cortex’s style.

Let’s face it—we are lazy, lazy people. There’s really no urgent need for an app, extension or browser that lets you post links, websites and selected text to Facebook, Twitter, Tumblr or Instapaper. You can always highlight a link, copy it to your clipboard, log in to Facebook, paste the link into a new Wall Post, add a comment and share it. That really only takes about 30 seconds, presuming that you don’t get distracted on the way there (which is indeed a clear and present risk). But the fact of the matter is, that the more steps it takes, the more clicks it takes and the more seconds it takes to share something, the less inclined we’ll be to share it.

And that’s why I think Cortex is going to be a hit (it already has nearly 13,000 users). It not only allows you to share with your Twitter followers, Facebook friends and others in less than 10 seconds with only one click, but it makes sharing second nature—as easy as scratching your nose. That’s important because the easier it is to share, the more you will share.

What I like most about Cortex is that it doesn’t disrupt my current way of life.  I don’t have to install a new browser, I don’t have to put up with a new sidebar or toolbar, I don’t have to learn a new shortcut key or sign up for a third-party account that’s going to cross-post to all my media channels. All I have to do is click and hold for a little bit longer than normal and then…  bam! 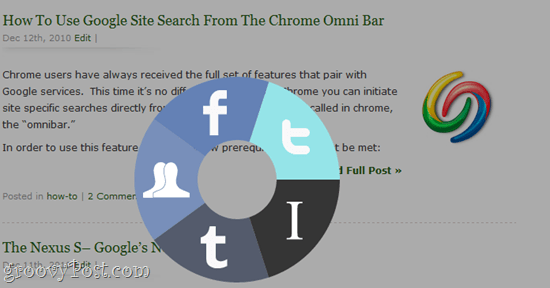 This ring appears around your mouse, allowing you to immediately share to any of your linked social media accounts. Simply move your mouse over the appropriate logo and release and it’ll be shared.

How fast is it? It’s so fast that I can afford to make an animated GIF of it without taking up all of our bandwidth:

Currently, you can use Cortex to share via Facebook, Twitter or Tumblr. You can also send links, pages and snippets to your Instapaper account.  If you simply Click and hold long enough for the Cortex ring to show up and then release over a button, it shares with the title of the page or link or the selected text along with a bit.ly link. But if you linger longer over a logo, you can add your own comment which will accompany the bit.ly link. 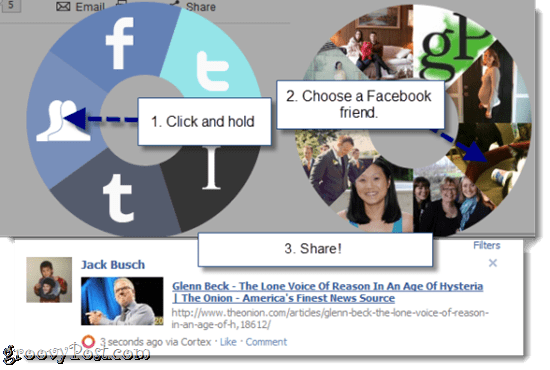 Setting up Cortex is simple—almost too simple, for some.

After you Install Cortex from the Google Chrome Web Store, the Cortex setup page will launch. Here, you’ll authorize your various accounts and choose your Facebook friends for your “speed dial.”

That’s all fairly straightforward—just remember to Click Next when you’re done, otherwise the Cortex setup window will pop up every time you launch Chrome.

You can change your settings later by Clicking the Cortex icon in your Google Chrome Toolbar. This also displays your history, which I like a lot. It includes thumbnails and snippets as well as a timestamp and the social network that you submitted it to. 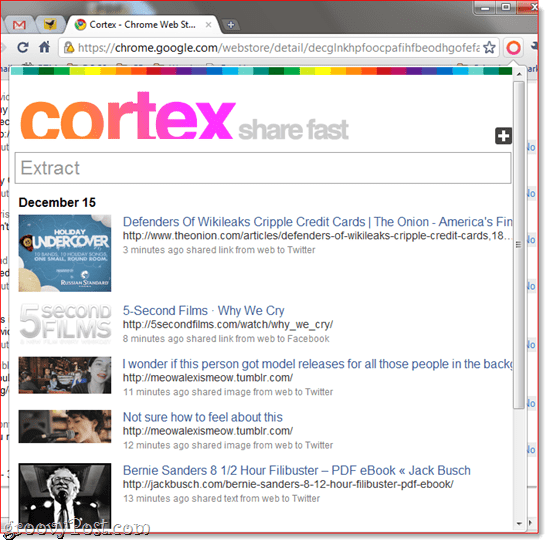 Your Cortex history also has a search box that let’s you narrow the results by a string. It’s a great way to jog your memory when you’re trying to recall that insightful link that you shared last week. 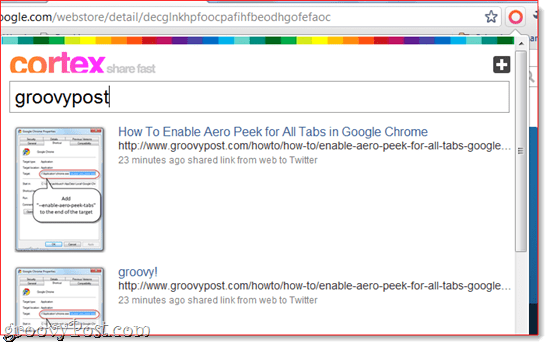 There really isn’t much else to say about Cortex. It’s simple by nature, and that’s what’s important. It’s not without its limitations, though. For one, it doesn’t work on HTTPS:// websites and those looking for more control of under the hood tweaks will find themselves wanting.  For example, you can’t change the behavior of the Cortex wheel, say, by increasing the delay or assigning it to another button. It might be groovy if you could have it assigned to one of the extraneous buttons on your mouse. Also, a few users have complained of Cortex popping in when they least expected it or intended it—such as when highlighting something to copy and paste it but not necessarily tweet it or share it on Facebook.

I have to say, that overall, that is Cortex’s biggest drawback—it has hair trigger sensitivity and in some cases, its speediness becomes a double-edged sword. For example, within 1.6 seconds you could accidentally share with your mother-in-law that you’re browsing a Twilight fanfic site.

But I really do think that Cortex is on to something. This is the way we were meant to share—fast, foolproof and unobtrusive. I encourage all groovyReadres to give it a whirl.