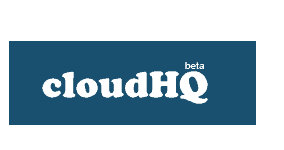 CloudHQ is the service I’ve been impatiently awaiting for months. Basically, it’s a cloud storage aggregator that keeps your Google Docs, Dropbox, SugarSync and Basecamp files all in sync via the web. It does so by plugging into the APIs for each of these services. In practice, this is a bit of a roundabout solution. But until Google or Dropbox or Basecamp comes up with a native solution, CloudHQ is the best alternative.

All I’ve ever really wanted out of life is to be able to edit documents with Google Docs and save them to my Dropbox folder. Or, edit a Google Docs file in Microsoft Office and have it sync automatically back to Google Docs and dropbox (for backup).  CloudHQ let’s me do that. It’s not the world’s most graceful solution (it’s still in beta), but it certainly works.  Here’s the official video explaining the service:

When you first sign up for CloudHQ, you’ll be asked authorize all the requisite services that CloudHQ needs to talk to. This is just like authorizing any third-party application to access Google Docs, Dropbox or Basecamp. Note: I don’t use Basecamp so I’ll only be looking at Google Docs / Dropbox integration. 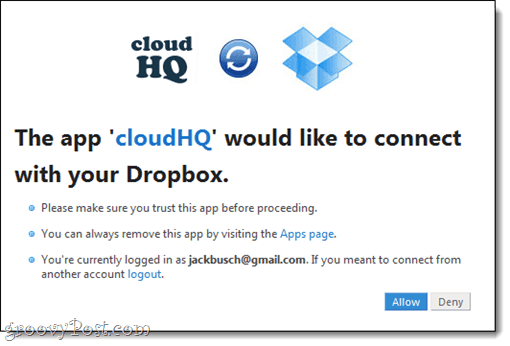 If, for any reason,  you decide that you don’t trust CloudHQ anymore, you can go ahead and Disconnect the authorization from either end. In CloudHQ, this stuff shows up in your Manage Services tab.

With your services linked up, you can go ahead and browse all of your files from within CloudHQ. Do this in the My Cloud Files tab.

You can download files to your hard drive and move them around in the cloud from here. This isn’t incredibly useful on a day-to-day basis. Without CloudHQ, you could just as easily download a file from Google Docs and then upload it through the Dropbox web interface or desktop client. But the Synchronize Files feature built-in to CloudHQ accomplishes this much more easily. See below: 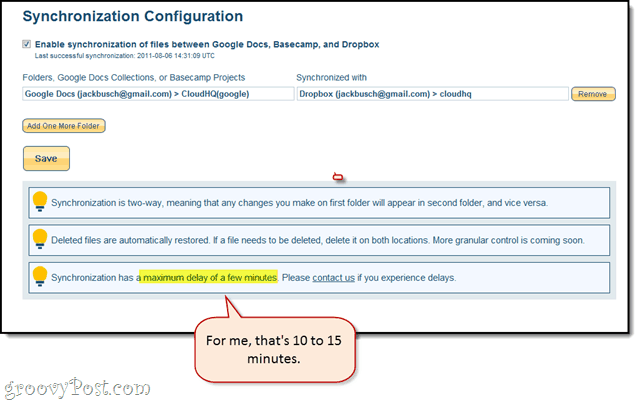 CloudHQ lets you sync folders between services by mapping them one at a time. So, in this example, I’ve synced the “Client Content” collection in my Google Docs account to my “CloudHQ” folder on my Dropbox account. Any changes made in either folder will be reflected in its counterpart. 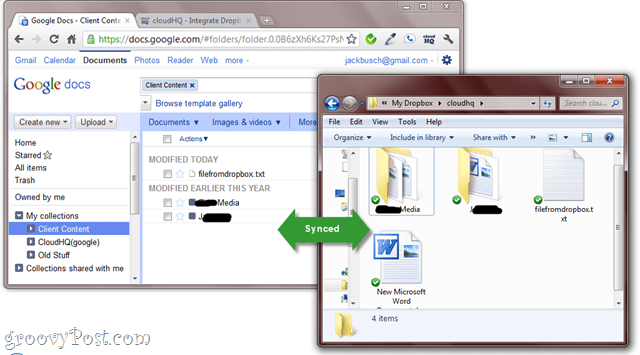 The big, big downside to this is that the synchronization is far from instant. When I did my initial sync, it took five minutes or so. But while writing this review, I created a new file that I wanted to sync back to Google Docs from Dropbox at 11:23 AM (it’s the New Microsoft Word.doc file you see in the screenshot). Now, it’s 11:55 AM and it still hasn’t showed up in Google Docs. Additionally, the folder you see in my Google Docs account called “CloudHQ(google)” still isn’t being recognized by CloudHQ.net, and is therefore unusable for the time being.

As mentioned in the Synchronize Files tab, syncing could take “a couple of hours.” That’s frustratingly vague.

Update: CloudHQ has since updated their sync method so that Dropbox / Google Docs files get synced within 10 to 15 minutes, in my tests. You do have to punch in your Dropbox Events RSS feed, though. CloudHQ will walk you through it when you log in.

That may be okay, say, if I’m going to spend the day working on a project out of the office and want it to be synced to my Dropbox for tomorrow or later that night. But if I’m trying to collaborate with someone in real time or have a doc ready-to-go and deliverable by a certain time, I won’t be super-thrilled to wait for CloudHQ to decide to sync my files. Because there’s no “Manual Sync” button and no indication of when the next sync will be, I’m probably just going to end up downloading the file from Google Docs and re-uploading it to wherever it needs to go or vice versa.

I suspect that this limitation has something to do with the API and what’s allowed by Google Docs. I don’t think Google would appreciate a third-party service pinging it every 30 seconds, nor would Dropbox. Multiply that by thousands of users and you’ve got a major bandwidth / DDOS issue. That’s why I kind of worry that CloudHQ may not be a viable option long-term. If this slow, unpredictable syncing is on Google or Dropbox or Basecamp or SugarSync’s end, then there’s no way CloudHQ can improve it.

That being said, when CloudHQ does perform a sync, it sends you a very nice report, including how many files were synced and whether or not there were any issues, such as file conflicts. 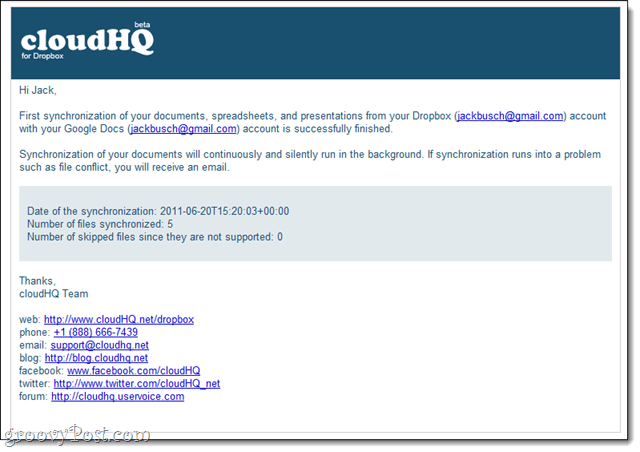 There’s also a Chrome extensions Co-Founder Selim Dizdar made me aware of this afternoon which supposedly lets you explore your Dropbox / SugarSync folders from within Google Docs, but I haven’t gotten it to work yet. Update: I’ve since had success with the extension, and it’s quite groovy. 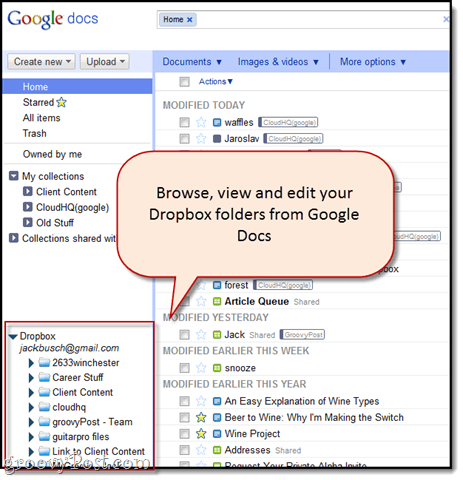 I really, really like the idea of CloudHQ. And it works, too. But the slow, unpredictable syncing is a killer. The interface isn’t particularly intuitive either—they could really benefit from a usability guy, or at the very least, a native English speaker to spruce up some of the text. That’s forgivable, though, because of the beta status. Right now, the service is free, but I’m curious to see how much they plan on charging for this. I’d like to see some more consistency and reliability before I shelled out money for CloudHQ. There will also be a free version as well as 30-day trial once the product leaves beta.