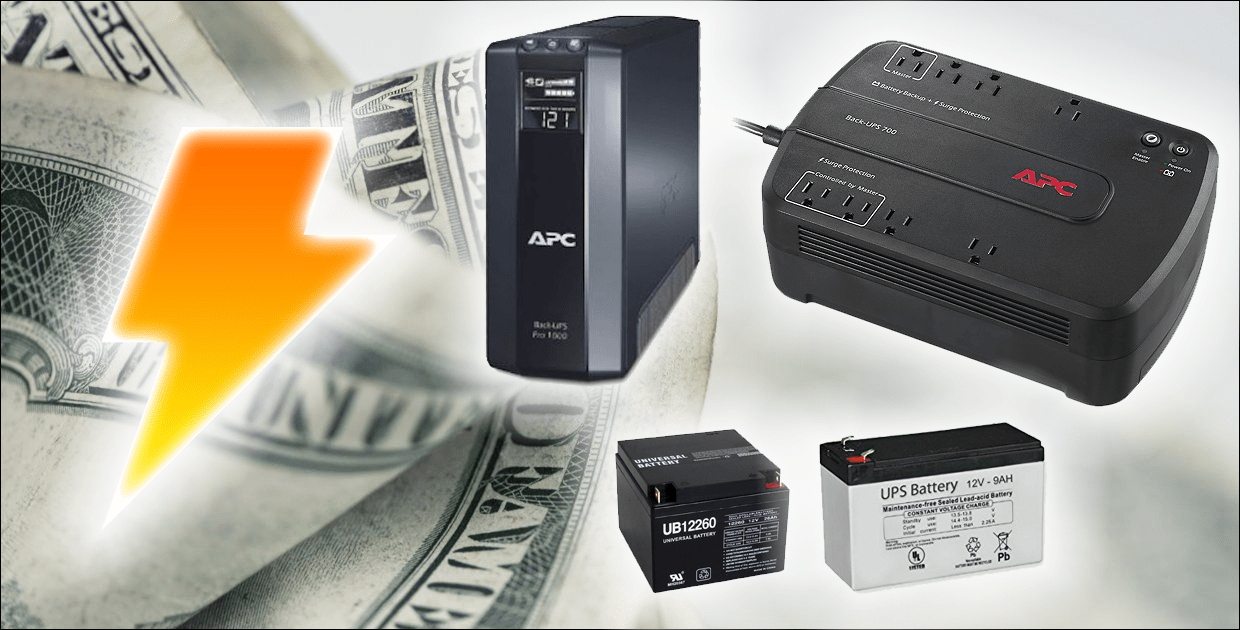 UPS battery replacements are easy enough to do yourself. The hardest part: finding the battery. In this post, we’ll show you how to crack open a UPS case and get a good deal on a replacement UPS battery.

Are your computers and other electronics connected through a battery backup and surge protector? They should be. Clean uninterrupted power can help prevent electronics from frying during storms, spikes, and surges. It also has the added benefit of allowing you time to save your work and shut down when there is an outage. Over time, these battery backups tend to “go bad” and stop powering devices on the battery-enabled outlets. This is rarely a sign of the UPS (uninterruptible power supply) going bad—more often than not, the battery inside the device is either expired or failed.  When this happens most people think it’s time to buy a new UPS, but with a little technical know-how, you can save your hard-earned cash by replacing only the battery.

Editor’s note: Opening up a UPS will void the warranty and may present a risk of personal injury or damage to your equipment. Before you begin, make sure your UPS is completely disconnected from power. Also, as Austin points out below, even a dead battery has a little bit of charge—avoid making contact across the terminals. Doing so may result in shock or cause a fire. Be warned. Proceed at your own risk. 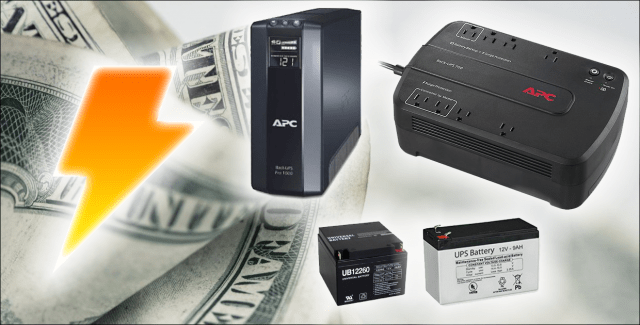 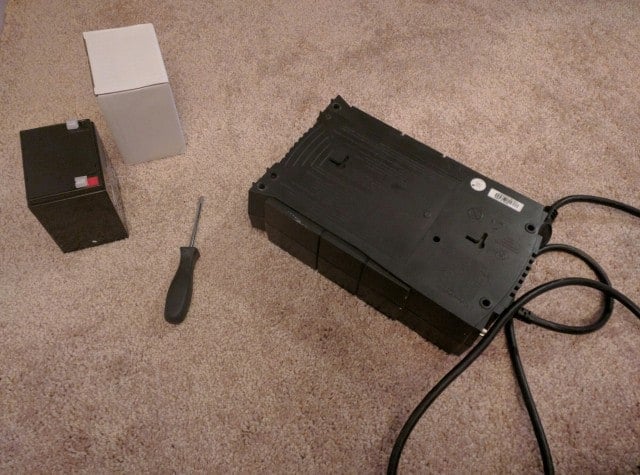 There is certainly a lot of variety when it comes to the construction of the UPS housing. Some units are tall with digital displays, while some are smaller with just a simple plastic case and a single operating button. I’ve replaced batteries in dozens, and the one thing I can tell you is that very few of them are built the same. Also, the cheaper units tend to be the most difficult to replace batteries in.

Today I’m going to replace the battery in a 485 VA Cyberpower (CP485SL) UPS. This is a relatively standard unit that has enough juice to power most lower-end computers or home entertainment systems. (Yeah, it’s not a bad idea to plug your TV and smartDVR into one of these).  I was donated two of these from a friend for helping him move; he knew the batteries were gone but figured I could fix them. He was right!

Now as said, on some models, you’ll have to take out every screw on the back to gain access to the battery. Luckily, in this case, there was only a single screw holding in a sliding plastic panel over a compartmentalized battery. 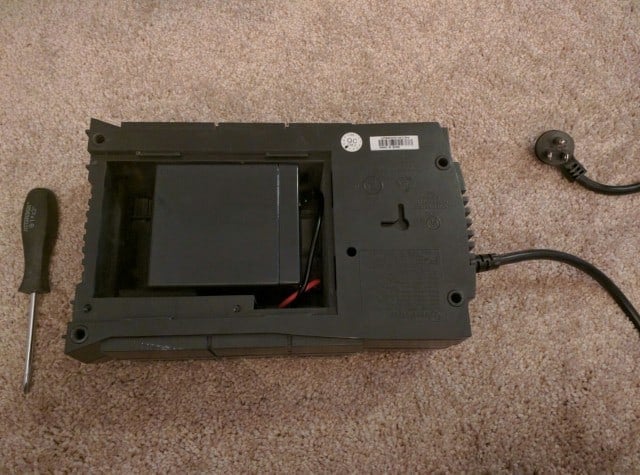 After you have access to the battery, the next step is to disconnect the two terminals holding it in. Nearly every model out there will have a battery that looks similar to this. The significant difference will be battery size. Keep in mind even though a battery says it’s universal that does not mean it will ergonomically fit in every UPS.

Warning: Now before you go full ripsnorter on this thing, remember that even on a “dead” battery there is often enough juice left to be dangerous if you bridge the two terminals. Keep any conductive tools (like your screwdriver) clear from touching the two terminals together. 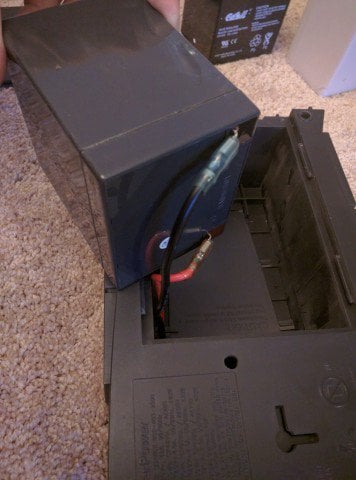 Safety Tip: The new battery should come equipped with some plastic terminal sleeves. I recommend moving these to cover the old battery as soon as you are ready to install the new replacement. 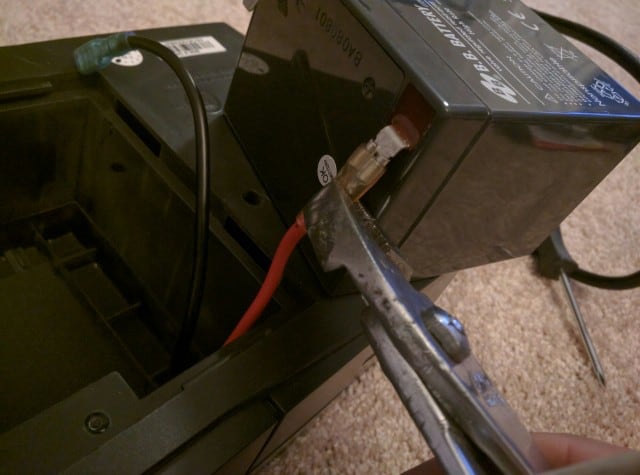 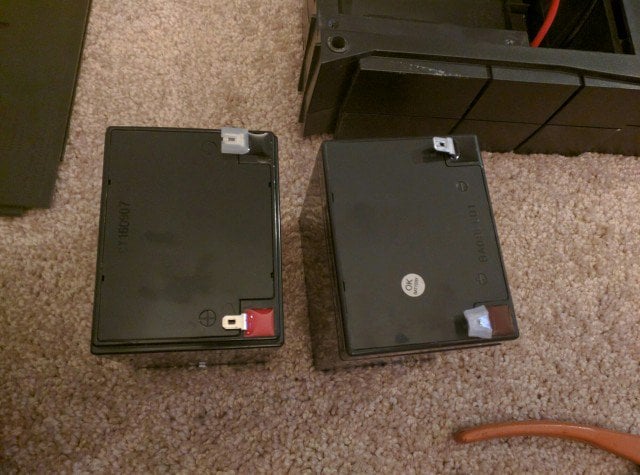 The wires should plug into the new terminal with ease. Once that is done just work in reverse order and reassemble the UPS.

Tip: On models that require extensive disassembly to swap the battery, you may want to test the unit before putting it back together if that can be accomplished safely. 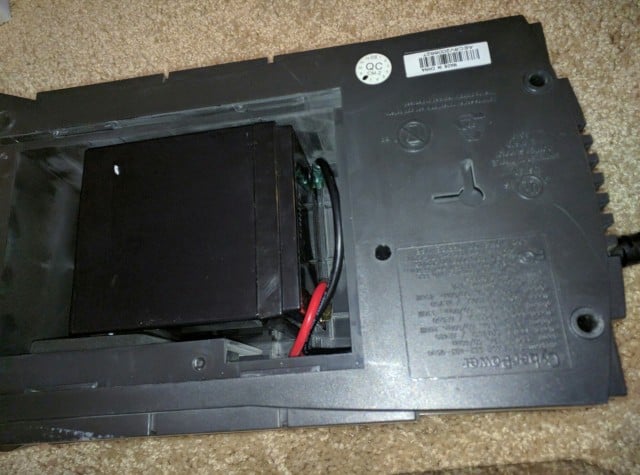 Now plug in the UPS and switch it on. A green light means you’re ready to go.

There you have it, just a few minutes of time can save you $30-$150 on buying a new UPS system when the old one was perfectly fine and just needed a new rechargeable battery. 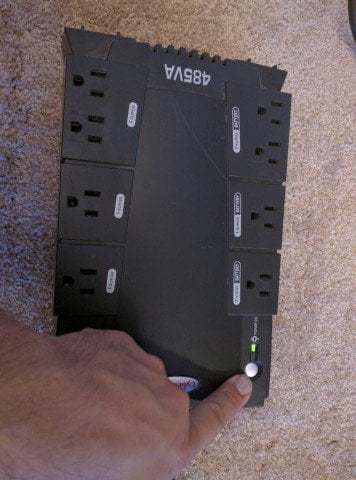 How to Find Replacement UPS Batteries

This can be the most difficult part of the repair: finding the replacement batteries. Before you fall into compunction over the order, there are two ways to find batteries that fit.

Prices are better in bulk! The best reason to buy all of the same UPS models for all of your electronic setups is so that when it comes time to replace batteries, you can save money. The prices are lower per battery the more you buy in a single order. For example, a single order of the battery for my UPS runs around $15 each, but when you buy two, the price drops to $12.12.  That’s about ~$3 saved per battery. In a 10-pack you can get them down to $7 apiece making them half price. 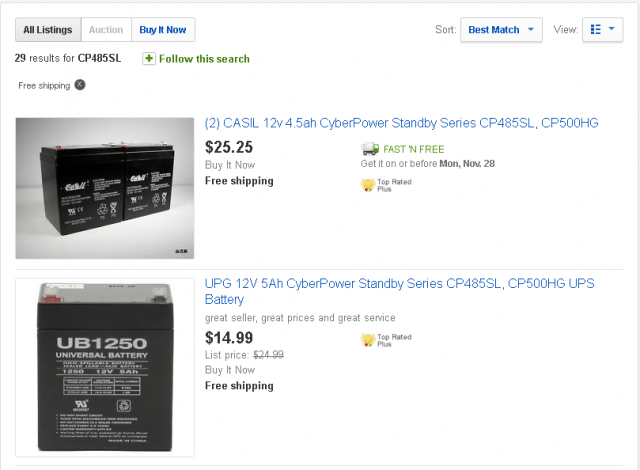