Here is a look at some answers to your questions as well as tech-related news.

Over the past week, we’ve received a lot of questions from readers.  While some questions were heavy hitters and needed an entire article to explain, we also received many questions that could be answered more simply.  This week’s Grab Bag was going to answer some of these simpler questions as well as highlight some of the tech industry news we just didn’t get a chance to write about this week.  Grab a cup of coffee and settle in, we have a lot to cover.

This Week’s Questions From Groovy Readers

I’m currently running Windows 7 RC.  I’m enjoying Windows 7 very much and I plan on purchasing it eventually, but I just spent all of my money on presents.  Do you know when Windows 7 RC expire?

How do I change the drive letter for my DVD drive so that I can share it over the network easier?

Changing the drive letters?  You’re in luck!  Check out our recent step-by-step article on how to change drive letters and paths in Windows 7.

My friend has downloaded and given me a pirated copy of Windows 7, it seems to run great –is there any advantage to going out and buying a legit original Windows 7 key?

The operating system is the single most important piece of software on your computer.  Using an unauthorized copy of any operating system can create vulnerabilities.  Recently many “Jail-Broken” iPhone users found this out when a worm took over their backgrounds and compromised their devices.  Using a pirated copy of Windows 7 can make things very shakey for a few other reasons.  Non-Genuine Windows software can make it difficult to update your system and leave you open to possible backdoors left open by the original hacker who created the pirated version.  Many times the pirated operating system will be packaged with malicious spyware and trojans.  Needless to say, you may not want to do any online banking or shopping where your personal and financial information is exposed.  Don’t forget also, that is illegal to distribute and use pirated copies of any software.

If purchasing Windows 7 is not an option for you, I highly recommend Ubuntu; a free, open-source, reliable solution.

My Windows 7 “Create New > Folder” button is missing from the context menu when I right-click the desktop or anywhere in Windows 7.  How do you fix this?

This is a fairly common issue with the Windows 7 context menu.  You can solve this problem with a registry fix.  From the Start Menu, open up regedit.  Once in regedit browse to the key: HKEY_CLASSES_ROOTFolderShellNew.

Here are a few things that have been introduced this week that were noteworthy enough to make it into the grab bag. 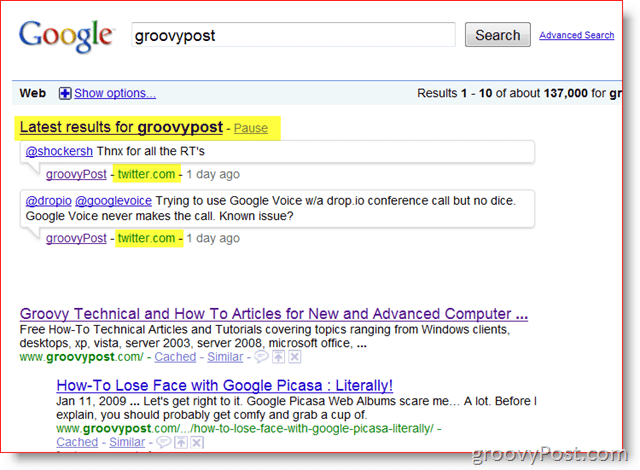 HUGE release at Google on Friday 12/11/09.  Slowing throughout the day Google rolled out a real-time search to all of its users pulling data from Facebook, MySpace, Twitter, FriendFeed, Jaiku, and Identi.ca.  The Real-Time data will be displayed in a box sometimes above or below normal search results.

Although the Google Announcement only lists a few sources for its real-time search, it appears they are also using other Google News sources as well.  For instance, if you type in Tiger Woods, data from News agencies and Papers are displayed as well.

Google Voice is asking for your help to improve transcription

Now, whenever someone leaves you a Google Voicemail you can opt-in to donate your voicemail to the Google Voice team.  Quite frankly the transcription feature is hardly accurate and could really use this boost.  Concerning privacy with this program, Google has stated

“The messages you donate may be listened to, manually transcribed by us and/or used to gauge transcription improvements over time, but they will never be made public or used for any other purpose than improving the transcription quality.” 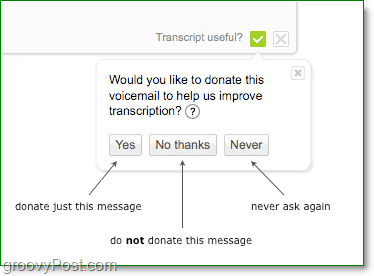 Mozilla has released their latest open source project, Thunderbird 3.0.  This new email client is the fastest around, and the features aren’t lacking.  Check out our full look @ the latest edition of Thunderbird in our groovy review.

We heard the rumors of this phone back in October and November, but now it’s official.  There still isn’t a lot of information out yet at this time, but this article in the Washington Post confirms that this week many Google Employees all received brand new Google Phones.  A phone built with purely Google branding, running an updated Android and HTC.  The phone is expected to be released to the public in early 2010.

This week Twitter adds its 4th language, Italian.  Previously the languages available were English, Spanish, and French.  With the new update, we can expect Twitter to continue implementing support for additional language.

It’s good to see Microsoft moving forward with Silverlight, or is it?  Either way, the new Silverlight 4 development kit has been released and we can expect to see even faster speeds when this latest version goes live.

Upgrade to a Google Number

This week Google announced that if you’ve been using Google Voice with your existing number, you can now upgrade your account and pick a Google Voice number. 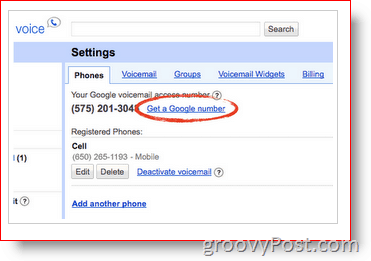 As of Friday 12/11/09, additional search suggestions will be added to your searches as shown below. 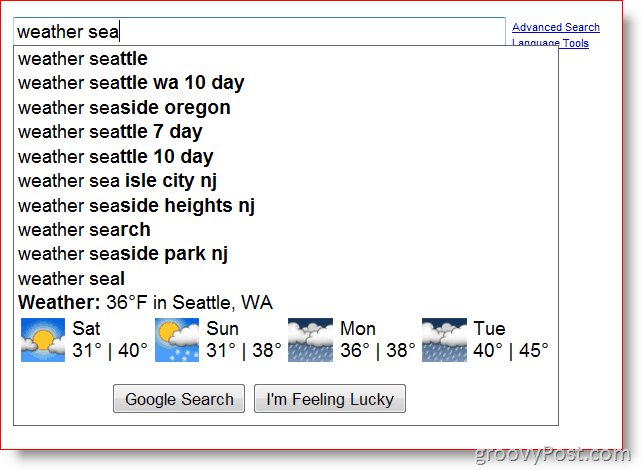 New Version of Google Mobile Apps for the iPhone Released

In this version, they have a redesigned search results display that shows more results at once and, more importantly, opens web pages from the results within the app. This will get you to what you need faster.  There are also upgrades to Search by Voice allowing to you choose your language or Accent (Australian for example).

Google Chrome for the MAC was released 12/8/09.  The release is a native MAC application that will support things like Keychain and Mac-style animations.