If you’re like me, you probably haven’t bothered to install Adobe Flash Player on your computer.  After all, Flash is mostly used to display online advertisements, and who wants to see those?  And, if you do need to use Flash just load up Chrome; Chrome has Flash built-in.  I know, I know. That still leaves your other browsers lacking one very important Flash feature –videos.  But, that might not be for much longer.  Google has been experimenting with HTML5 video across YouTube for over a year now, and you can try it out too.

To join in and try out YouTube sans-Flash, visit the HTML-5 experiment opt-in page.  You don’t have to be logged into an account or anything, the setting is saved to a cookie in your browser. 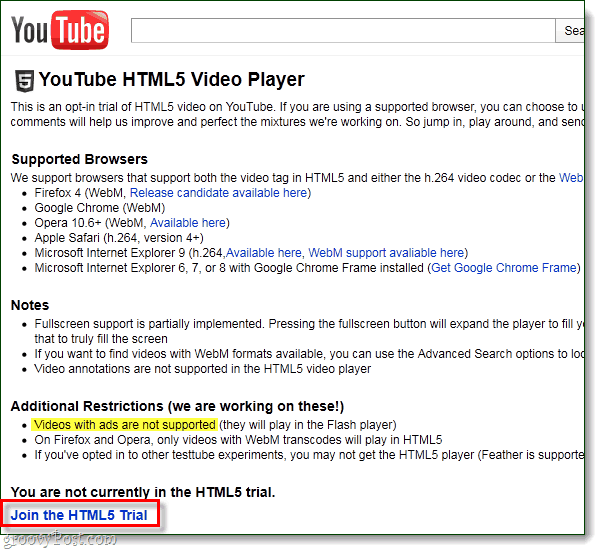 Once you’re opted in, YouTube videos will play in HTML5 instead of flash –if available.  Right now there are still some pretty major setbacks to it as noted on the op-in page.

So what’s the HTML5 player like?  Well, it looks just like the Flash video player.  It works like you would think it would, even if you don’t have Flash installed.  I’ve noticed performance isn’t as good though, but it is still too early to say that will be a problem that lasts.

If HTML5 worked for 100% of YouTube videos, would you give up Flash?  Let us know in the comments below.  And if you want to check out some other experimental YouTube features, check out the TestTube.