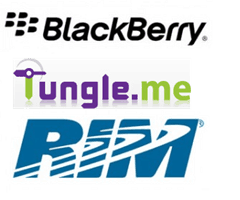 At groovyPost, we always enjoy seeing our old friends in the news. So, this morning when we saw that the social media feeds were all tweeting over the announcement that Tungle.me had been acquired by Research in Motion—the Canadian outfit responsible for BlackBerry—we thought: “Good for them.”

In our Tungle.me review posted last November, we deemed the hassle-free scheduling service highly groovy. The thing that we liked about it most was its laidback attitude that allows it to go with the flow in just about every platform and setting. There’s no signups required, and it plays incredibly well with virtually every other calendar service, including its would-be competitors, Google Calendars, Facebook Events, iCal and Lotus Notes. It even looks and works great on a mobile platform—currently it has snazzy apps for iOS and BlackBerry OS. An Android app is coming soon (it was pending in November 2010 and it’s still pending now—the fate of the Android port may be changed by the acquisition).

Future Support and Development of Tungle.me

Most of the responses to Tungle.me’s announcement were similar to ours. Congratulations are indeed in order, as in the world of software as a service and web app development, there’s a rule that all good things must come to an end…or get acquired. In some cases, web apps get bought up just to shut them down, as we saw with Apple’s acquisition of Lala.com (I know, I know I bring that up in just about every post, but I am STILL bitter about this).  Given this trend, more than a few users have expressed worry over the fate of Tungle.me. And rightfully so—it seems that we’re falling head over heels for a new service every quarter, just to have our hearts broken when it goes away.

Judging by the tone of the official announcement via the Tungle.me blog however, the end of Tungle.me doesn’t appear to be nigh. According to the post, the entire Tungle.me team has joined RIM and are all doing what they do best… for now. However, the verbiage does ring a little bit optimistic in terms of what’s in the cards moving forward. Read this [our emphasis added]:

This is exciting for you too as we expect the Tungle service to only get better. Our plan today is what it has always been – for Tungle to become integrated with your daily activities and be ubiquitous within the applications you’re already using. When you think scheduling, Tungle should be at your fingertips.

As of today, the entire team is joining the ranks of RIM. It’s playoff season and the Tungle team is focusing on putting the puck in the net for you, our customers.

All that’s a little too vague to be reassuring. On the surface, Tungle’s CEO Marc seems to be riffing off the fact that his new boss is Canadian (Tungle is Montreal-based). But the plan outlined in the first bit there is nothing but their usual elevator pitch. And the thing about playoff season is that, yeah, it’s exciting but by the end a whole lot of teams get eliminated. Let’s hope that wasn’t an unconscious premonition. Part of what makes Tungle.me so amazing is its responsive, personable staff (numbering 23 team members, by last count). It’d be terrible to see that culture get swallowed up by a big corporate restructuring.

Personally, I don’t think that will happen, though. In February 2011, Research in Motion acquired Gist—a social contact management company—and so far, all the vital organs at Gist seem to be intact to this day. It still has well-supported iPhone and Android apps, in addition to a BlackBerry app, plus plug-ins for Outlook, Firefox and Chrome.

There is some murmuring in the comments among users who are afraid that Tungle.me will shift its focus away from its iOS app, abandon its Android app and fire all the engines towards BlackBerry devices. That, I think, is also unlikely, since interoperability among platforms is part of the core of what makes Tungle.me useful.

Among the most cynical of voices is concern that Tungle.me has just hopped on to a sinking ship. With all the buzz that Android, iOS and Windows Phone 7 have been receiving lately, the analysis that BlackBerry has peaked may seem valid. But I think that’s a bit short-sighted, too. According to a recent Nielsen study, BlackBerry’s are markedly less coveted than Android and iOS phones, with 33 percent of respondents saying they’d prefer an iPhone, 26 percent desiring an Android and just 13 percent longing for a BlackBerry. In spite of all that, BlackBerry still commands a 14.8% worldwide market share which is nothing to sneeze at especially given its firm hold on Corporate America.

Most of the tech buzz blogs are focusing on a bright spot on BlackBerry’s horizon—its forthcoming BlackBerry OS 7.0, which, according to leaked software road maps, is expected to be based on the QNX mobile operating system. QNX already powers the BlackBerry PlayBook tablet. Although the PlayBook has received its fair share of criticism, sales have been strong—and the QNX platform shows definite promise.

Overall, I wouldn’t read too much into this acquisition. I think it’s good news. If anything, it means that Tungle.me’s survival is an even better bet, since they no longer have to devote as much energy to seeking out venture capital. I see this the way that most other onlookers see it—Tungle.me has arrived. Congrats!