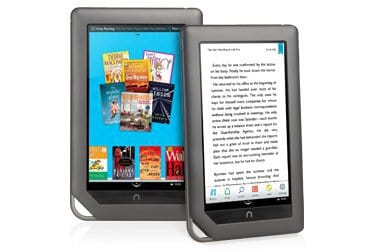 It has become quite common, it would seem, to announce that an e-book reader is your bestselling product ever. Amazon did it a few days ago, when they announced that the Wi-Fi Kindle has sold more than anything else in its history, and now it’s Barnes & Noble’s turn.

You guessed it, they’re talking about the NOOKcolor Reader’s Tablet. And, just as Amazon did, they’re giving no sales figures. At least the press release is more explicit than Amazon’s. It does say that the company has sold “millions” of Nook eReading devices and that “the line has become the company’s biggest bestseller ever in its nearly 40-year history”.

The press release also says that nearly one million NOOKbooks have been bought and downloaded, only on Christmas day.  The press release has absolutely nothing to do with Amazon’s and it just happened that they both came almost at the same time…

Now, it would be fun to see the sales figures for Nook and Kindle, just so we could compare them, but that doesn’t look too plausible.  Personally, I’m happy for B&N and I hope they can continue to hold in there against Apple (iPad) and Amazon’s Kindle.  Healthy competition is always good for innovation and the consumer!