On Monday we released a huge tablet comparison chart of the 2011 models, but all of the specs for the iPad 2 still remain closely guarded secret by Apple.  But, that should all change next Wednesday, March 2nd at the Yerba Buena Center for Arts in San Francisco @ 10:00am…

Below is the image that was delivered to everyone who received an invitation to the event.  It depicts the giant March 2 date being peeled back to reveal the corner of an iPad.  This doesn’t absolutely confirm that the iPad 2 will be announced, but we’re 99% sure that it will be. 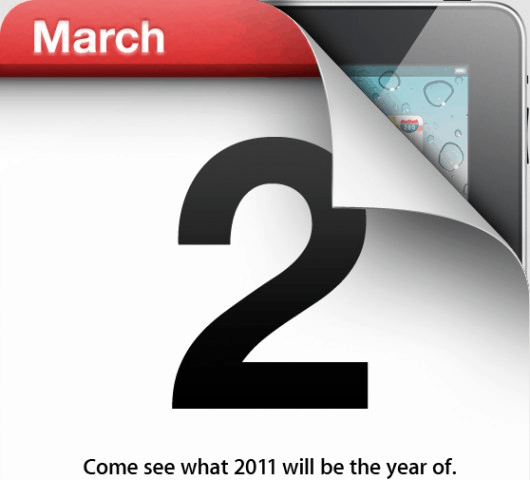 Additionally, according to a Foxconn leak via AppleInsider, they’ve already set into production for roughly 5 million iPad 2s.  If you compare that to last years ~4 million, it sounds just about right.  There hasn’t been any clues about the specs yet (other than faster, better, etc..), so we’ll have to sit on it until next week when Apple makes the official announcements.