On Tuesday, Google released an update to their Google Voice Web App. It fully mimics the same functionality using HTML5, as most AppStore downloaded apps.  This web app has many new features and is visually stunning when compared to the previous process we’ve written about on groovyPost.  Although it doesn’t yet use my 3G or WiFi connection for full VOIP (please google!!!), it’s still VERY groovy.  Let’s take a look!

We’ve mentioned the free texting in Google Voice, but that is just the beginning.  One thing to note is that HTML5 is only available in OS 3.0 or later iPhones/iPods, so you will need to upgrade if you want to use this web app.  Other supported devices include Android phones, BlackBerry, Palm WebOS, Nokia S6, some Windows phones, and others.

The new Google Web App features a full-screen dialer and also gives you a more functional inbox.  One feature that was not previously available is the ability to display your Google Voice number on the caller id for outbound calls; now you can. 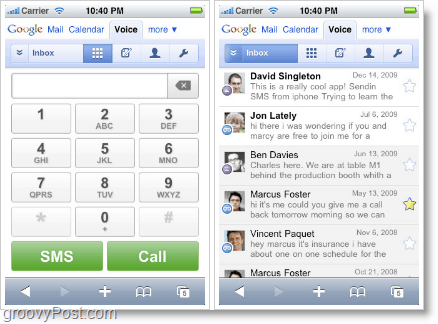 Try out the Google Voice web app for yourself at m.google.com/voice.